The case of one-way streets

Another common recommendation from urbanists in North America is the elimination of one-way streets, especially for main streets. The reasoning being that one-way streets reduce the access to commercial main streets, thus reducing their ability to reach certain customers and making businesses lose visibility. So I thought I might give my 2 cents as a traffic engineer on why certain cities have made their main thoroughfare one-way, and the impact on traffic and safety.

The reasons why certain streets have been made one-way

First, let's get a particular case out of the way. Certain residential streets in dense areas have been made one-way not for any traffic engineering reasons, but only because the street is relatively narrow and the planners wanted to have parking on both sides of the street, which didn't leave enough room for more than one travel lane in the center of the street.
This is the kind of design that tends to be present only in old, dense areas of cities, where buildings have no off-street parking spots, where streets are relatively narrow and are in a strong grid format, allowing for easy detours. In recent developments, these conditions are pretty rare, streets are rarely in a grid, streets tend to be wider and there tends to be more off-street parking.

Some areas have also learned to use these one-way residential streets as a way to deter through traffic in residential areas, creating a maze of one-ways for cars despite the grid-like street network. Especially when a street's one-way direction changes, forcing people off the street to continue ahead.

Anyway, this type of one-way street tends to be of limited applicability. So let's look at a more contentious application, namely the one-way arterial.

OK, so what is the main point explaining why an arterial would be made one-way?

You might have expected it, it's about throughput capacity mainly. The main reason why one-way streets perform better capacity-wise is that what limits street capacity is intersections, and left turns especially can have a deleterious impact on capacity due to the conflict with vehicles coming from the opposite way. Left-turning vehicles therefore have to either wait for a gap in oncoming traffic, or have a separate phase (during which the flow of vehicle coming the other way will be interrupted). This is especially bad when the number of left-turning vehicles is high and when they share a lane with vehicles going straight.

With one-way streets, there is no issue with left-hand turns, they have the equivalent of a permanent priority phase.
What if you have a lane for left-hand turns only? Like the famous "road diet" design with one lane allowing straight and right-turns and a lane only for left-hand turns? Well, in that case, the effect of going one-way is even greater as it allows to have three lanes in each direction rather than just two, increasing throughput by at least 50%.

So that's an obvious reason why traffic engineers find the one-way solution so attractive. When the goal is to move as many vehicles as possible in an hour, it is a very good solution. When the street is not capacity-constrained though, one-ways impose detours and can be annoying for drivers. But what are the effects of one-way streets aside from capacity? Are they safer or more dangerous?

All else being equal, one-way streets are likely to result in faster speed in vehicles. Why is that? Because you are increasing the number of lanes per direction per street. When there is only the one lane going in one direction, the speed of traffic will actually be determined by the slower drivers, because drivers who tend to drive faster will be stuck behind them, not being able to pass. This keeps speeds low, obviously. When there are two lanes per direction, faster drivers have the ability to pass slower drivers, not only does this allow them to drive faster, but the effect of many cars passing slow drivers might intimidate these to speed up to match the speed of other vehicles on the road.  In effect, traffic speed is determined by the faster drivers.

So the more lanes per direction on a street there are, the higher the speed is likely to be. It's not the only factor, but it's an important one.

Higher speed is actually a mixed bag. For the traffic engineer, higher speed means higher mobility, which is generally an objective of their job. However, higher speeds in urban areas can mean more noise and more serious accidents, because kinetic energy increases with speed to the power of 2.

I know what some will say: why the hell would I want faster streets in my city? That's a good question, but in the end, in the modern economy, you need reasonable fast mobility for some trips in order to be able to tie regions together economically. Not all streets need to be fast, but some reasonably fast streets make sense to facilitate longer distances, and also to enable faster transit. In Montréal, it isn't rare for bus lines on one-way streets to be 50% faster than similar bus lines on similar streets that happen to be two-way streets.

For pedestrians, one-way streets are actually not that bad, because they simplify vehicle movements, so they only have to look in one direction before crossing, whether at intersections or mid-block. This increases predictability for pedestrians, which is crucial for safe decision-making.

Also, one-way streets avoid one major issue that is often seen at intersections with traffic lights, the left hook. The issue here occurs during regular green lights that allow left turns while oncoming traffic still has its green, meaning the regular round solid green light. Drivers turning left thus have to wait in their lane for a gap in the traffic in front of them, which is where their attention will be concentrated.

When the driver sees a gap in the traffic in front, especially if traffic is heavy and he is frustrated, he will quickly exploit that gap and accelerate quickly to turn left across oncoming traffic. Meanwhile, not only was his attention not to his left, but the traffic is likely to have impaired his visibility of the pedestrian crossing to his left... 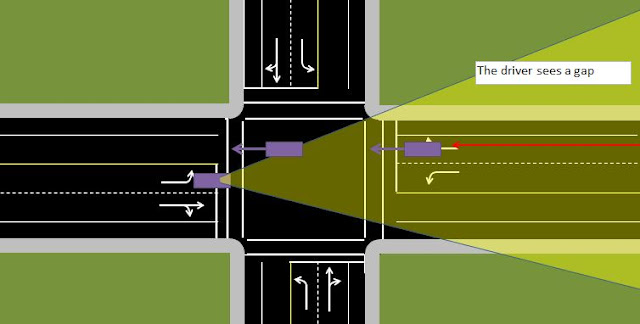 So if a pedestrian was crossing the street at the same time (or worse, a cyclist), you will have a dangerous situation where the left-turning driver is accelerating quickly towards a pedestrian he has not yet seen, which may result in a dangerous crash.  Even if the driver manages to stop before hitting the pedestrian, he becomes vulnerable to a side crash by the oncoming vehicle to his right.

With one-way streets, since there is no oncoming traffic, left-turning drivers will tend to keep their attention to their left, where they are going, which puts any crossing pedestrian well within their line of sight. Since they also don't need to exploit a gap, they may also accelerate slower, without a feeling of urgency.

So this is all theoretical, do we have some empirical data? Well, more or less. Recently, a graph of pedestrian crash hot spots was made of Montréal, and I used my own knowledge of the streets to identify one-ways and two-way streets, superposing both to see if a pattern can be found:
I know from experience too that there are tons of pedestrians on all streets I've identified, so you can't explain away the discrepancy with the number of pedestrians. At worst, you can say there is no great difference in accidents between one-way and two-way streets, at best, you can notice a trend toward a lesser number of accidents on one-way streets. So I guess it confirms my intuition that one-way streets, for a similar number of lanes, do not decrease pedestrian safety, but are likely to increase it somewhat, at least at intersections.

First, say hello to my "friend" the WB-20 (Which due to my job I have dubbed in French the MCAM.... Maudit Camion À Marde... Goddamn Fucking Truck):
What is a WB-20? It is the term used to describe the design vehicle for which all roads that receive Federal funding in the US have to be designed. It represents a semi-truck pulling a 53-foot trailer behind it. This is the usual truck size in the US, and since Canada is the US' toy poodle, the US standard has also been adopted north of the border.

This truck is the death of old towns. Why? Because to simplify freight, trucking companies much prefer to stick to the 53-foot trailer size, even for local deliveries. But city streets aren't made for such huge behemoths, even North American main streets. This might be part of the reason why many stores prefer the periphery over a main street location, to avoid the hassle of having 53-foot trailers making deliveries down narrow streets.

In comparison, most of Europe limits trailer sizes to 12 meters (40 feet), which North American norms call a WB-15, which turns much better:
Note that an alternative might have been to adopt a standard of trucks pulling two shorter trailers, which, like articulated buses, result in a better turning area:

Anyway, the WB-20 standard also explains why most highways have extremely wide curbs at intersections, exactly to allow this kind of vehicle to turn.

Unfortunately, these trucks are the lifeblood of the economy. They deliver materials to factories then deliver goods to businesses. It sucks, but it is what it is, if you want a city to be economically viable, it is best to find a way to welcome these huge trucks on streets. Yes, I know it would be best to force truck companies to use smaller trucks in cities, but unless the regulation is made at the national level, I doubt it would be enforceable.

So let's look what a turning WB-20 would look like on a "road diet" street with 1 lane per direction plus a center lane for left turns and space for parked cars on either side (about 13 meters wide minimum, 44 feet): 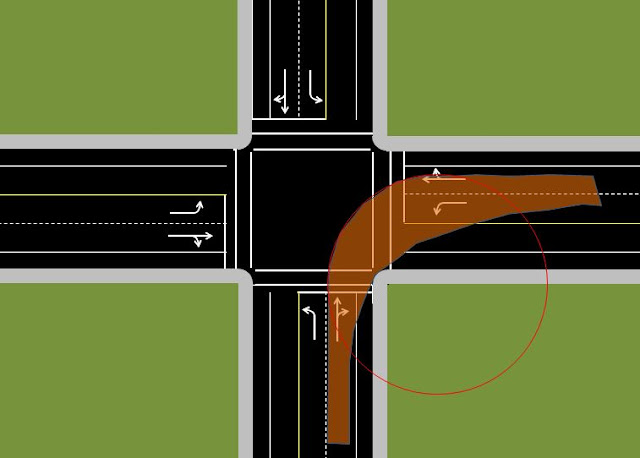 Notice the problem? A truck in its right lane turning right would need to get on the wrong side of the street for nearly 20 meters (nearly 70 feet). Since there may be cars stopped at the stop line, that stop line would have to be pushed WAY back. It's obviously not a comfortable situation for anyone. You could also widen the street with a big curb at the corner... 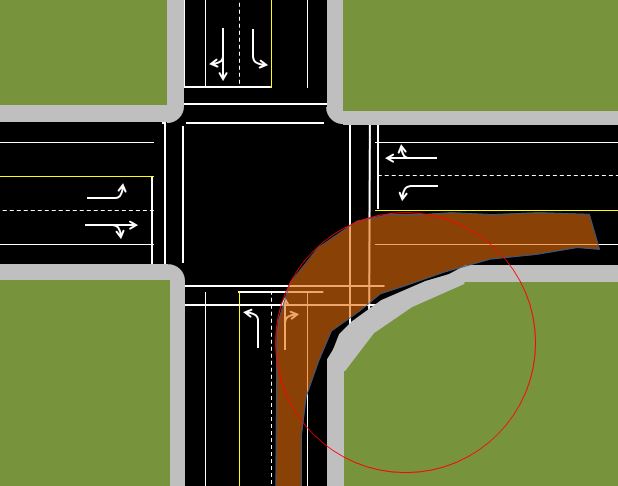 But in many ways the cure is worse than the disease, especially since pedestrian crossing length would jump from about 14 meters to 22 meters if done on all corners. If you think this is just theoretical, think again, why do you think intersections like these ones are made? 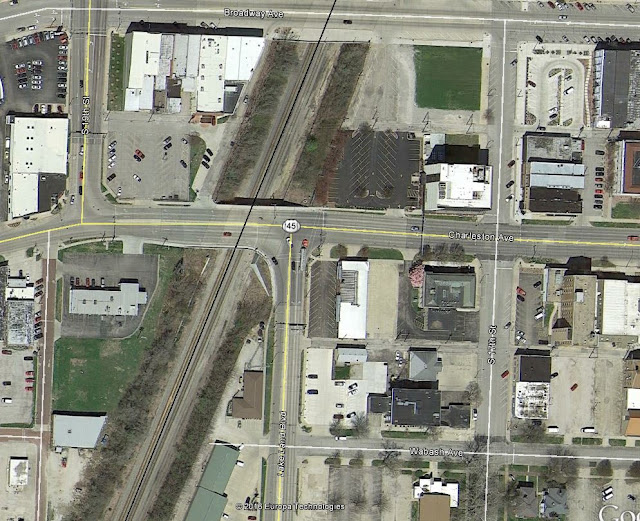 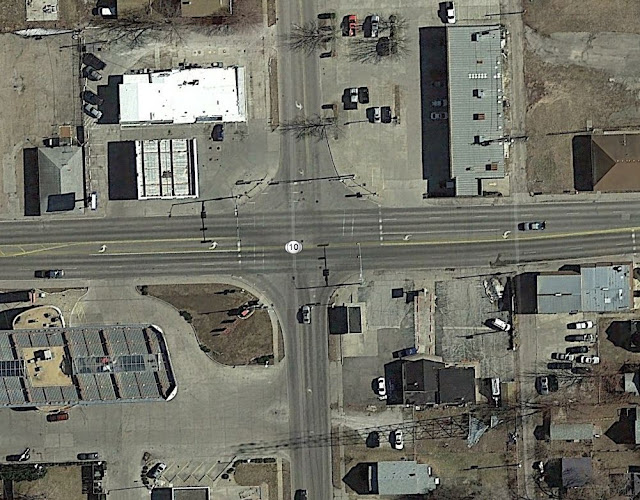 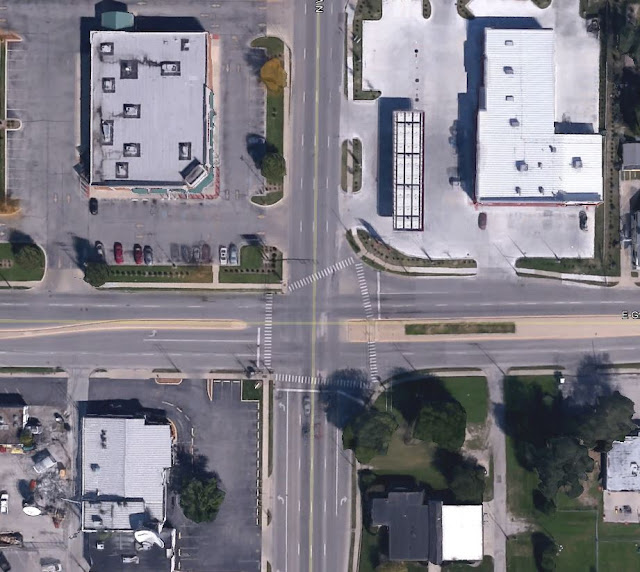 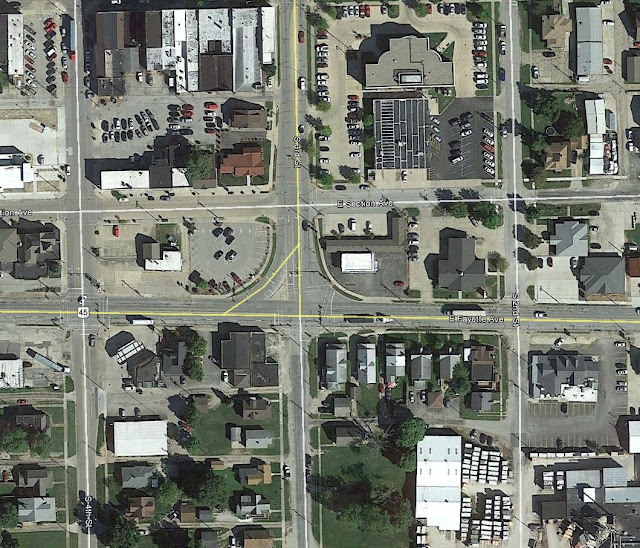 Meanwhile, let's look at that same WB-20 turning with one-way streets of the same width: 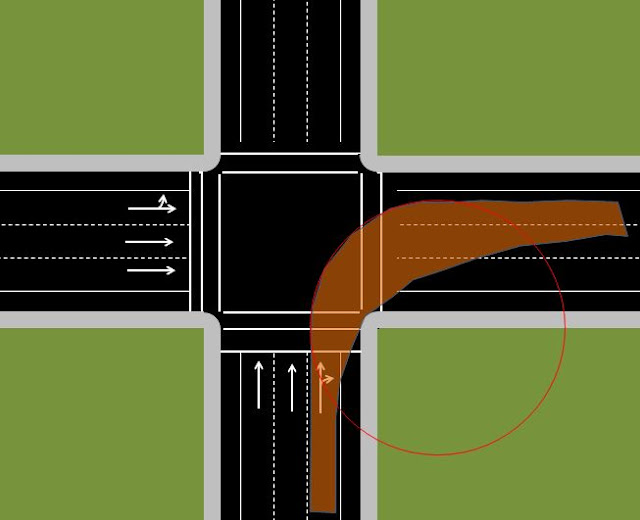 Here, there is no problem, even if the truck goes into the center or left lane, as they also go in the same direction, it can easily go there without any danger to anyone. So one-way streets are a way to allow big trucks into cities without transforming intersections into the abominations I just showed, while maintaining adequate pedestrian safety.

One-way streets are certainly not the best solution everywhere in a city. However, I do believe that it would be foolish to turn our back on them, they are a good solution to a particular problem, namely how to deal with long North American trucks and provide adequately fast streets for longer distances, both for cars and for buses. In fact, I think that this design in urban areas is far preferable to the huge 6-lane arterial which we unfortunately see too often in suburbs.

However, on commercial main streets where the focus should be on pedestrians and slow traffic, two-way streets are the better solution.
Posted by simval84 at 1:49 AM 15 comments: