The density of density: should density be uniform in cities or variable and concentrated?

In an earlier piece, I had explained why density was important, and even used trip survey data in Québec to plot the percentage of trips made by car versus neighborhood density, which  revealed a strong linear relationship between the two:
Density is of course measured by the population residing in a given area. However, this obscures a more complex reality of the distribution of density around the area. Two areas can have the same overall density, meaning the same population over the same area, but have wildly different patterns of density: one may be of uniform density over the entire area, with just one type of housing, the other may have great housing variety, with very dense apartment blocs in certain areas and large single-family houses in others.

A lot of urbanists in North America are very classical, craving order and uniformity, their models are European cities with buildings of the same height built close together. I think the country that exemplifies this best is actually the UK. From what I understand, the UK has a very centrally planned form of urban development, with cities drawing up plans and all developments requiring planning permissions on a case-by-case basis, making planners extremely important and resulting in very similar developments, with a marked preference for semi-detached housing and row houses. Indeed, nearly two thirds of the British population live in such housing, and there is very little multi-family development:
This mode of development is most flagrant in London where many subway stations are stuck in uniform neighborhoods of row houses without any dense node anywhere. On the other hand, we have the Japanese model which is much more chaotic and tolerant of varied housing types.

For example, here is Sudbury Town station, about 15 km west of London's CBD:

As you can see from these aerial shots, developments seem planned, with great uniformity in housing stock and seemingly no particularly dense housing, offices or retail near the station itself. In fact, if you were to take the northern exit of the station, here is what you would see:

Housing doesn't vary all that much, with row houses and semi-detached houses being ubiquitous, demonstrating well the bias of British planners towards this type of housing.


Now let's compare this with Tsutsujigaoka, a Tokyo train station 15 km out west of Tokyo station. It's not technically a subway station, but with trains coming in at headways of 5 minutes all day in both directions, it could as well be.


I hope you can see clearly how there is significant contrast between areas close to the station and those further out, with 10-story buildings right next to it and largely low-rise areas a bit further away. You can also see in the first pictures what seems to be a danchi (public housing) "village".
As to housing, here is some typology of it: 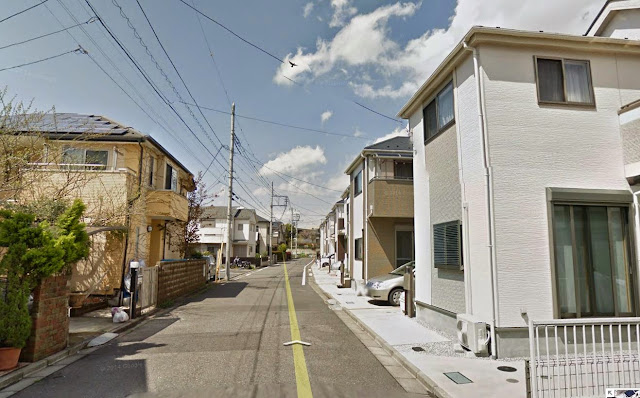 The British example is much less dense near the station, yet the row houses and semi-detached homes are a bit denser than the single-family areas of the Japanese example.

Now that I've illustrated the two models, of uniform density and concentrated density, let's do a thought experiment. Let's take two neighborhoods, with a major destination point at the center (retail, transit station, whatever), one of them has uniform density with 2- or 3-story buildings, with 10 000 people per square kilometer (much less in the commercial center) and another with tall condos/apartments in the center, surrounded by lower-density single-family areas. In effect, the density will vary between 30 000 and 6 000 people per square kilometer.

Both have the same population of about 19 000 people. If you calculated population over the area, you'd conclude that the uniformly dense neighborhood is actually denser, with 9 800 people per square kilometer versus 8 300 for the second. This is how density varies according to distance in the two neighborhoods: 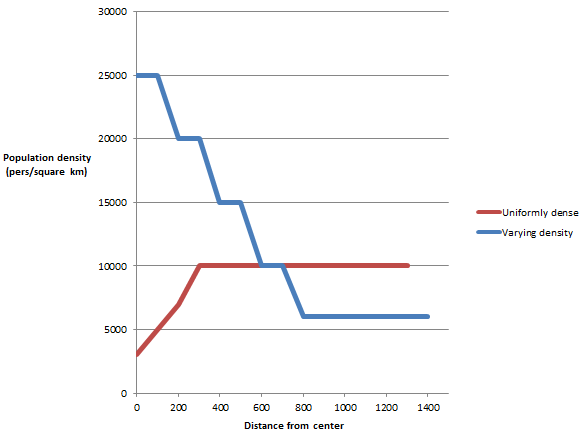 Now let's say I want to predict how likely people are to walk to the center of the neighborhood. Walking, as is instinctively evident, is very sensitive to distance. If you have to go next door, you are going to walk all the time (unless you live in a rural area where the next door is a couple of kilometers away). But as distance increases, the probability of walking decreases quickly. I have tried but failed to find data showcasing walking mode according to distance relevant to this thought experiment, so I just made this curve. NOTE: do not quote me on this curve, I literally pulled it out of my ass, just going by what I think should be true. 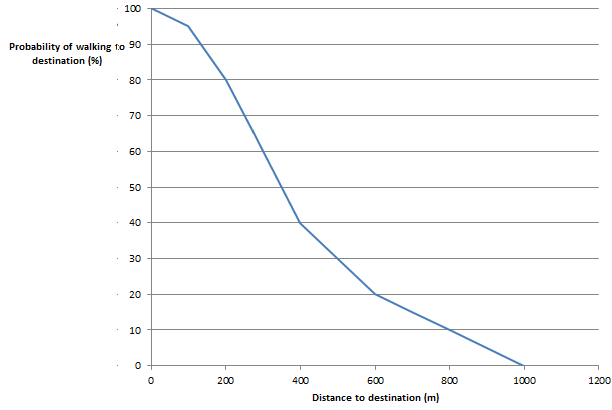 The reason is simple: though overall the second neighborhood is less dense, since it's much denser in the center, more people live really close to the central area than in the uniformly dense neighborhood, where density is even lower in the center than farther out because building height is the same everywhere but retail occupies a large part of the floor area in the center. And since the probability of walking is much higher if distance is smaller, then it's much better if you can get as many people to live as near to the concentration of destinations as possible.
Note also that the average density I calculated previously was the typical average density, dumbly dividing total population by total area. This is not very representative of the density the average person experiences. It is much better to calculate weighted density. This gives more weight to denser areas. Calculating is means dividing the area into smaller blocks, calculating the density of each of these blocks, multiplying the density by the population, adding all these totals together and dividing by the total number of people.

Visually, it means this: If I plot the density of neighborhoods over the cumulative population of the two neighborhoods: 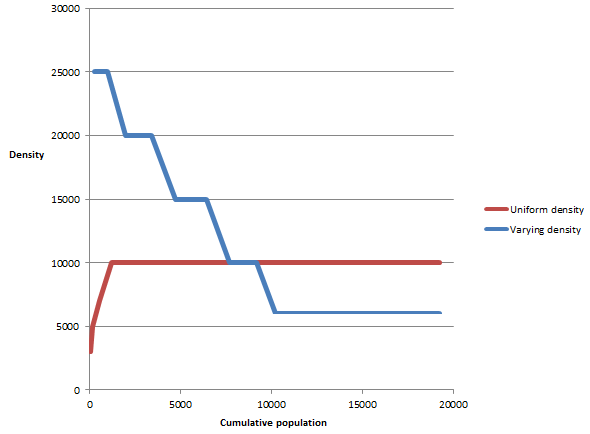 ...the weighted density is the value for which the areas between the curve and the value equal out top vs bottom (here, the light blue and dark blue areas both are of the same size). 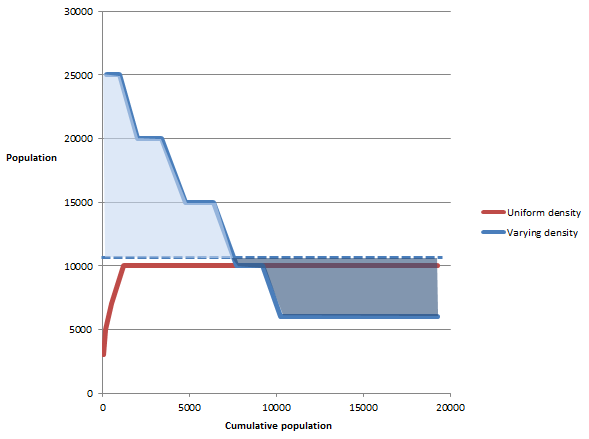 Doing it this way, the weighted density of the uniformly dense neighborhood is 9 900 per square kilometer, and 10 700 for the neighborhood of varying density. It reverses the previous averaging result, and is a better representation of the average density people live at.

Of course, this works if the higher density areas are near the commercial area/train station/other common destinations of trips. If density varies, but is less near the center and higher at the fringe (like, you know, Radisson station in Montréal), this is far worse than the uniform density case.

And indeed, this impact of density distribution seems to have measurable impacts. Whereas Tokyo's subway lines have respectively riderships of 12 and 8 million riders per km of track, London's Tube only has a ridership of 3 million riders per km of track per year. Another impact is that buses in Tokyo have very low ridership, but in London, since people live on average farther from subway stations due to the absence of high-density multi-family housing near most of them, buses are more used than subways, however bus trips are very short (1,6 mile on average in 2001 according to this data... sounds like a last mile problem).

As the most efficient mode of transport is walking and walking is very distance-sensitive, if we want to maximize the mode share of walking trips, then it is important to be ready to allow higher density developments near popular destinations: offices, groceries, transit stations, etc... The idea of uniform density, if it appeals to some's sense of aesthetics, is not as efficient and it doesn't respond to people's actual desires, with the supply of housing in highly desirable areas being artificially limited to be equal to the supply of housing in undesirable areas of the same size. More efforts should be put towards increasing density significantly near commercial/job/transit nodes rather than increasing the density of all neighborhoods at once.
Posted by simval84 at 1:53 AM