Urban growth boundaries are a favorite tool among many urbanists concerned with urban sprawl. After all, the basic definition of "sprawl" is that a city grows and occupies more and more space.
Some regulators looked at this phenomenon and thought that if the problem is that the city is growing, then that could be solved by a simple regulation: simply limit how far the city can grow.

This is also often called a "green belt", meaning an area of countryside imposed in regulations to prevent cities from sprawling into one another. The motives for such regulation are varied, most often, is it rooted in a desire to protect fertile lands from urbanization, as most major cities are located in fertile areas (an heritage from earlier cities). Agricultural land protection laws are also, in effect, a form of urban growth boundary.

The UK has allowed town and city planners to implement green belt legislation since the 1940s and the central government actually encourages cities to do just that. Ontario has also adopted more recently a green belt law to restrict how far cities can sprawl. Québec has had a law protecting agricultural lands since the 1970s, the Netherlands has had agricultural zoning since earlier than that.

This kind of regulation can have a secondary effect wherein each small city is given some place to sprawl, resulting in leapfrogging developments as the central city of a metropolitan area maxes its sprawl allowance and thus developments max out allowances of farther and farther cities. This is what happens in Montréal, which is especially visible on the northern side:

There is some leeway in this kind of regulation, some jurisdictions will gradually expand the boundary to allow for gradual sprawl, some will enforce the regulation and only rarely touch the boundary.

Criticism of the urban growth boundary

Some people. notably Demographia, a think tank headed by Wendell Cox, strongly oppose urban growth boundaries on the basis that it makes housing less affordable. Indeed, urban growth boundaries limit greenfield development, which means creating a shortage of land on which developments can occur. As the supply of land is constrained, the value of land is likely to increase significantly, even if zoning mandates low-density developments. This makes developments that require a lot of land, like single-family housing with large front and back yards, much more expensive. For people who believe that this lifestyle should be made affordable to all at any cost, ie promoters of sprawl, that's bad.

Of course, there is a way around the problem (if regulations allow it), and that is to build developments with much higher density, and that often means taller. That way, the value of the land can be diluted among many units and on a greater amount of floor area. However, there are two problems with this:
So in the end, though the shortage of land can be compensated by higher densities, the price of such housing is still going to be much higher per square foot than in low-density, unrestricted greenfield developments. This will result either in higher housing prices or in smaller living spaces.

Critics of green belts therefore argue that they just create more income for speculators and rentiers and make living less affordable. They then call instead for more sprawl in order to keep housing prices down.

In return, defenders of green belts often argue that though house prices may be higher, this reflects the greater value of location as higher-density developments will tend to be closer to services, transit and jobs. This also allows residents to opt out of having cars, saving a lot on transport and so the cost of living can even be lower than in sprawl, as housing costs are only part of the picture of cost of living, transport costs are another important part of it.

That counter-argument assumes that space-limited developments will always evolve a good urban design, which isn't correct. You can certainly have dense areas with bad urban planning that results in high transport needs despite higher densities. For example, LA's metropolitan area is edged in by the coast, mountains and deserts, a form of natural urban growth boundary that forced LA to be relatively dense, with LA's metro being denser than New York's metro area, yet any claim of LA being more walkable and less car-dependent than New York would be rightfully mocked.

It is important to point out that too often, pro-urbanism people make the huge mistake of both supporting urban growth boundaries AND "contextual" zoning that limits the density of built areas to what is currently there to avoid any redevelopment that would change an area's "character". These two policies combined create a perfect storm for sky-high housing costs as you forbid any new supply of housing, which in a situation with increasing population, and so demand for housing, is going to lead to prices spiraling upwards. It is clearly a choice: either one supports urban growth boundaries or one supports contextual zoning. You can't have both at the same time, not if you want housing to stay affordable.

What seems to be largely ignored by both sides is the issue of mobility. If people choose to live in suburbs rather than in the middle of nowhere, it's because they still want to access the jobs and services of the metropolitan area the suburb is part of. So suburbs are only possible if there exists a transport network that allows high enough travel speed to connect suburbs to the central city and other suburbs. In North America, this usually takes the form of highways..

Distance is measured in minutes, not miles. The faster people can travel, the vaster the area that is likely to be developed. Therefore, it is a delusion to believe that urban growth boundaries are only a result of regulation, they always exist either as a result of geographical features or as a result of the limitations of transport networks. That is why old medieval cities were always compact, because the transport speed was 5 km/h or so, ie walking speed, and this created a kind of limit to how much these cities could sprawl before the periphery was too far to be connected with the economic whole of the city. So sprawl is always limited in some way, it is not the result of laissez-faire, it is created by investments in transport infrastructure.

One consequence of this is that it must be understood that high-speed transport networks inherently subsidize sprawl, they make it possible for sprawl to spread so far, so these cheap lots available in sprawl actually bear a high cost in terms of transport infrastructure spending that the buyers of these lots rarely have to pay. It is very rare in North America that the people who use the infrastructure are asked to pay for it directly through fees. Largely, highways are funded through gas taxes and other taxes that are levied on everyone regardless of whether they use the highways or not. This forms a kind of subsidy to suburban housing prices and to suburban cost of living.

So sprawl does make housing cheaper, but it's largely a result of distortion of price signals as much of the infrastructure that supports it is financially supported by everyone, and not just those that use it most.

So in the end, urban growth boundaries are largely unnecessary, the best way to control sprawl is through the collective choices we make on the kind of transport infrastructure that will be built and how it will be funded.

I must point out the inherent stupidity of many North American urban centers, the schizophrenic nature of public policy on urban developments.

On one hand, you have DOTs and Transport Ministries that seek to enable fast, uncongested travel in metropolitan areas. They will build new roads and widen existing ones to make sure that people can keep traveling around quickly, increasing mobility. They will do so with tax money and not with fees, because the unspoken idea in North America is that people are entitled to highways, to fast roads to get them where they want to go, and all of that without having to pay for it directly. Try denying someone highways or asking highways to be tolled and they will cry out that they are being treated as "second class citizens" (I know, one of my old friends used that line on me when I told him I opposed highway construction to the suburb he recently moved to).

On the other, you have State/provincial governments or city governments adopting green belt regulations to restrict sprawl and prevent it.

Do you see the problem? We are creating sprawl with our transport policy and investments, with public money, but then we turn around and say "sprawl is bad" and try to limit it. We are doing one thing and its opposite, spending a lot of money on both, not realizing that we are largely fighting against ourselves and wasting billions of dollars doing it! Using regulation to fight something that we created by other regulations and government intervention. 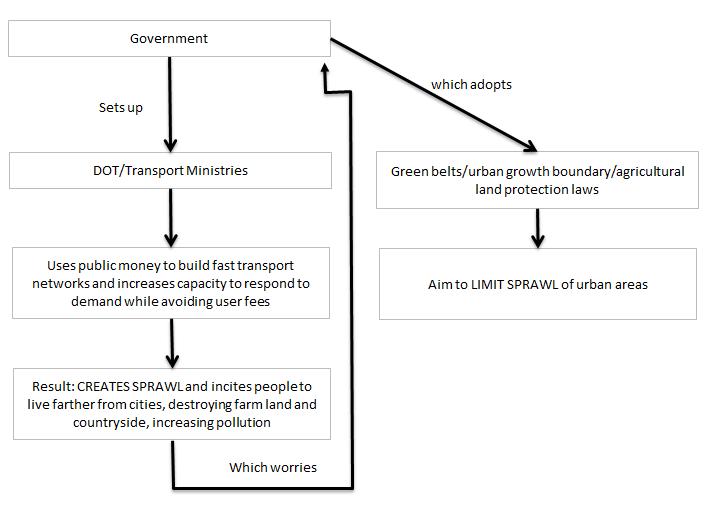 So urban growth boundaries are a bad reaction to a problem that we create with our choices of transport policy and investments. We don't need them, what we need is to stop treating access to high-speed, toll-free roads as a human right and stop spending so much tax money on it. Make highway users bear the cost of highway construction and maintenance through tolls, impose congestion charges on vehicles accessing congested areas and do not build roads if they wouldn't be profitable, and you won't need urban growth boundaries as it will create incentives to avoid traveling high distances regularly. Of course, we also need to accept the fact that infill developments need to happen and that areas need to be able to change to accommodate higher demand.

Ultimately, yes, the result is higher housing costs per square foot. However, the cheap housing prices of sprawl is largely illusory, the result of hidden costs through higher transport costs for residents and higher infrastructure costs for governments. People should be free to live in the middle of nowhere if they want, to benefit from low land costs to have a big house, I am fine with that... as long as they don't ask the rest of society to pick up the tab and build the infrastructure required to allow them to live in that way without all the inconveniences of distance.
Posted by simval84 at 9:13 PM