Where should bikes go?

First of all, I've been on a trip to Japan for the past two weeks, expect even more observations on Japan than usual.

Now, let's talk about bikes. A beloved mode of transport for a lot of urbanists, as they constitute a much needed middle ground between pedestrians and cars. Like pedestrians, cyclists require no fuel other than muscle power, have no emissions and require very little infrastructure. They are however quite a bit faster, 2 to 4 times faster than a walk, depending on circumstances, making them sometimes nearly as fast as cars on certain city streets, and often faster than buses. They share some of the disadvantages of cars, but in more moderate forms, they do take quite a bit more space than pedestrians, especially in movement, and they need parking of some kind at their destination, just like cars.

Now, the average urban street in North America has two separate parts: the street, intended for motorized vehicles, and the sidewalk, intended for pedestrians. Where do cyclists fit in all this? There are three schools of thought I know of.

Vehicular cycling: the bike as a car

Vehicular cycling is basically exactly what it says on the box. It is about treating cyclists like another vehicle on the street, albeit a slow vehicle (like those tractors in rural areas) which are demanded to stick to the shoulder. So a cyclist's place is among the cars on the street, sharing the same surface. This is essentially what the laws say about cyclists, who are excluded from using sidewalks and told to stay on the street, at the extremity of the rightmost moving lane. Cyclists must be ready to impose their presence on cars, notably by moving to the center of moving lanes if needed for safety and by doing left turns in intersections.

The logic for this is that cyclists benefit from the same smooth pavement as cars and streets represent by far the greatest amount of the public right-of-way currently available. Vehicular cycling also maximizes speed, by acting like cars, cyclists end up benefiting from the smooth movements they are allowed on the street, for instance left turns instead of doing two street crossings.

Vehicular cycling may be safe for cyclists who are willing to stare down cars and who are able to maintain a fast speed, but it is well-known that many cyclists shirk away from it. Going in the path of a car to prevent it from passing you may be logical, but it assumes the driver will act responsibly, and if he doesn't, there is no denying the unique vulnerability of cyclists on the street, surrounded by moving tons of steel. Safety on streets also tend to depend on the speed differential between users, the greater it is, the more likely accidents will occur. So, to be safe, the ideal would be for cyclists and cars to go at the same speed, of course, this is ludicrous in most instances, but professional and sporting cyclists can achieve something close to it on urban streets.

So risk-adverse cyclists and cyclists who can't maintain high speeds tend to opt out of biking when vehicular cycling is the norm.

In terms of infrastructure, vehicular cycling requires little to none. All it requires is that lanes be made wide enough to allow cars to pass cyclists safely or to have shoulders, even on urban streets without parking. Since cars can be 2,1 meter wide (7 feet), assuming a safe passing margin of 1 meter (3 feet, more or less, which is regulatory in some places) and a cyclist's width of about 0,6 meter (2 feet), that means that the rightmost lane ought to be at least 3,7 meter wide (12 feet)... Which is a standard highway lane, exactly the kind of wide lanes we do not want in urban areas as they incite speeding, and that's assuming both cyclist and car are as far as possible from one another, with no margin between the lane's ends and the car and cyclist. If you consider trucks and buses, which can be 2,5 meter wide (a bit over 8 feet), you're up to 4,1 meters (nearly 14 feet). That's even worse.

You can provide a shoulder of 2 meters instead (a bit under 7 feet), but such shoulders do nothing to stop the problems of large lanes. They also incite cars to use them as parking, and once a car is parked in the shoulder, you have the same space problem as before, if not worse because then cyclists are cycling next to a steel wall.

So vehicular cycling actually requires wide lanes, which goes in contradiction to everything else we want in cities. They make crossing streets longer for pedestrians, incite speeding, reduce density, create large gaps between buildings, etc...

Bike segregation: creating a third part of the street

This is the approach most popular in urbanist circles in Europe and North America from what I see. The idea is that cyclists are not cars for obvious reasons: they are much more vulnerable and cannot go as fast as cars, so they need their own path separate from other users. This path should ideally be physically separated, but not necessarily, simple marking can suffice, especially on streets with less traffic.


By providing cyclists with space that is reserved to them, the goal is not only to allow them to travel around more safely by keeping cars away from them, but also to encourage more people to bike by providing a feeling of safety, a message that they belong there. All of this while maintaining a high speed. In fact, to provide high-speed, high-capacity bike links, segregated facilities are best.

The main issues with separated facilities is that they require quite a bit of space, especially if they are to be done well, and doing them well seems to be very hard to do. For example, take a look at this bike lane, from Montréal: 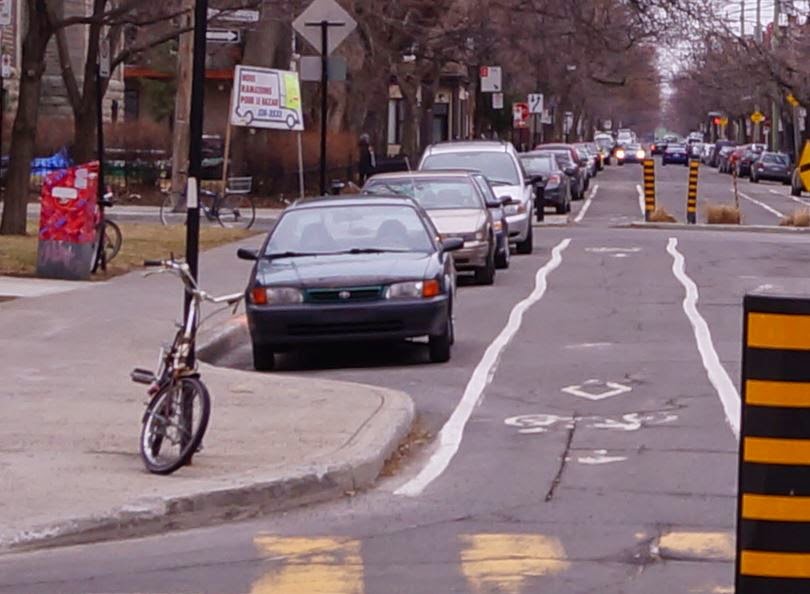 Not only is this quite wide, but this doesn't eliminate all the problems. In the first case, cars that are parking will block the bike lane, in the second, bikes are only poorly visible from the street, which can cause problem at intersections.

So though separated facilities can be great, they can also create certain problems and require a lot of space to do well. If a street is wide enough to accommodate physically segregated bike lanes in a safe manner, that's good, otherwise, it's not always possible to get a great bike lane. This results in many cities, even pro-cycling ones like Vancouver and Montréal, to have big gaps in the bike lane network, with one kilometer and more between bike lanes and many commercial arterials lacking facilities as the streets are considered too narrow and/or the parking on them is judged as essential to the vitality of the street.

The third approach is one that considers cyclists as pedestrians rather than as cars, telling them to ride on the sidewalk. This is quite rare in North America, but it is the rule, in practice if not under the law, in Japan.
Of course, the sidewalk as conceived in North America, made up of narrow segmented concrete blocks that are often not level with each other and with frequent curb cuts, is not appropriate at all for biking on. The cracks between the concrete blocks will provide quite a rough ride to any cyclist riding on them, the frequent ups and downs of curb cuts will challenge their ability to maintain a straight path and the narrowness of the sidewalk means there is little margin for error and it is quite impossible for two cyclists to pass each other safely.

On the other hand, Japan has very different sidewalks. First, in most residential areas, there is just no sidewalk, every road user is equal. But on large arterial roads, there are sidewalks, and here is what they look like:


First, sidewalks in Japan eschew the whole concrete block thing, they go for two kinds: some sort of very level cobblestone and asphalt. Both of which offer a smooth riding surface to cyclists. Also, they don't depend too much on curb height to protect pedestrians from cars, they use trees, fences and the like, even in the absence of such features, the sidewalk is often almost the same level as the street. Sometimes, the curb is very narrow, with sidewalk and street being at the same level, separated by an elevated curb a few inches wide. This means that curb cut are much less disturbing to people walking or biking on the sidewalk.

Another important thing to note: the sidewalks are much, much wider, 2,5 to 3 meters on average on arterials (8 to 10 feet). I think this may be due to the assumption that cyclists will use these, so the sidewalks have to be made much wider in order to allow two cyclists to pass each other.

(BTW, the yellow lines in the examples posted above are not separations between cyclists and pedestrians, but guide lines for the blind.)

Remember in the case of vehicular cycling that this justified making wider lanes for cars and/or adding shoulders on urban streets devoid of the need for them otherwise? This is the same thing, the presence of cyclists forces planners to arrange for wider sidewalks to be able to have cyclists passing pedestrians or other cyclists.

The result of this is not only that cyclists are protected from cars by benefiting from segregated paths, but as these paths are the sidewalks, it means the safe cycling network is extremely complete in Japan, as every street with sidewalks tend to allow bikes on sidewalks.

This isn't perfect though, there is some degree of friction between cyclists and pedestrians, but this results mainly in lower speeds for cyclists who bike at 10-15 km/h from what I've seen rather than 15-25 km/h in North America. The reason is that cyclists are just as vulnerable in a crash as pedestrians, if not more so, so they tend to be more careful. It seems to work well at inciting people to bike though:


After getting rid of my prejudice against biking on sidewalks, I must admit liking the simplicity of the Japanese system, in which cyclists add space to sidewalks rather than roads. This contributes to wide, comfortable sidewalks where curb ramps aren't felt much, if at all. It does mean that biking is slower and every sidewalk has less capacity than segregated bike paths or lanes, yet the high number of streets with sidewalks mean that high capacity isn't required, cyclists will distribute themselves amongst many possible routes and avoid congestion. However, this would require a complete redesign of sidewalks in North America to apply, biking on sidewalks as it is is not recommended at all.

If speed and high capacity are sought, segregated bike lanes are still unbeatable. However, vehicular cycling, though it may work well for individuals, should not be where we place our bets on how to develop cycling.
Posted by simval84 at 12:35 AM