On my previous article, Jeffrey Jakucyk made some comments about Japan and Danish/Dutch approaches to biking in cities that have led me to write this follow-up on what biking in Japan looks like... as seen from a tourist's eyes. For residents and Japanese nationals 間違いしたら、教えてください。

First of all, he noted I didn't mention the sophisticated Dutch and Danish approach to providing complete cycle tracks in their cities, a glaring omission since they have the most complete and best system of segregated cycling facilities in the world. That is a correct criticism. To be honest, I mainly wanted to introduce the third path of bicycle integration, the one the Japanese seem to prefer. In most circles, the debate is between the vehicular cycling and segregated facilities sides. The idea of incorporating bicycles on sidewalks is very rarely considered or mentioned in urbanist debates, from what I have seen at least, and many others know and have described Dutch and Danish practices about cycling much better than I do and could.

So I admit omitting them when they deserve mention, but do not feel all that apt at talking at length about them.

I suspect that the walkability of Japan coupled with its crushingly overcrowded train systems actually hurts their bike mode share. Bikes don't lend themselves well to busy pedestrian-dominated streets, and if it's easy enough to walk then why bother? In many European countries they go to great lengths to provide bike parking and to allow room for bikes on trains. That's much more difficult in a place like Japan where there's so much less room.

He mentioned bike parking facilities, which I've actually noted in my recent trip to Japan, so I'll describe my observations, but first, a bit about the bikes themselves.

Mamachari is the term used by the Japanese to describe utility bikes associated with mothers, but that we might extend to all common Japanese city bikes. Mamachari is a contraction of "mama" and "charinko", an informal name for bicycles, referring to the sound of the bell used to warn pedestrians you're coming up behind them (CHA-riiiin). The basic principle is that the bike is cheap, often made from steel or aluminum frames, with 1- to 7-speeds, and pretty crappy brakes, but which has a lot of built-in accessories and a comfortable riding position. A bike coming from a conception of the bike as an utility vehicle rather than merely a sport.

Here is what a regular Japanese city bike looks like, a model I've rented for 500 yen for a day in Sapporo. Click on pictures for bigger versions of them. 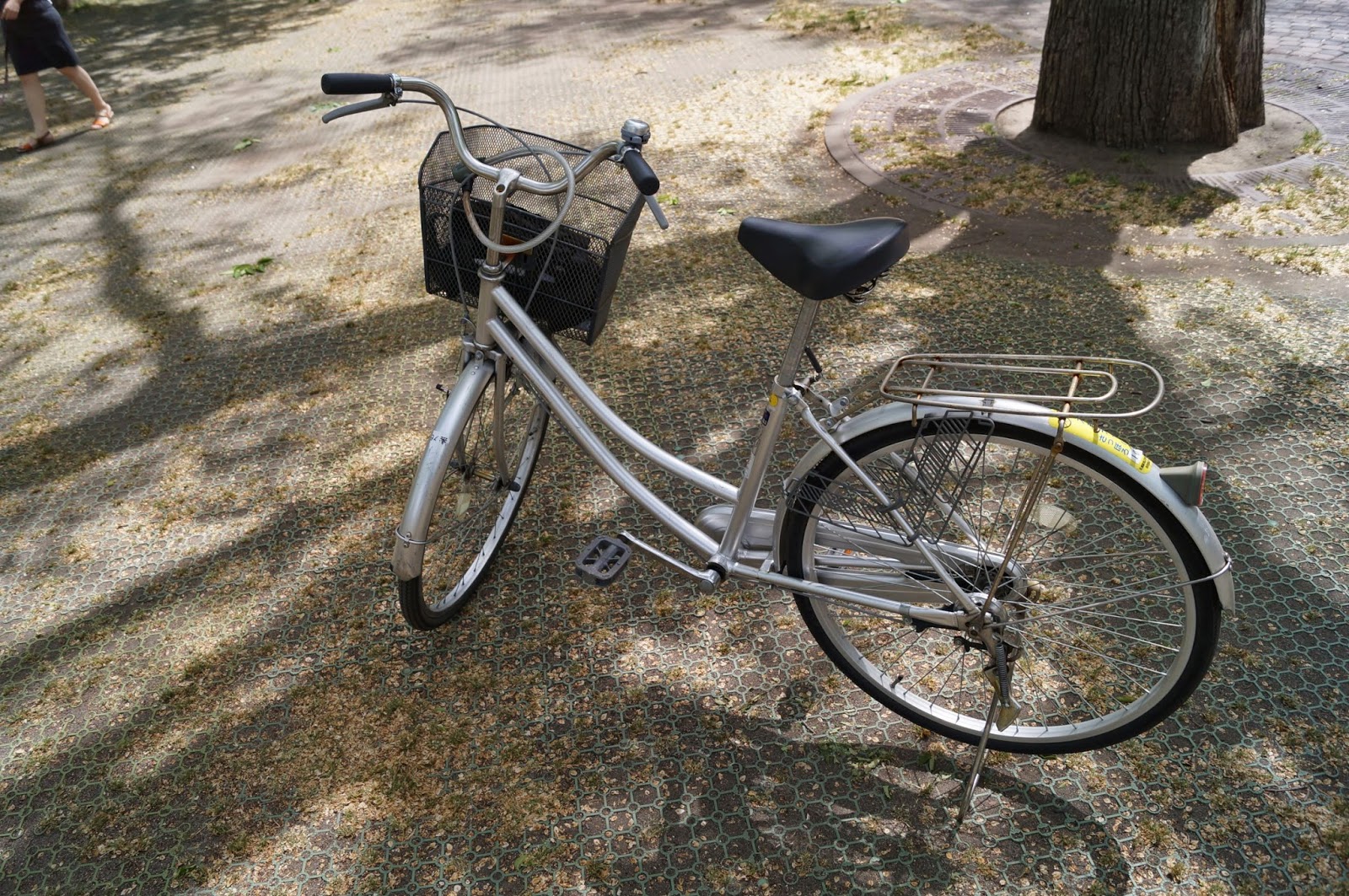 Note the step-through frame, made to facilitate getting on and off the bike, especially for women with dresses. These are often considered only good for women's bikes in North America, but men and women have them in Japan. I personally don't see why we insist on having high straight bars for men's bikes here, it seems stupid to me, it may be supposedly to offer a stronger frame, but doubt it makes much difference for city bikes. Note also the handles, built high and curved towards the rider to offer a comfortable straight position, the seat is padded and has springs to smooth out the ride. There is a rear rack behind and a stand. 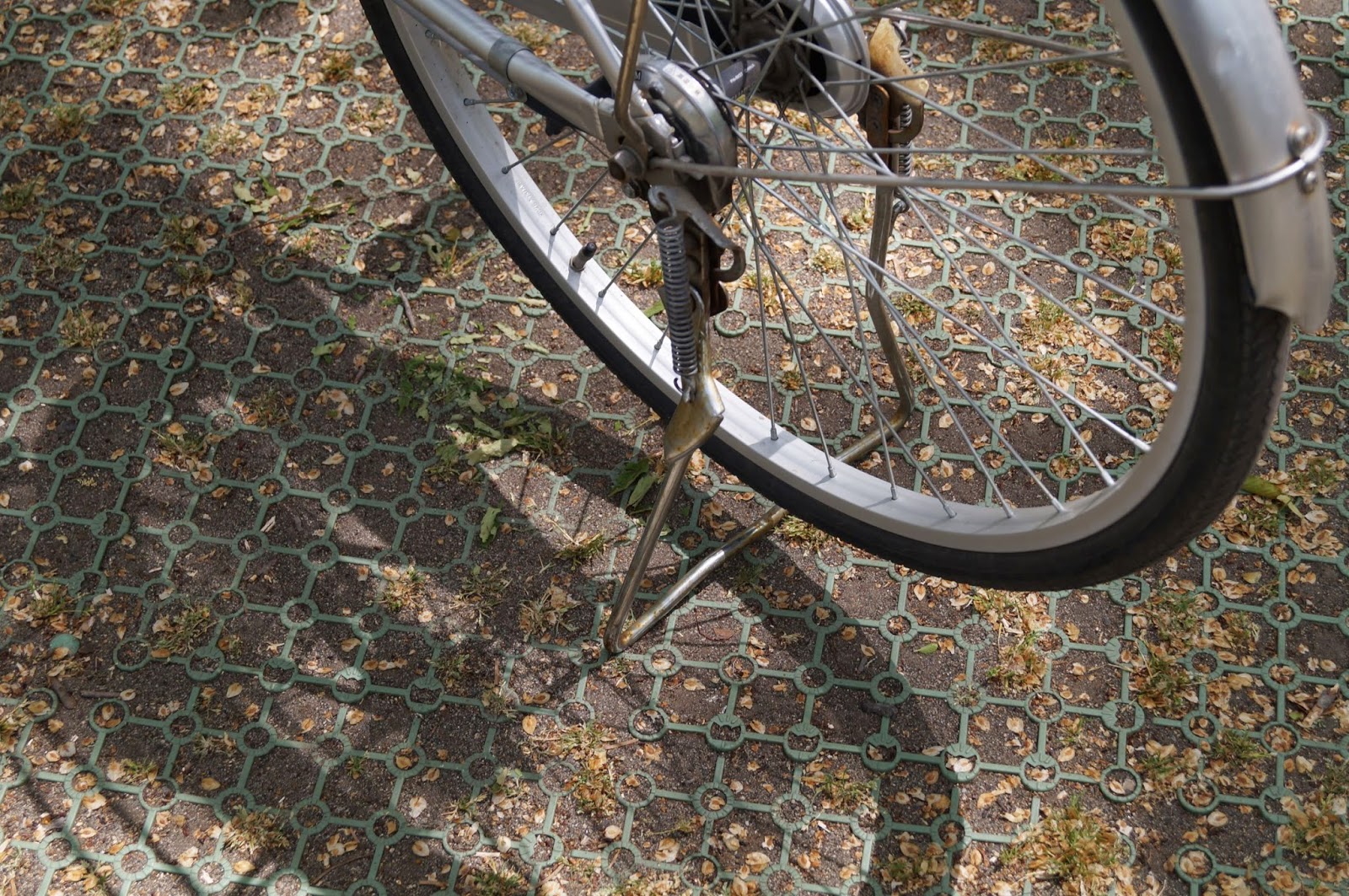 Just a quick look at the stand, which is a common stand on Japanese bikes but one I haven't seen much in North America. Looks quite sturdy to me, but you need to pick up your bike to put it in place. 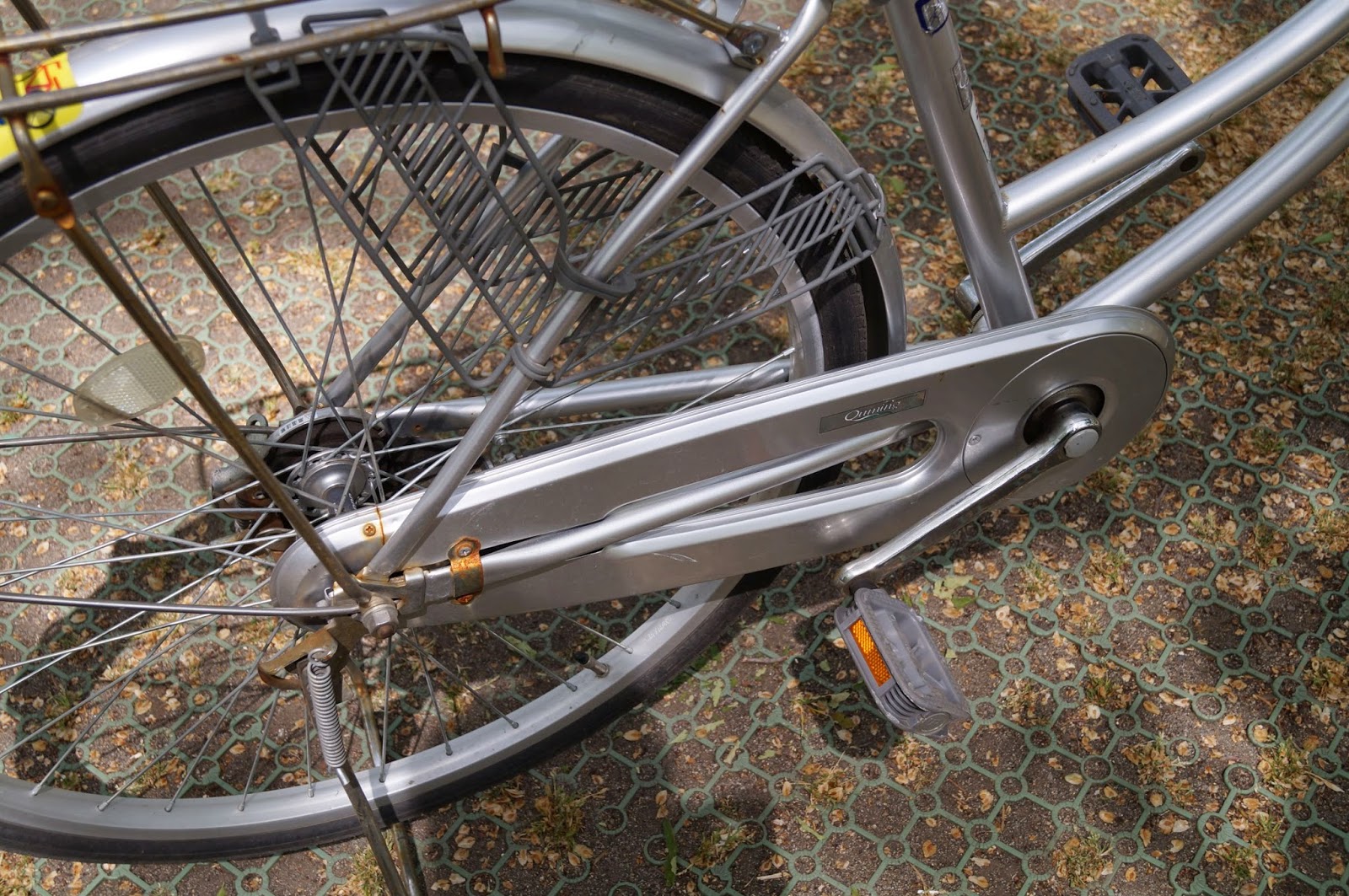 Another important point: a chain guard to prevent clothes from getting chain grease on them, which is essential to allow bikes to be easily used by people going to work in regular attire without worrying about getting hard to remove stains on their clothes, including their business suits. Because, yes, business men and men in formal work suits do ride bikes. In Japan, people would likely look at you bizarrely if you wore lycra on a mamachari, just like we tend to look bizarrely at people in suits riding bikes here. Note also the mud guard on the wheel, also on the front one, to limit mud and/or water being thrown on the rider. 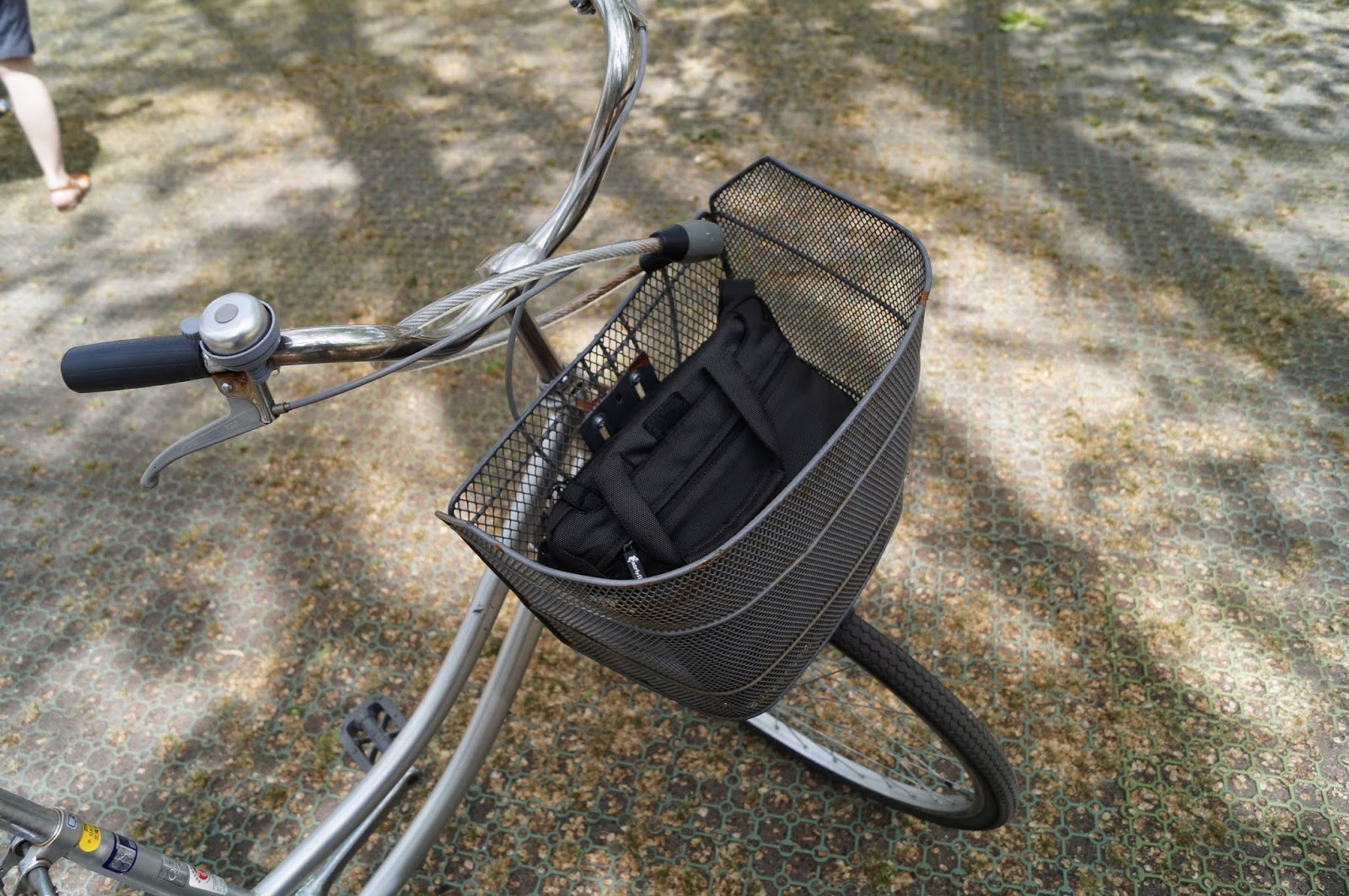 A basket in front, a bell to warn pedestrians you're coming up behind and no speed selector. This particular bike had only one speed, though some similar bikes have a few speeds, like 3-, 5- and 7-speed transmissions. Rarely do they have more. These are intended to be left out in the rain, you don't want anything too complex that might give you a hard time, the simpler, the better. When you are riding on sidewalks, you can't go too fast anyway as you are around pedestrians, so that doesn't change things much. 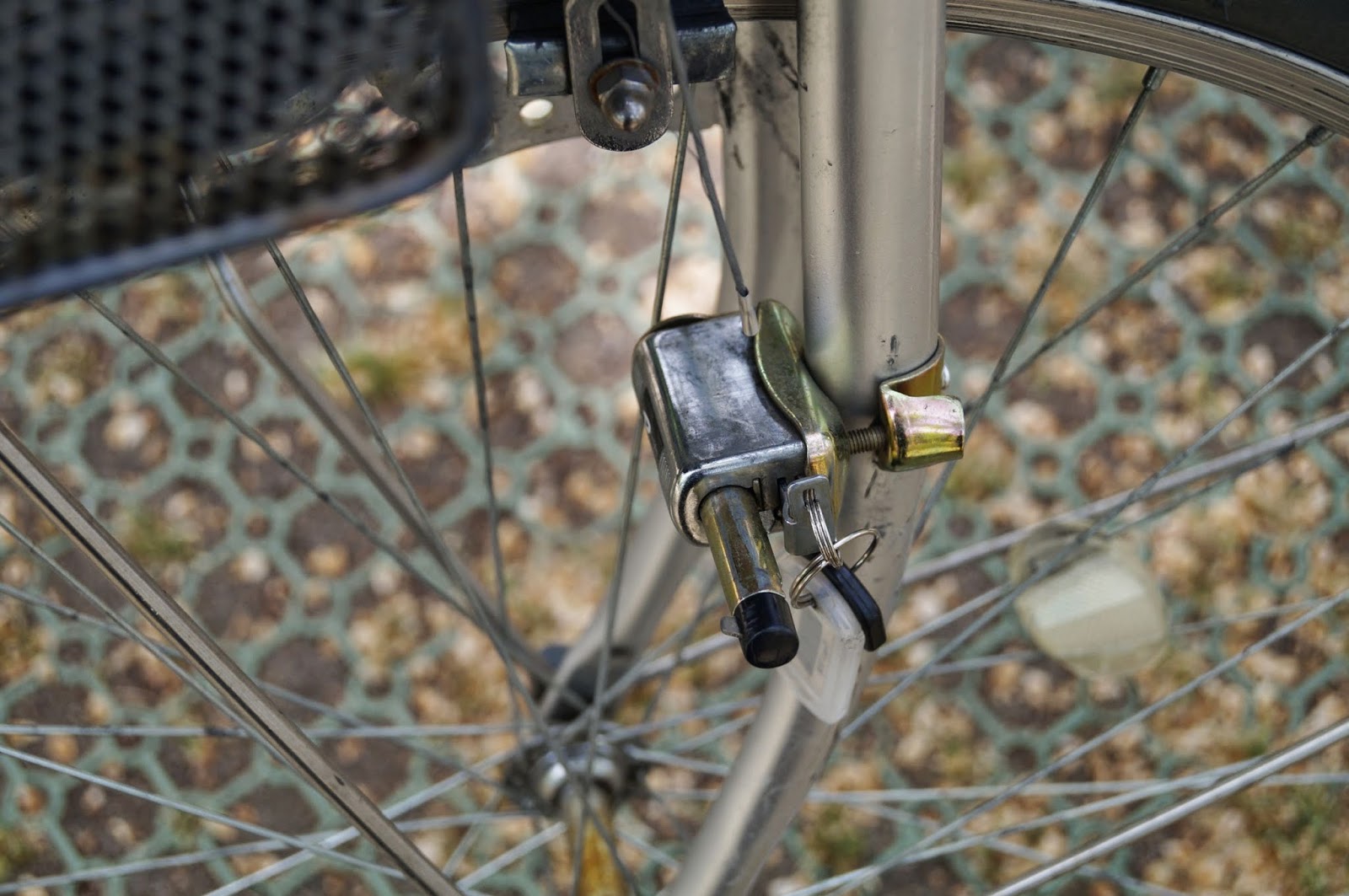 This is one type of wheel lock that Japanese bikes use. This used some kind of a bolt that would lock into position to stop the wheel from turning if the key wasn't inserted into the lock. It doesn't prevent someone picking up a bike and going away with it, but it does prevent people from getting on the bike and riding away on it.

However, the most common type of wheel lock was a circular one bolted or soldered on the frame, like these ones: 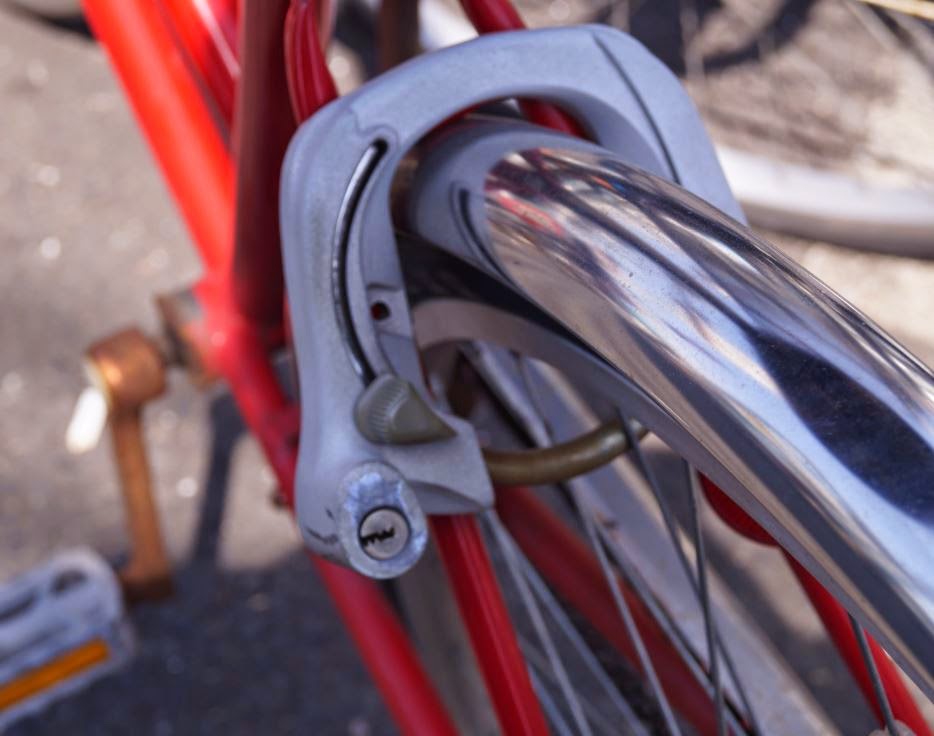 The Japanese rarely lock their bikes to anything, they use wheel locks exclusively most of the time. Supporting this is that:

1- Every bike in Japan MUST be registered with the police. Store owners will help you do it when you buy a new one, and you must fill in papers to transfer property of the bike on the registry if you sell your bike to someone else or if you buy an used bike.

2- These bikes are mostly viewed as disposable. They are sold at affordable prices and come fully-equipped, so they don't need to be modified and customized to be used.
There are also foldable bikes, but have no pictures of them, and they are a minority of bikes. Battery-assisted bikes on the other hand are more and more frequent.

As mentioned in passing, the Japanese largely do not use racks to park their bikes. They park them with wheel locks only most of the time, on their stands. They generally leave them on sidewalks or on the side of the street. 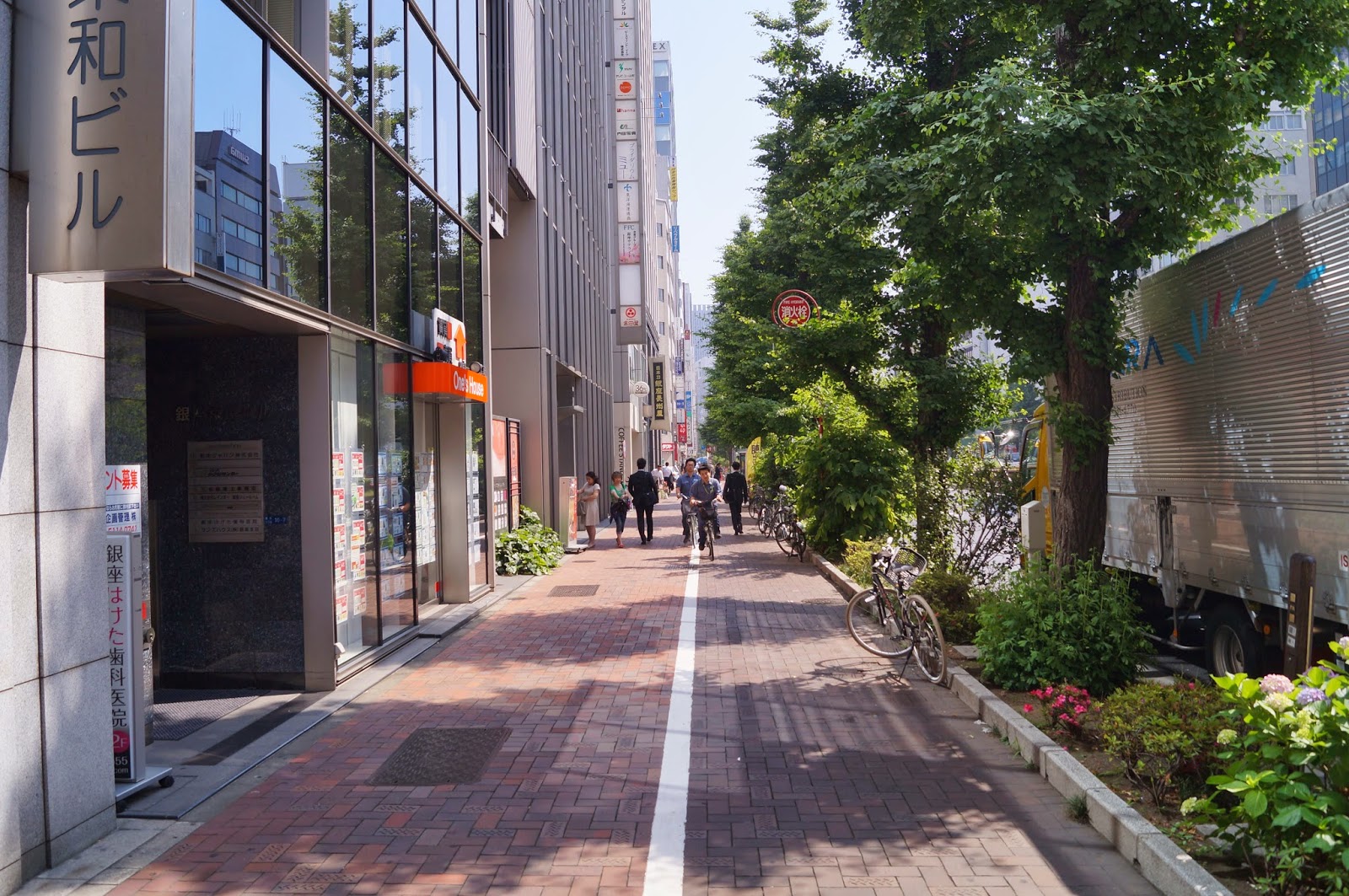 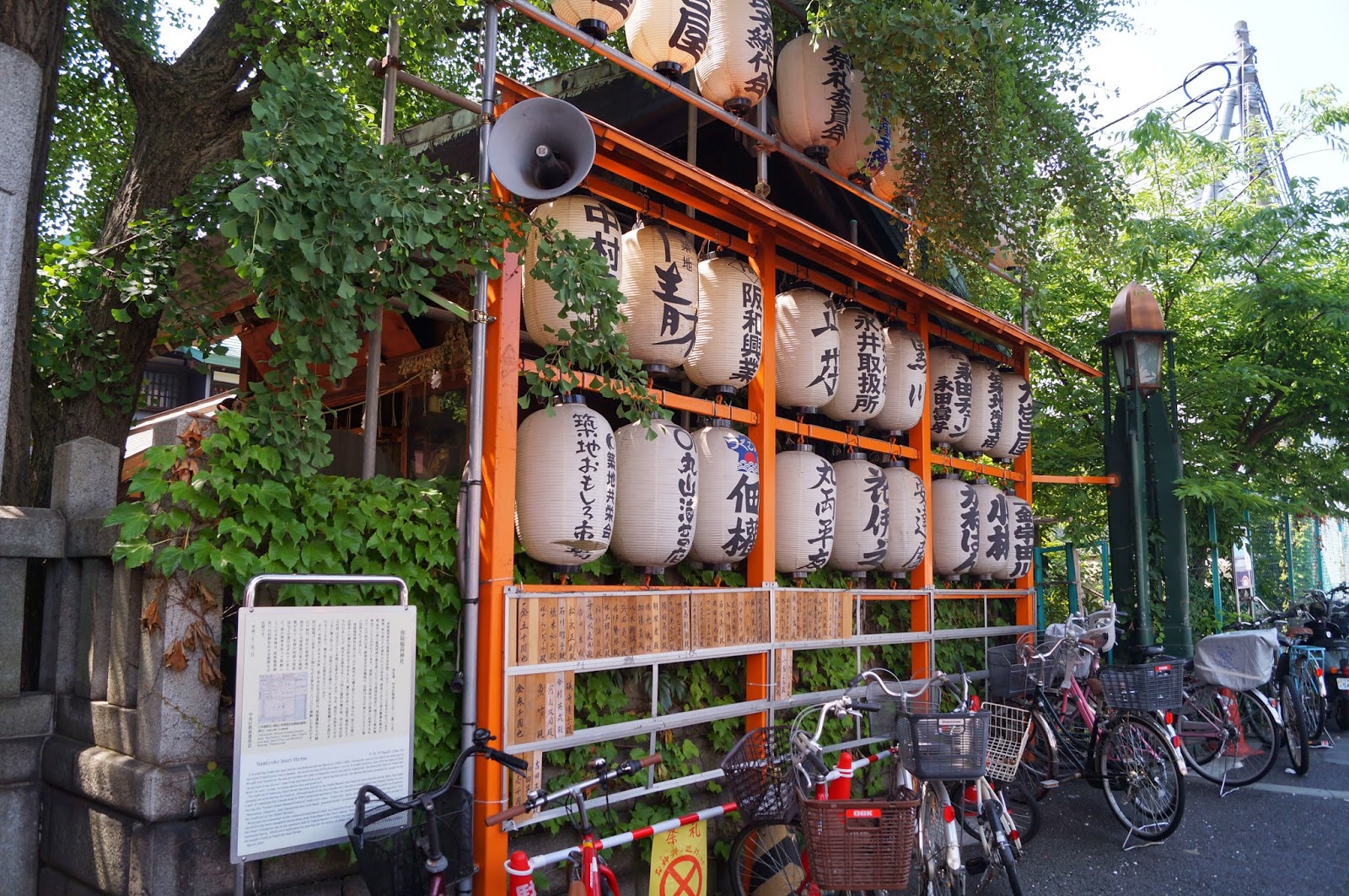 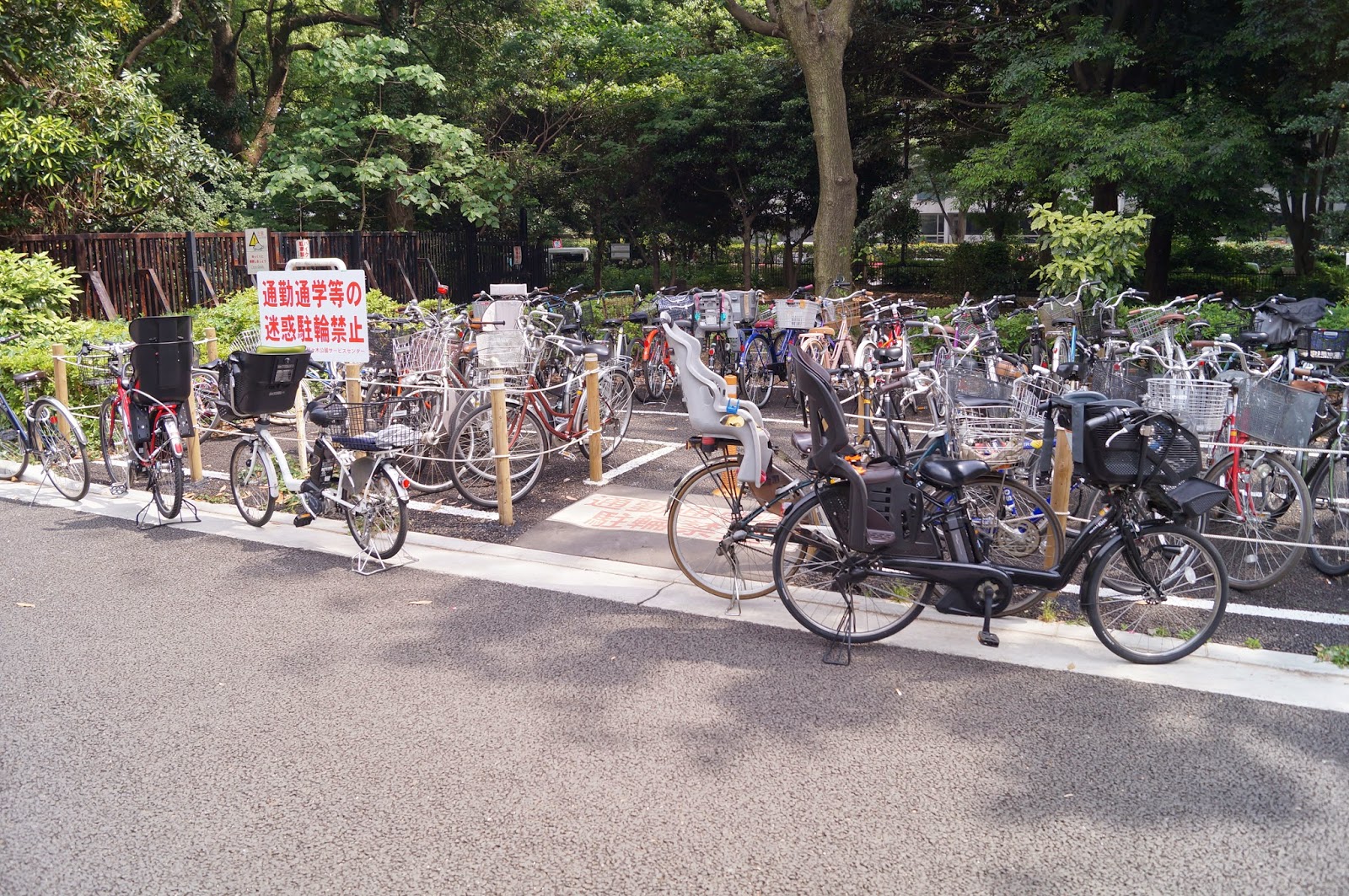 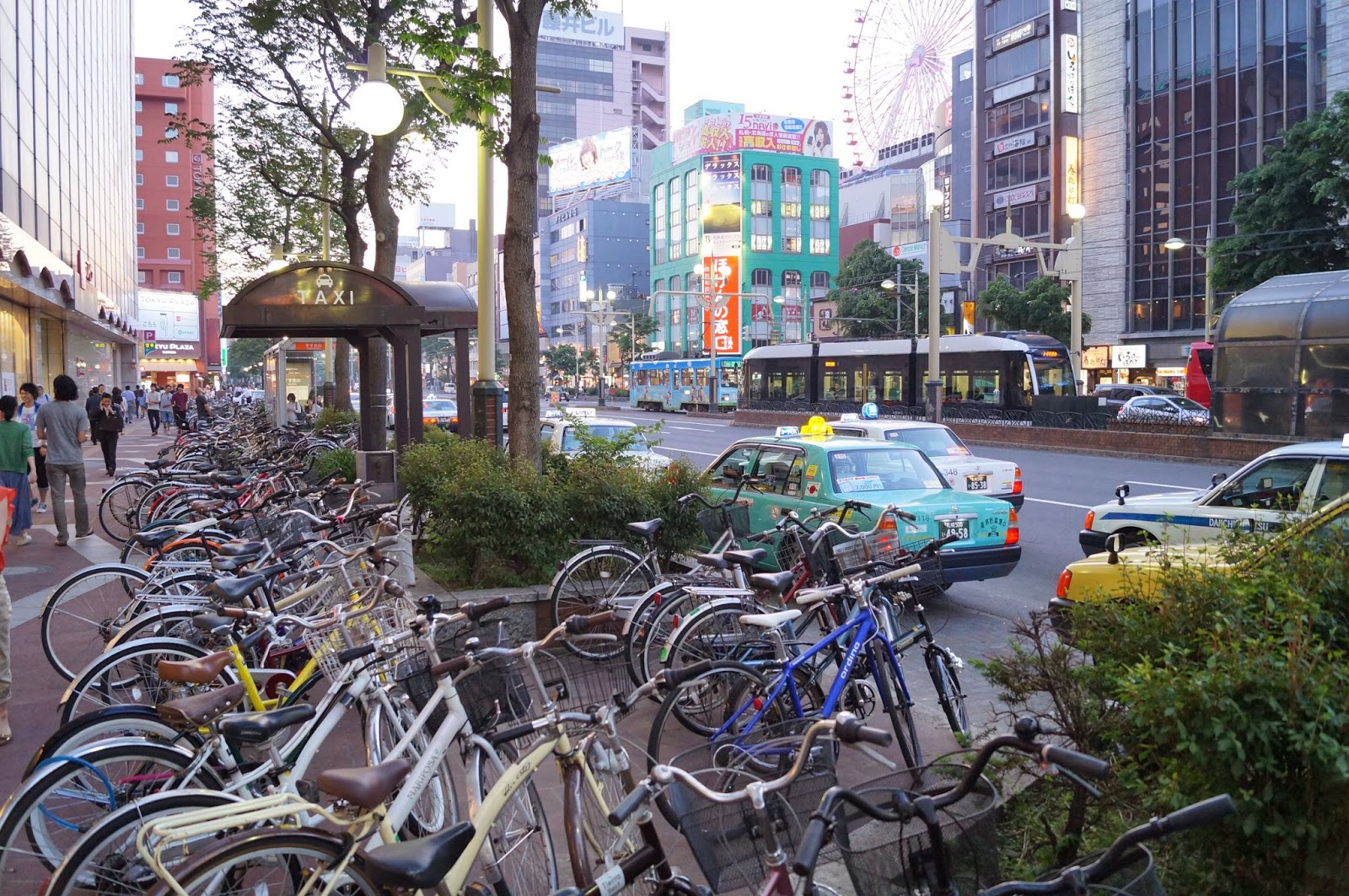 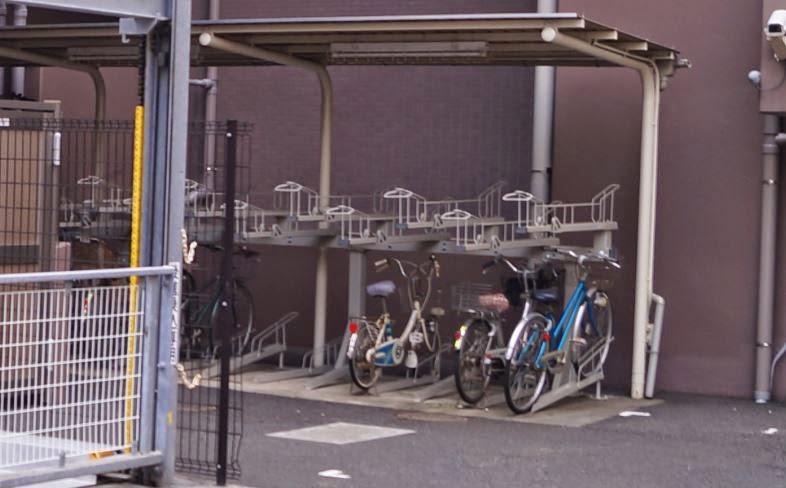 That being said, the haphazardly parked bikes in Japan have become a bit of an annoyance, so there are attempts at providing spaces where bikes can be parked. Sometimes, it's just an area where it's indicated that bike parking is provided, but they have started providing certain bike parking facilities. 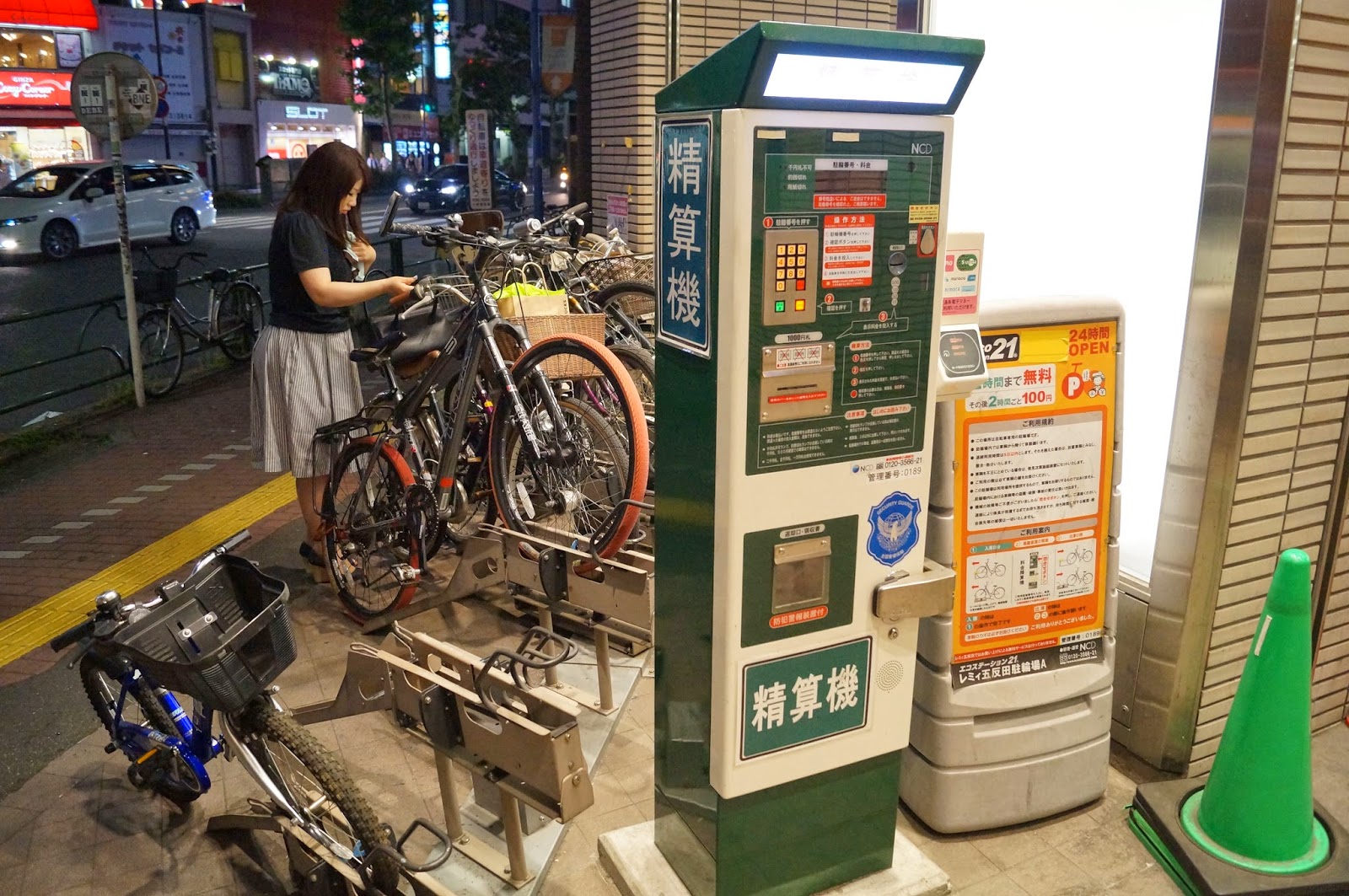 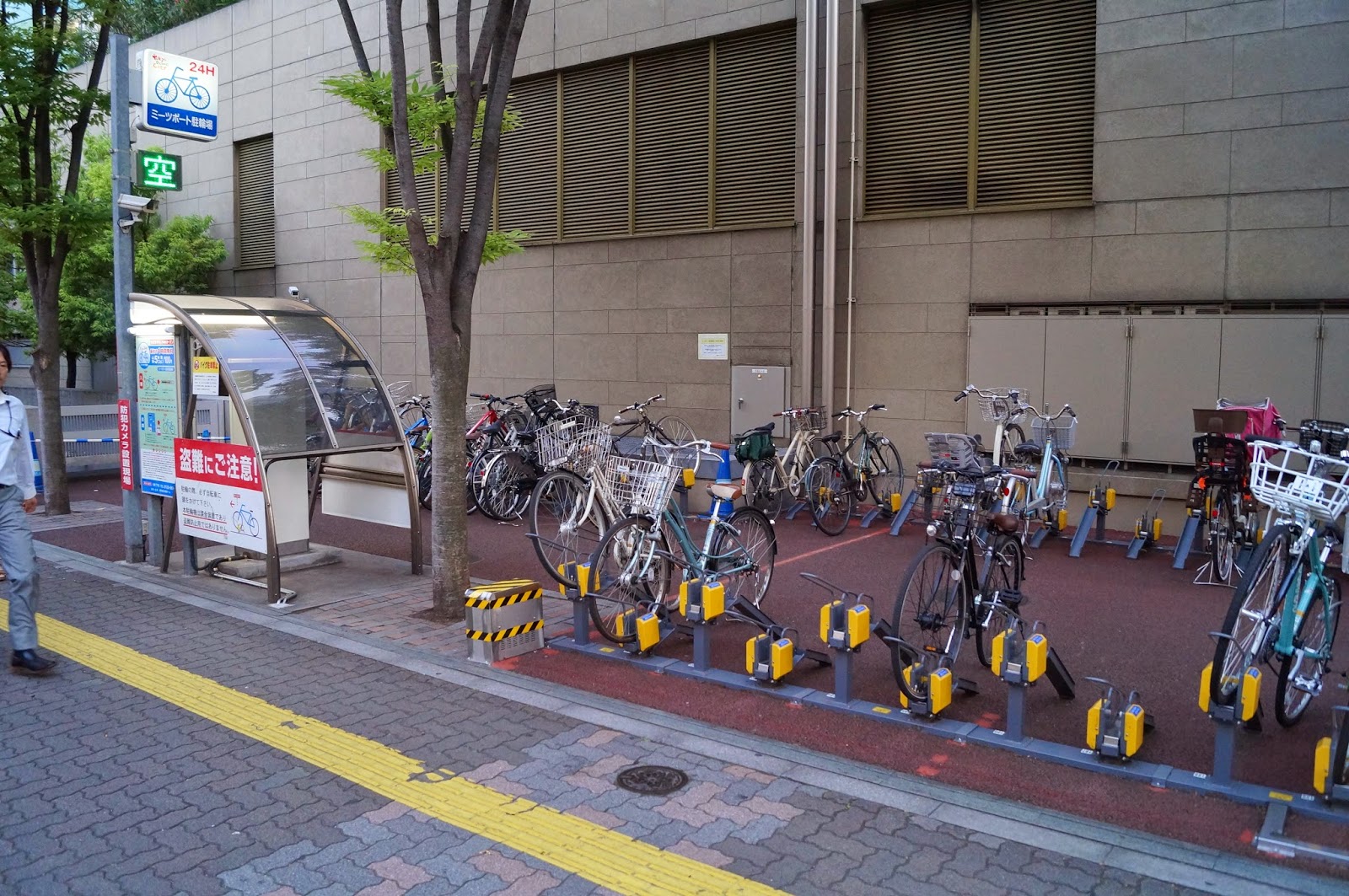 The first one is in front of a supermarket in Tokyo, there are secure, self-locking bike racks there, that are free for up to 2 hours, then costing 100 yen (1$) for every 2 hours above that. The second one is also in Tokyo, has surveillance cameras and costs 100 yen (1$) per 5 hours, I think.

I've also seen sometimes outright massive parking facilities around train stations... park-and-rides that even urbanists can love. Like this one in Sapporo, which also included a section for rental bikes: 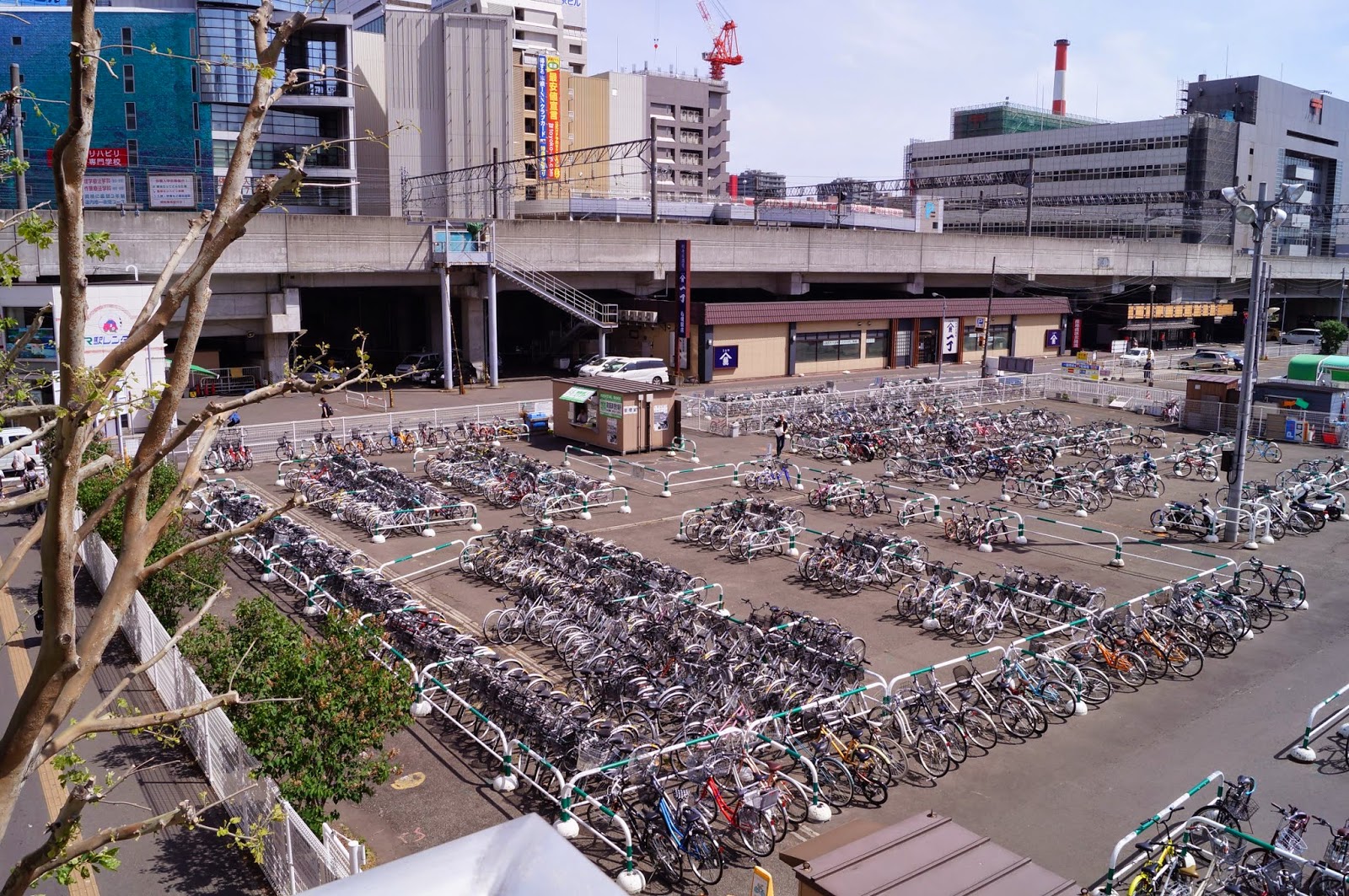 I also snapped this one while on a train on the Tokaido line: 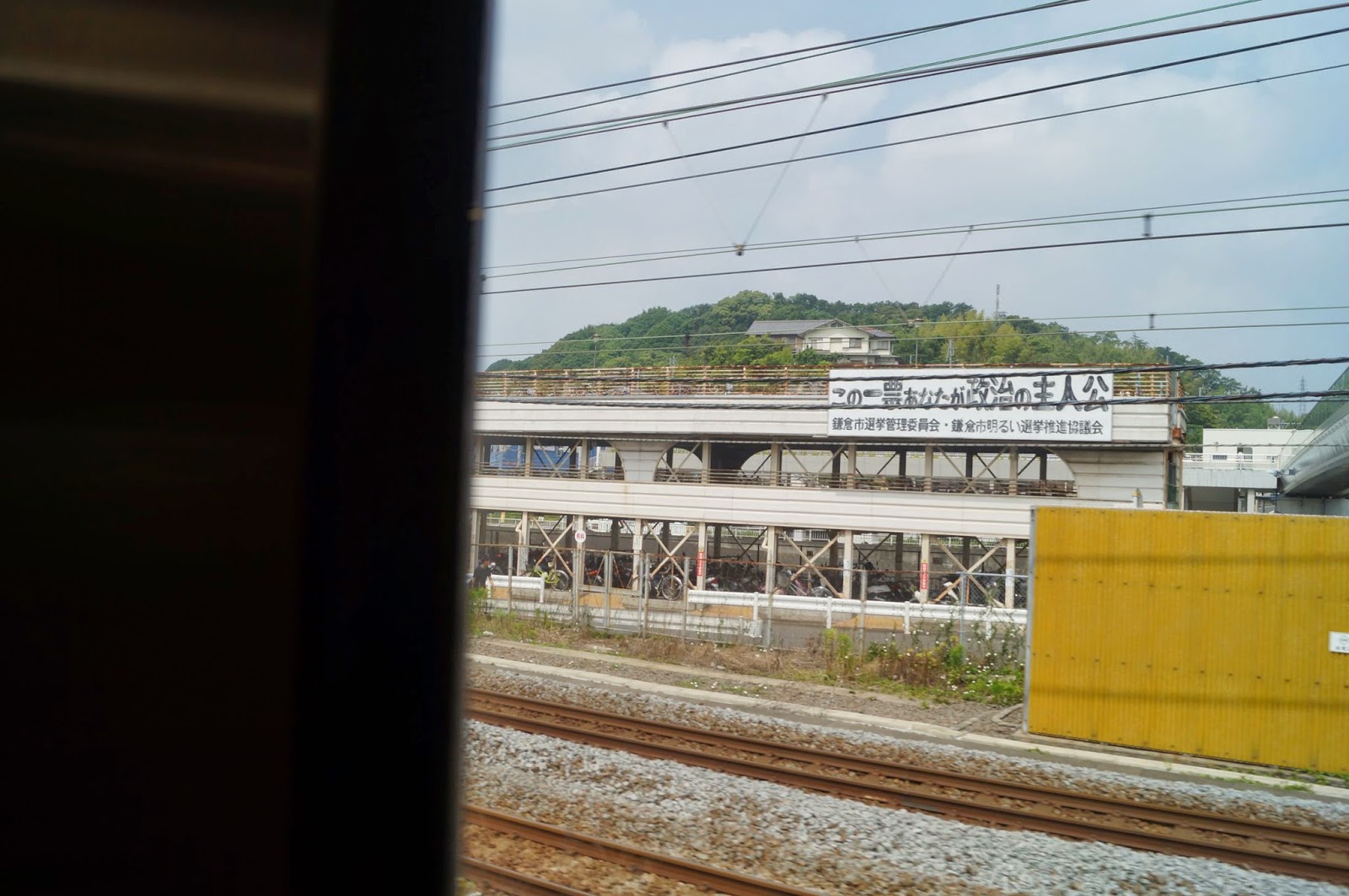 But this one in Chigasaki was the most amazing by far, it made my jaw drop when I saw it. 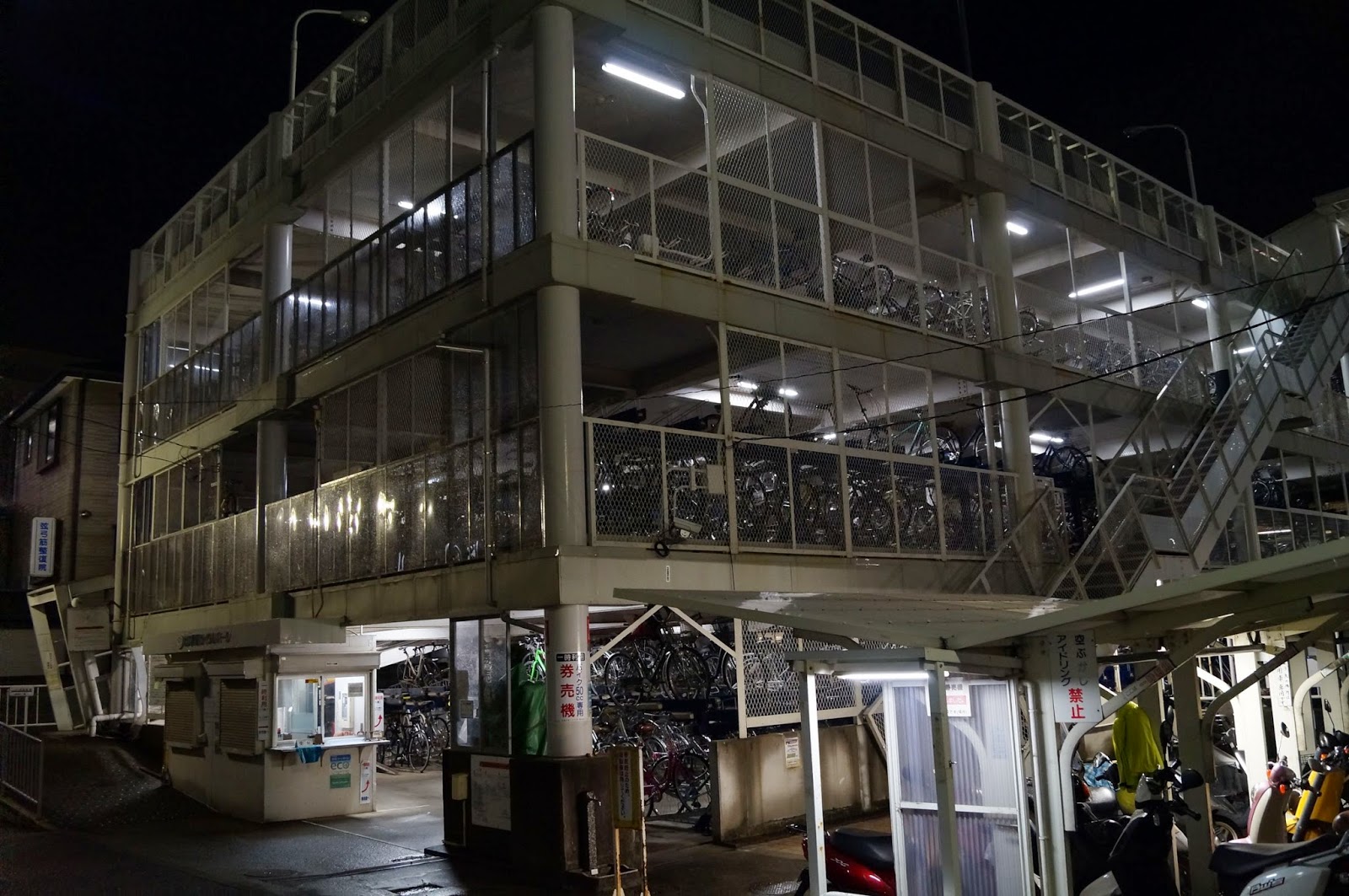 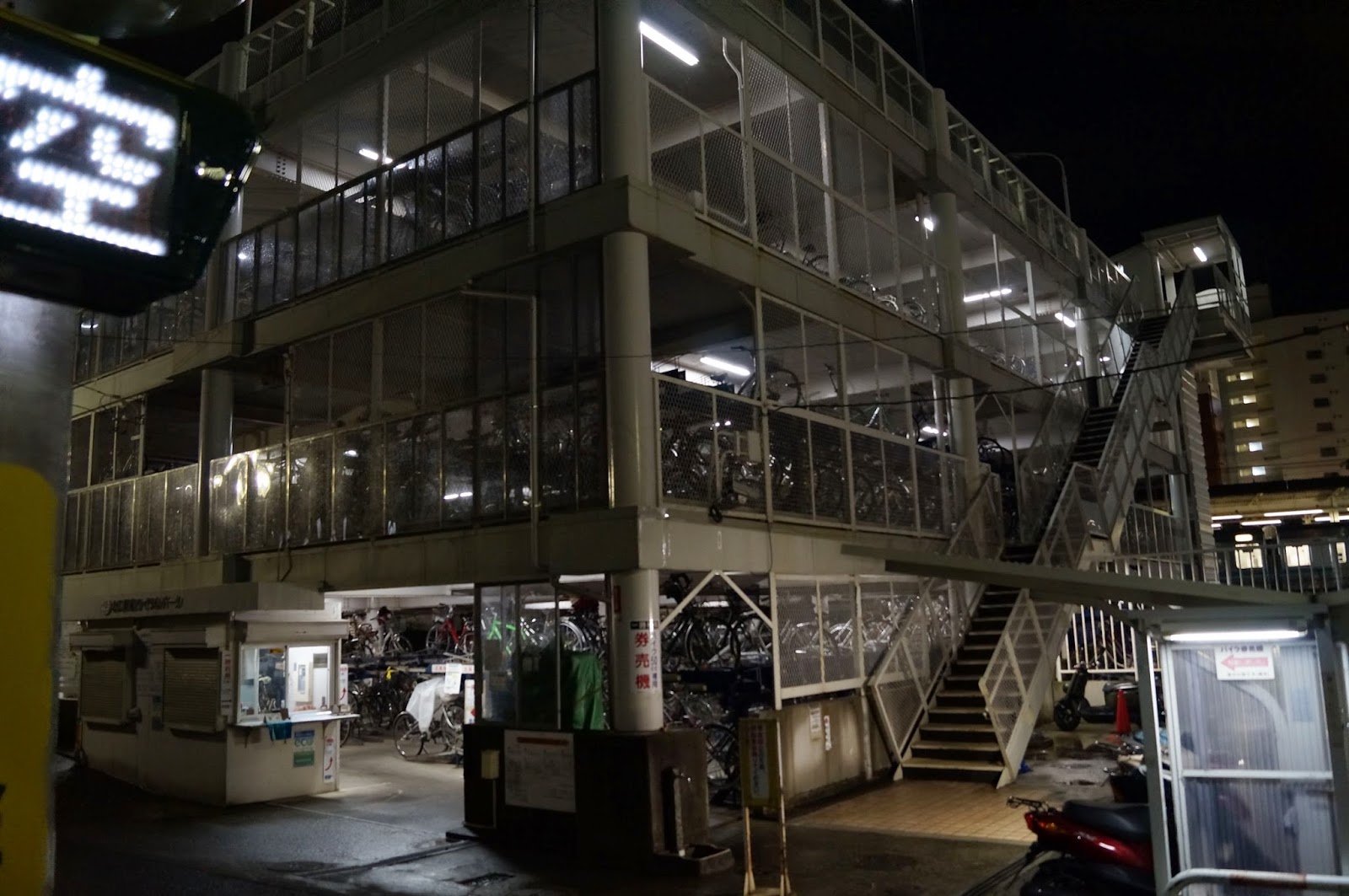 3 stories (4 including the ground floor) of bike parking, at 2 minutes walking distance from the station, with a security guard in a booth.

Okay, so these are just my quick observations. I personally like the Japanese city bikes a lot and wish I could get them here. Most cheap bikes in Canada are pre-assembled mountain bikes rather than utility bikes, which require add-ons like stands and racks that significantly increase the cost and are often assembled by semi-competent Canadian Tire staff. And most bikes in independent bike stores start at 300$, if you're lucky. I'd also be all for wheel locks and a mandatory registry system to deter crime and would like these secure self-locking racks.
Posted by simval84 at 12:57 AM