Well, it's been a long while since my last post. A combination of a busy life, a feeling that I had said most of what I felt comfortable saying and a desire not to repeat myself contributed to this silence. That being said, I have just found something that inspired me to break my silence.

Note, in this blog, I will use metric, here are easy, rough conversion factors:

In most North American cities, a new type of building has started to emerge, generally designed to offer urban condos for young professionals in search of more urban housing accommodations. Due to the homogenization of the market, these often share architectural traits and similar look, leading to some protesting about their "cookie cutter" nature, being built in all cities without respecting the local vernacular architecture.

Here is just one article criticizing the style: Why America’s New Apartment Buildings All Look the Same

Now, I'm not going to criticize them too much on the look, because:
That's not to say that this style of building is perfect, far from it. And this is why I'm writing this blog post, to criticize them for something I've yet to see addressed by most people, a problem of that style of development this is way more important than just aesthetic considerations and that I believe has major repercussions on the kind of housing provided by these new developments.

Without further ado... These new apartment buildings are just too fat!

Now that I have your attention, let me provide a few examples of apartment buildings in many different countries to illustrate the point.

Note that the depth of these buildings from Europe, Asia and North America, meant to provide accommodations to all kinds of households in urban (or even suburban) areas varies from 8 to 15 meters, with most being from 9 to 12 meters.

Now, let's look at some recent midrise condos in North American cities, shall we?

There are just an handful of examples, but with your knowledge of your own city and Google Maps, I invite you to locate new developments and also measure the depth of these new developments. They tend to average around 20-22 meters.

"Well, ok, but what does it matter? Doesn't it just mean greater lot coverage and density for a given number of story?"

Well, yes it does mean greater lot coverage, but it does matter a lot if one's objective is to make sure all households can find accommodation in urban areas. That's because of windows. Either because of regulation or of market demand, it is generally accepted that two types of rooms in an unit require windows on the outside: bedrooms and the living room. The larger an household is, the more bedrooms they need, at least, according to modern living standards. So, families obviously require apartments with more bedrooms, one for the parents to share, and at least one bedroom for every two children (and ideally, if children have to share one bedroom, it should be bigger than if they each had their own bedroom).

To sum up easily, with basic North American urban standards:

Visually, let's look at the floor area consumption and the exterior wall consumption of these family types:

We can notice that the exterior wall consumed increases much faster than the floor area as families grow more numerous. This suggests a new metric that ought to be considered, the Floor-Area-to-Exterior-Wall ratio. 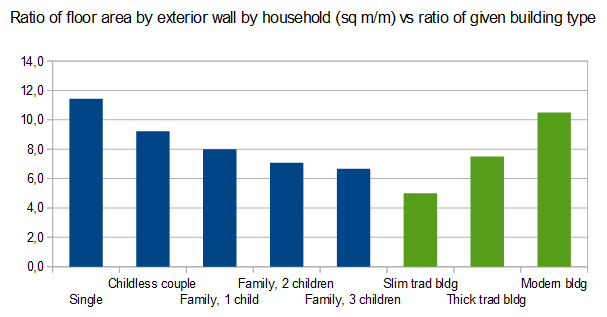 Alon Levy on Twitter remarked that living space by person in the US tends to be significantly higher than the numbers I selected. It's true that I used minimum floor area sizes reflected in Montréal and a lot of cities with expensive real estate... what happens if I adjust the numbers a bit for higher to take that into account? 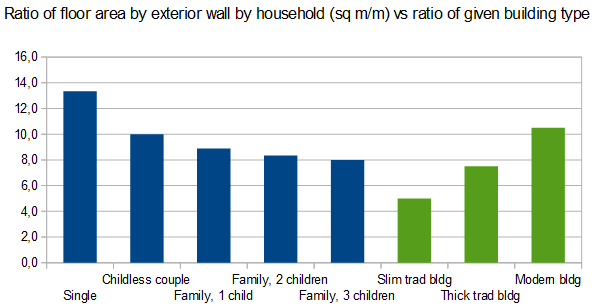 So even adjusting for bigger apartments, the conclusion remains the same. Now, luxury apartments or suburban apartments obviously go beyond that minimum, but I don't think these are relevant or typical of what could be build but cannot when buildings start getting too thick.

What this metric reveals is that the modern obese apartment building doesn't provide near enough exterior wall to provide the desired housing units of households with more than 2 people in them. As a result, if someone wants a 2-bedroom or a 3-bedroom unit, they are going to consume a lot more floor area than they would actually need. This has the consequence of increasing the cost of such units needlessly and by a lot.

For example, imagine you have a modern apartment building with a floor area to exterior wall ratio of 10,5, and you want to make sure all units in it have 2 bedrooms, then while these units would only need 72 square meters of floor area in a properly shaped building, you would be forced to provide each unit with around 95 square meters of floor area. That's nearly 30% more... and that also means that the cost will be 30% higher. So if you'd be able to make and sell 72-square meter units for 300 000$, the 95-square meter unit would need to sell for 400 000$ instead. That is prohibitively more expensive for a lot of people.

I could make geometrical explanations, but I think this is telling enough.

The result of this shape is that the vast majority of units in these new buildings are lofts or 1-bedroom units, and there are only rare 2-bedroom units or more, and they tend to be significantly more expensive than they ought to be. This makes families unable to profit from the recent boom in urban housing.

One could say that at least it responds a need, that's true, but this shape is pernicious because it can't be easily remedied. You can't easily reconfigure the interior of the apartment to accommodate more than 1-bedroom units. So you bake in a bias for these units for singles whenever you build these buildings. It's fine if it would be the occasional building, but it's too common for that. If we want to allow families to live in urban areas, we need to find a way to correct this.

Maybe we ought to implement regulation imposing a maximum ratio of floor area to exterior wall in new buildings.

Why it came about

So, if you're a developer who wants to maximize profit (meaning, produce the highest floor area possible from a lot) and you have to respect strict setback rules and height limits,  then the easy solution is to build a building that occupies all the lot you are legally allowed to build on and to build the maximum number of stories.

One problem is that once developers start doing that, then all lots are priced according to that approach that maximized FAR, and so developers who would use alternative shapes that reduce FAR but increase the possibility of family-sized units are punished financially by paying for a lot priced for a higher FAR than they can build. That cuts into their profits.

A solution would be stricter FAR control in regulation (to control lot prices) and looser height and setback regulations.

These last examples are buildings that also seek to maximize lot coverage while still taking into account the need for exterior walls to provide family-sized housing units, through the use of peculiar forms more complex than a simple rectangle.