Examples of zoning screwing up TOD

I spoke about how TOD needs to be privileged over building new lines, and how real TOD ought to be, pointing out Chigasaki station. Well, now let me rant about how North American planning practices can seriously screw over attempts to build rational cities centered around transit.

May I present to you: Radisson Station?

Radisson Station is a station near the eastern end of the Green Line of the Montréal Metro. It is a direct 20-minute ride away from downtown Montréal,
The station is close to a freeway, Autoroute 25, has a mall right next to it, but only a small section of the mall is near the station, the biggest part is farther away, and the station itself is mainly surrounded by plenty of parking, its location near a freeway means it is a big park-and-ride spot.

It actually has two entry points, one north and one south of a major arterial street. Here is what they look like:

Already, there is a massive TOD mistake, in fact two of them:

First, these buildings that are entry points of the subway system serve no other purpose. We're talking of the location that is the easiest to access from a subway, the location right on top of it, and the STM (the transit operator) is content to have two small buildings that serve absolutely no other purpose. To be fair, the southern entry point has an excuse, it is under high-tension power lines that limit what could be built, but the northern entry point has no such excuse. Neither do the dozens of similar entry buildings the STM has all over Montréal. The easiest idea ever would be for the STM to ask for bids from promoters to build high-density residential, commercial or office buildings to replace their mostly useless entry buildings. I think it could get plenty of cash that way.

Second, most of the land immediately adjacent to the two entry points is actually parking lots or a small bus terminal.
The result is that, apart from a few houses to the north-west, the nearest residential areas are at least 300 meters (1000 feet) away from the station, separated by plenty of parking and an uncomfortable walking environment. They really ought to build something instead in the area, and if they want to maintain the park-and-ride, they should at the very least make it a multi-storied parking garage to free up the rest of the area for development, or to shove the parking underground, under buildings.

But what I mainly want to bring attention to is something symptomatic of North American zoning practices, which this area illustrates to a T. First, a map of the north side of the neighborhood (forgive us Montrealers, our north is more west than north, we simply have the St-Lawrence river that we consider "south" even if it's actually more to the east).
On the previous image, there are 3 red dots with numbers in them, they are viewpoints I have captured from Google Maps to show what houses there look like, to see how housing evolves the further we get from the station.

Did you notice the problem here? No, I didn't mess up the order of the images. Believe it or not, the residential density INCREASES the farther one gets from the subway station! The condo towers here are no less than 2 kilometers (1,3 mile) away from the station, a 10-minute bus drive away (plus waiting time). That is the exact opposite you should do, you want to reduce transfers in transit trips, not increase them, so you want the densest concentration of housing and jobs as close to subway stations as possible, but it's the opposite that happens here.

How it came about

There is a logic to the madness here. The single-family houses at point 1 were built in the 1950s, at the time, there was no subway and plenty of space available for development in the region. It was actually considered a relatively far suburb, in fact it was farther from the downtown area than the official suburb of Longueuil. So in that context, single-family houses do make some sense.

The duplexes seen at point 2 were built at about the same time as the subway station in the 1970s. At the time, such buildings (semi-detached and duplexes with parking in the basement and the living area built above) were all the rage in Montréal as they were able to get some density yet still have enough parking according to the paradigm of automobile-focused development. As Montréal had little land to develop and the border of suburbanization had long gone even farther, some higher density was warranted.

The condos seen at point 3 were largely built in the 1990s and the 2000s. Places left to develop in Montréal had grown exceptionally rare (in fact, this whole area is part of an ancient suburb called Anjou that was merged to Montréal in the late 1990s). So the land was very expensive, and the suburban growth now extended to areas twice as far as this. The idea of building higher densities had now become more popular.

So if you look at the chronology, every "layer" of residential density actually made perfect sense when they were built.

The issue then becomes: why are we keeping these areas as-is when the context has changed so much? If 15-story condo towers are justified 2 kilometers away from the subway station, why wouldn't they be justified 100 meters away?

Well, because of zoning of course. The area is zoned as sector 14-06:
And this sector is identified among a lists of sectors where the zoning is built to "preserve the area's 'character'". It is even written explicitly in the borough's official urbanism plan.
Now, this is a plan, not the gritty details. What does average building-to-lot ratio mean? The plan doesn't say, but I bet there is a document somewhere that does.

Still, as the zoning stands, it ought to be possible to slightly densify the area, but you would need to buy and destroy the existing building which has value as a house, around 400 000 to 500 000$ in the area. So that means that if you allow density to double at most, the houses that will be built will have to absorb an additional 200 000$ to 250 000$ in construction cost, likely making them too expensive, unless they are luxury housing.

This is where an approach that allows for much higher density and piecemeal replacement would work much, much  better.

Other examples: recent condos in Québec

In Montréal, all cities of the metropolitan area accepted a plan to supposedly create a sustainable metropolitan area, to increase density and concentrate development in TOD areas. This sounds good, but in practice, in many, many cases, what this resulted in is municipalities deciding to allow low-rise condo buildings on the outskirts

We always used to have a few condos and apartment blocs near commercial areas in our suburbs, but with this plan now in place, we have seen something happen which was rare before. In order to satisfy density goals, cities started requiring higher density developments from developers who develop on the outskirts of existing cities. The result was pretty poor: condos with 40 to 60 units per hectare (16 to 24 units per acre) built on the edge of field, or near highways, where there was nothing in close proximity. In order to save on costs and since land is cheap, these residential-only developments are generally surrounded by big parking lots.

You can see this in real estate listings on centris.ca, which shows the WalkScore of each listing. The WalkScore is a way to account for "walkability" depending on proximity to services and businesses. The score goes from 0 to 100. From 0 to 49, locations are car-dependent, from 50-69 they are considered somewhat walkable, from 70 to 89, they are very walkable, and  from 90 to 100, they are considered walkers' paradise. All the following listings are thus considered to be in car-dependent locations. 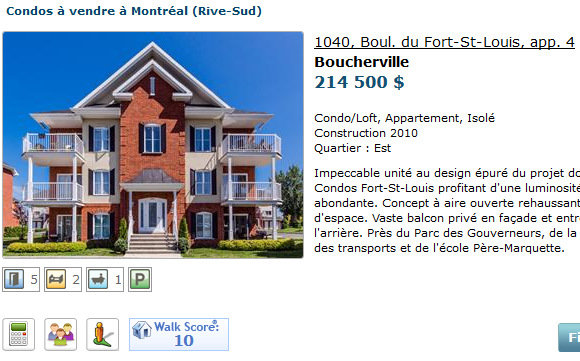 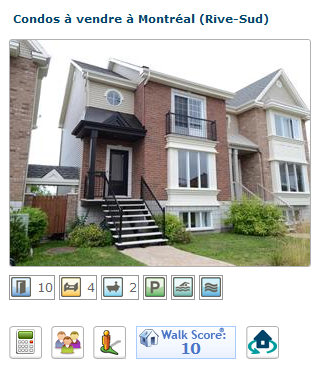 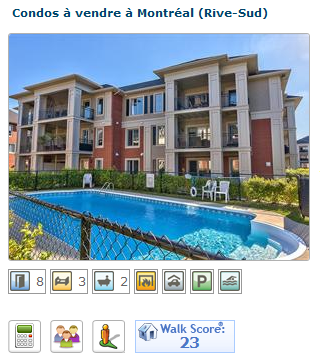 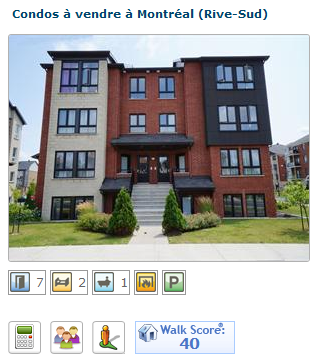 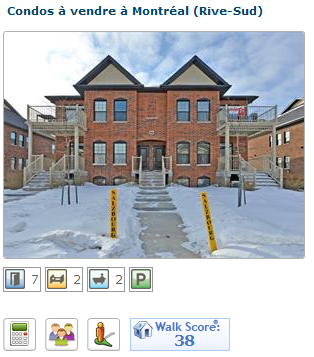 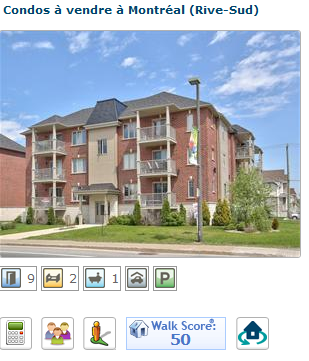 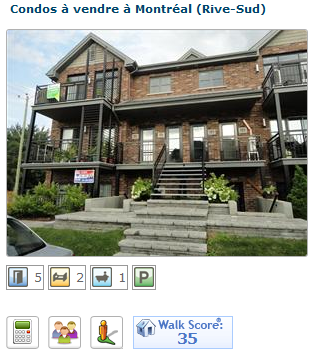 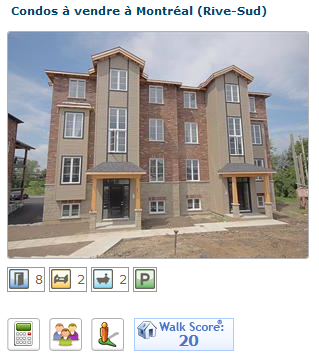 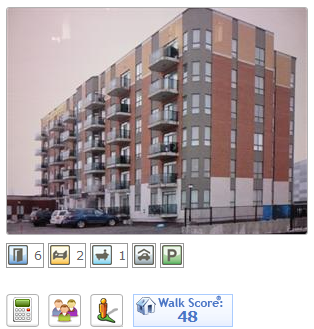 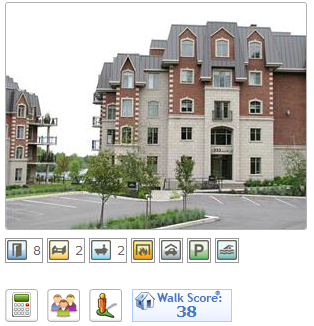 Most suburbs do have locations that have 70-80 WalkScore, so it's not like all the suburbs are car-dependent deserts.

There are still some legit TOD going on, condos being built in areas with 70+ WalkScore, but the amount of car-dependent condos is very high. The one advantage I can see is that these mostly 1000+-square-foot condos are pretty affordable, ranging from 180 000 to 250 000$, allowing the new generation to have affordable housing without going too far into the exurbs. Indeed, most people I know of my own age who have bought a home have bought, at least initially, a condo like these ones. Some have gone on to houses, others are still in condos. It's also an interesting tale of what happens when developers have to try to build density with at least 2 parking spots per unit because of suburban parking requirements and because that's what their clients will need (they are in car-dependent areas after all). And all that while trying to avoid underground parking since it's too expensive to build while land is cheap. Note that alleyways in back are very rare in Québec.


Again, this is due to the zoning which makes it near impossible to densify places that are currently walkable in most instances, as they're often currently occupied by low-density housing which are about the only thing that can be built in the area. Many old houses exist that are quite cheap but on big lots in the walkable areas of suburbs, which would be ripe for replacement. Here are some images that I got from searches on centris.ca for single-family houses for less than 300 000$ in areas where the WalkScore is between 60 and 85: 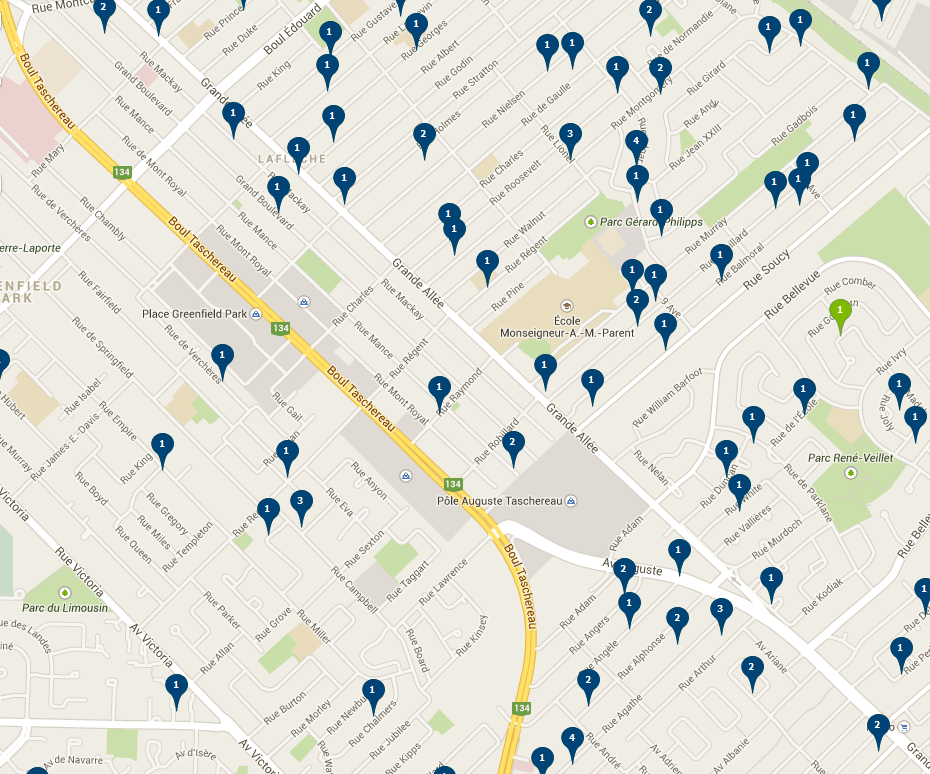 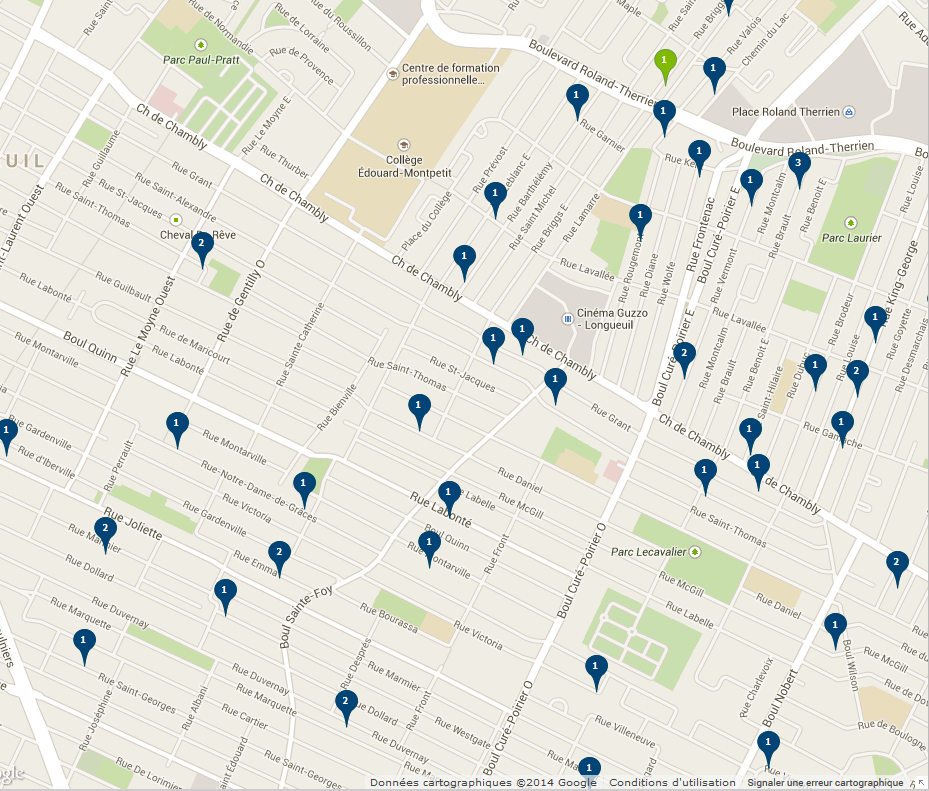 There are plenty of old single-family houses ripe for teardown, which could be replaced piecemeal by townhouses, triplexes or even 6-condo building with some imagination (and a reduction of parking requirements to one per unit). For instance, most single-family homes in Longueuil tend to have a lot that is 20-meter wide (66 feet) and 30-meter deep (100 feet). Well, these buildings also are built on lots of those exact same dimensions: 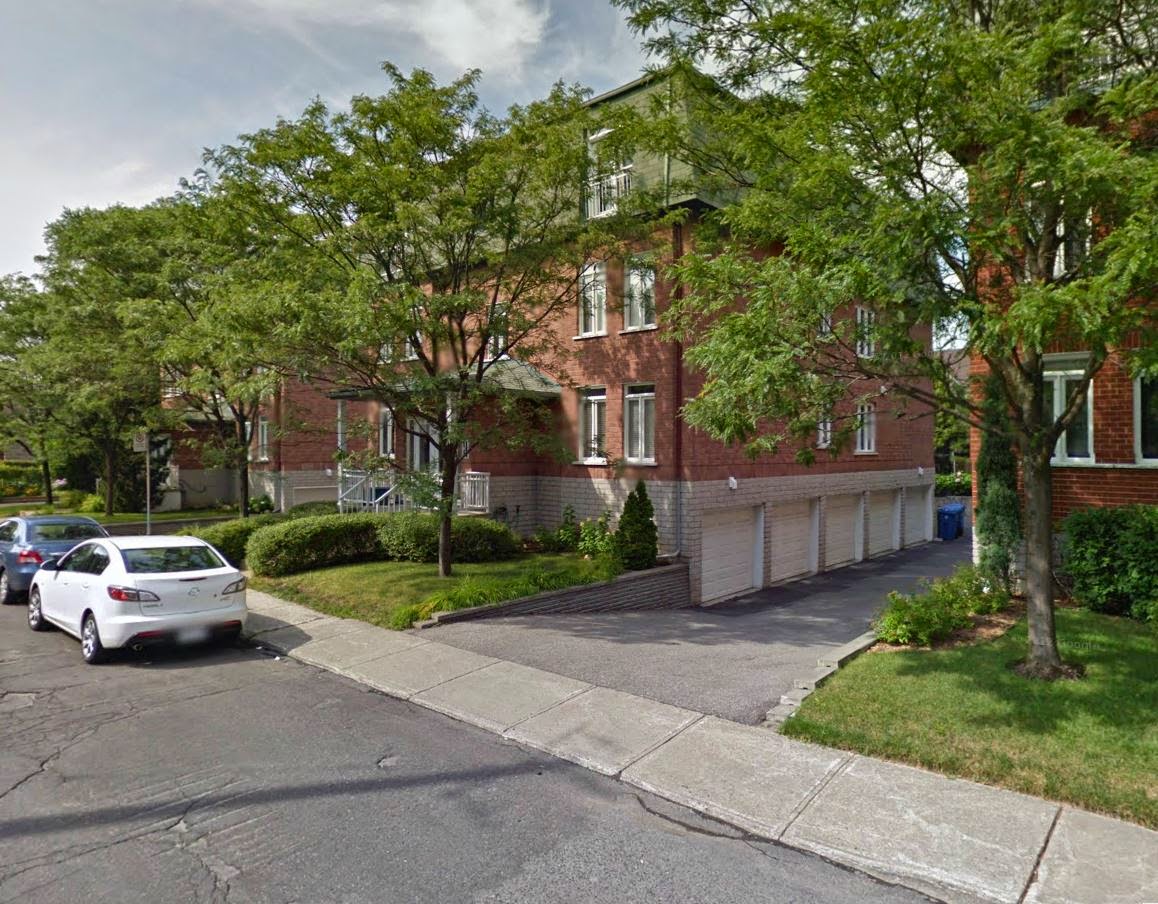 These are just demonstrations of how the mentality of urban development that dominates in North America that "once an area is built, it should remain that way" is deleterious to actually having rational, efficient cities. Building dense areas on the outskirts of metropolitan regions is not an answer, these areas are generally transit-poor and unwalkable, which results in denser areas which need as much parking space as regular car-dependent suburbs, but the density means that parking lots dominate and make for a very poor looking area that is unlikely to draw people in or keep them there (except through low prices). Essentially, you have streets, parking lots and buildings, and not much else.

This is also why zoning has to be reformed. Zoning needs to allow higher densities and piecemeal densification in order to allow cities to evolve and to respond to higher demand for desirable areas.
Posted by simval84 at 11:38 AM