Though the Japanese city of Sapporo is most similar to the Texan cities in terms of how its core was initially built, I cannot help as a Montréal resident to notice the many similarities between the two cities. To the point where I have called Sapporo "Japan's Montréal".

I hope I have made my case for the similarities between the two cities. Anyway, I'm not campaigning for twinning the cities and organizing a Montréal-Sapporo festival... yet. This is an urbanist blog, so let's look at the development models of the two cities.

Montréal and Sapporo follow two very different urban regulation models. Montréal is quite uniform overall, being a bit European in the sense that it has entire neighborhoods of 2-3 story buildings packed really closely together and tends to favor uniformity with zoning regulations.
Meanwhile, Sapporo follows the Japanese model that results in eclectic neighborhoods, with multi-family and single-family housing close together, with occasional mid-rises/high-rises in otherwise low-rise areas. The one uniform trait is that tall buildings tend to be on wide streets (regulations capping building height with street width) and near transit stations, and that buildings on narrow streets are almost all low-rise. This model is much better at allowing cities to evolve and grow, whereas the European-inspired model of Montréal is hostile to rapid area changes. It also enables mixed used development much more readily. 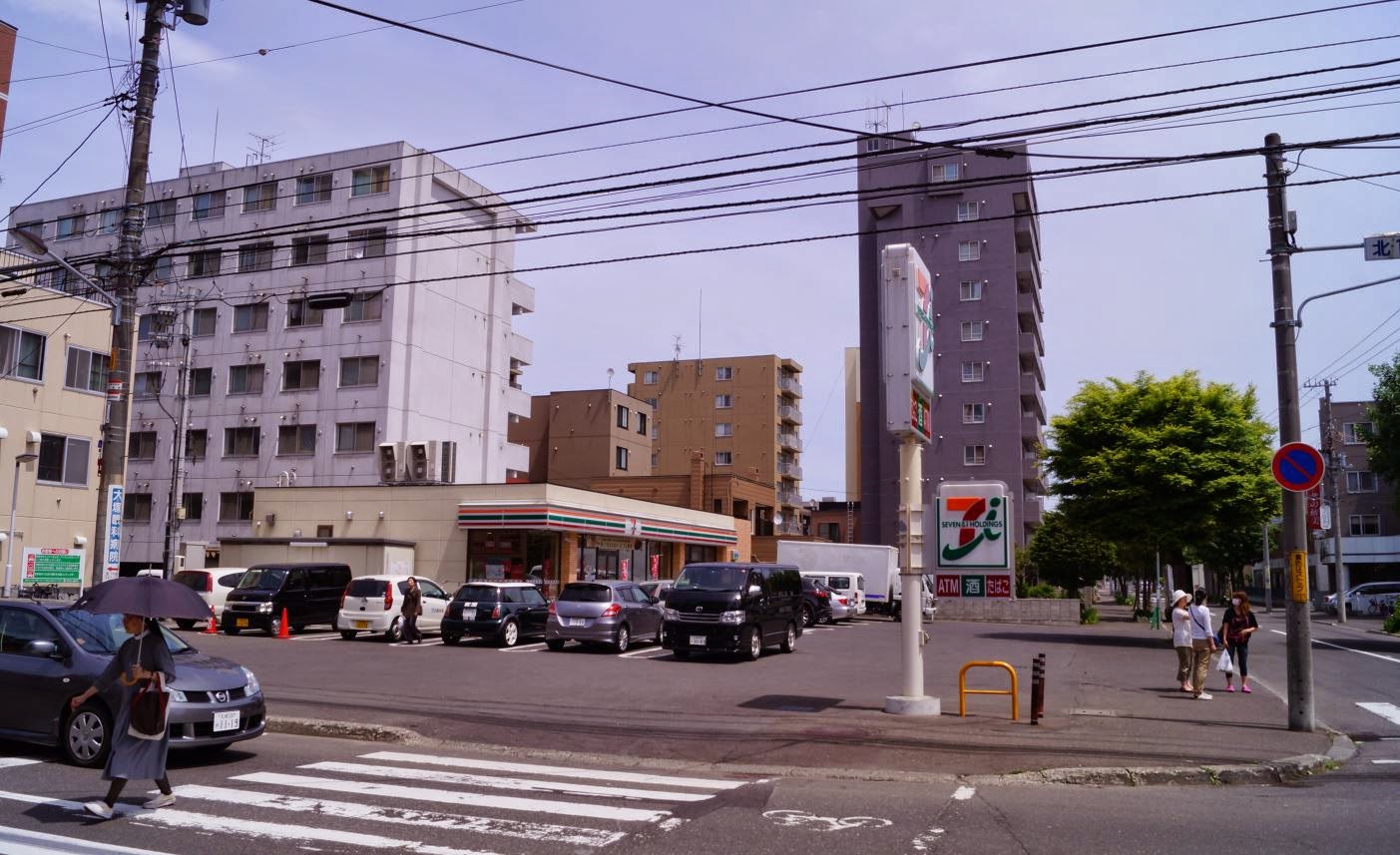 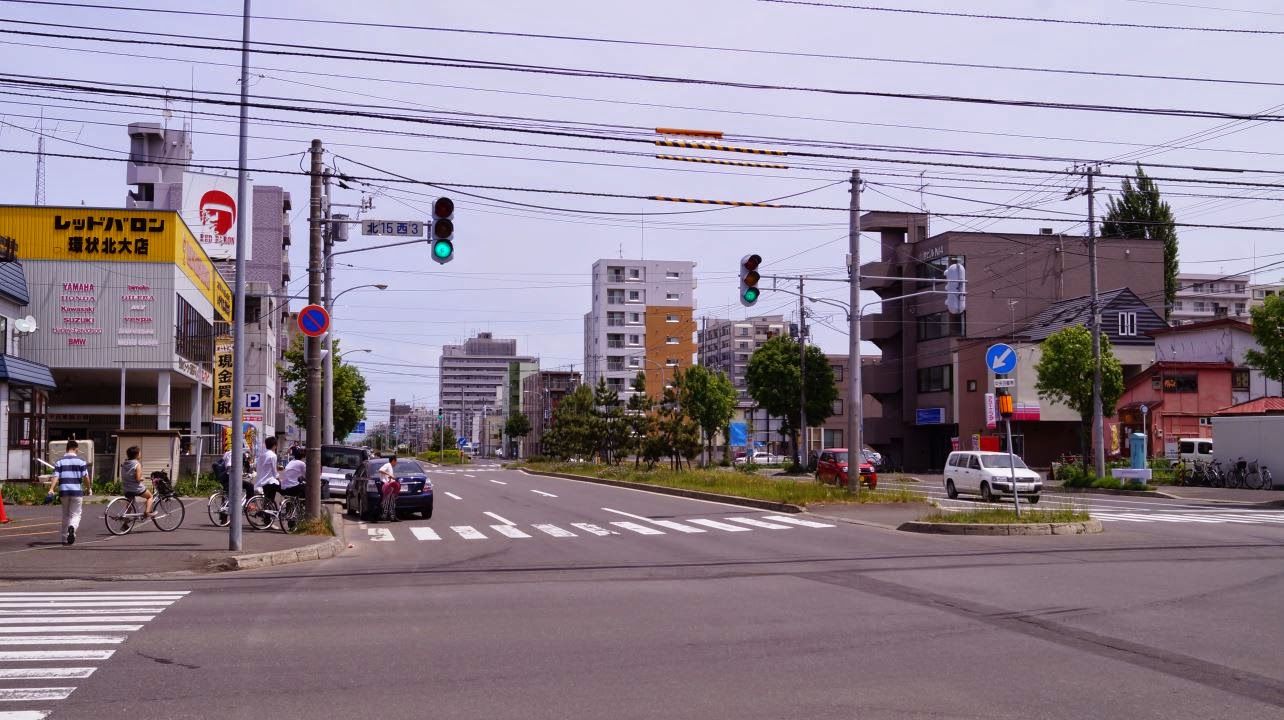 Unfortunately, I seem not to have taken pictures of the Shinsapporo (new Sapporo) station area, which suffered from severe "tower in a parking lot"-itis.

What is the result of these two modes of development?

First of all, images of Sapporo and Montréal from the sky, where you can see urban development and how it spreads:
Montréal's suburbs seem to develop in nodes, because of the agricultural protection law, which limits how cities can sprawl, by limiting developments to "white zones" centered around old villages, causing developments to "skip" agricultural fields. Sapporo develops more as a mass radiating from the center.

What is of greater interest is where residential constructions are happening right now.
What's interesting here is that, if we use new housing as a proxy for where new residents go to, in Sapporo, despite the higher density of population than Montréal, most new constructions happen in Sapporo itself, not its suburbs. In fact, the share of new constructions being built in the core city is higher than the city's share of metropolitan population (79% of new housing, 73% of population), meanwhile the opposite is true in Montréal (35% of new housing, 42% of population). What this indicates is that the city of Sapporo is growing faster than its suburbs and is likely to maintain a major share of the metropolitan population. Meanwhile, Montréal's metropolitan area is sprawling, suburbs are growing much faster than the core city which is choked by its inability to keep growing housing supply to deal with rising demand, a problem that doesn't affect Sapporo it seems.

Montréal also suffers from a much more developed freeway system, which are free to use (apart from a recent bridge that has a modest toll). This allows suburbs to spread much farther than in Sapporo.

The ability to add housing where it is in demand also leads to an interesting effect regarding the subway.

If you have the impression that Montréal's subway system is bigger, that's because it is.

So Montréal's subway network is more extensive. is it a clear win for Montréal? Not quite.

So overall, both subway networks serve roughly the same population, but in terms of ridership per station or per kilometer of track, Sapporo's subway is much more effective, offering 35% more riders than Montréal's subway.

Well, my theory, from having seen Sapporo and Montréal up close, is that the Japanese mode of development is much more conducive to TOD than Montréal's European-flavored mode of development. Indeed, I've pointed out recently that many of Montréal's subway stations that have been around since the late 60s have seen little to no redevelopment around them, with many areas being severely below optimal density, with few jobs or attractive commercial areas around. Meanwhile, areas around transit stations in Sapporo, whether in the downtown area or in the fringe of the network, tend to attract high-rise residential blocks and compact, urban-styled malls. Since Montréal's zoning prevents these from happening in areas that are already built, malls and high-rise developments occur outside the subway network's coverage, inciting people to take cars to reach these developments.

Here is a prime example:

This is a mall located at the edge of the Green line of Montréal's metro, the Carrefour Angrignon. The mall was built years after the metro was built.
The mall is not only of a typical suburban form, surrounded by plenty of parking, but it is located at a 10-15 minute walking distance from the subway station. What is built over the subway station then? Nothing, nothing at all. There's just a corner store in the station itself and a surface bus terminal.

Meanwhile, let's look at a mall likewise located at the end of a Sapporo subway line and contrast:
I've taken pictures of this mall while on my trip to Sapporo:

This is an urban, compact mall with parking built over the mall rather than around it. It is also much closer to the station, a mere 2-minute walk away, it's even connected to the station with an underground passage for the winter.

Montréal's subway performs very well in terms of ridership for a North American subway, but the reality is that this is mainly due to two things:
There has been very, very little TOD in Montréal apart from some construction downtown, and the station on the South Shore, in the suburb of Longueuil, which was in an undeveloped area that is enclaved by highways on three sides, making it disconnected from the rest of Longueuil.

Where Montréal beats Sapporo hands down in transit use is the bus system, just the core city's bus service carries about 240 million passengers each year (suburban bus services can add maybe another 80 millions), versus 105 millions for Sapporo's now private bus networks. But where some might see this as a positive, I will see as a negative... Sapporo's mode share shows that though people use transit a bit less, they walk and bike in much greater numbers than in Montréal. The result I guess of strategically placed density and mixed use. Where Sapporo residents would walk, Montréal residents might have to take the bus, because the area is car-oriented and inhospitable to pedestrians.

I think that in a well-built city, dense, with a good mix of uses and with decent biking infrastructure, the role of buses is essentially a niche role. Buses, because of the wait times and the high number of stops, are slower than bikes in urban areas. And below about 800 meters (half a mile), walking, at least for an healthy adult, is likely to be faster than taking the bus, even a frequent one with headways of 10 minutes, once one takes into account the waiting time and the detour to get to bus stops, even if the bus line goes straight to the destination.

OK, so what do I gather from this analysis? First, that lax zoning is a boon to transit investments, as it results in automatic TOD which maximizes transit use on rapid, high-capacity lines. The Japanese mode of development, chaotic as it is, makes it less necessary to build very large subway networks as developments concentrate along the lines and reduces the need to extend the network further.

Second, the Japanese model of development keeps core cities strong by allowing a lot of new housing to be built in them, so less people are forced to move out due to housing shortages. Indeed, going by the new units' data, it seems that Sapporo will grow faster than its suburbs in the near future, whereas Montréal is stagnating and allowing its suburbs to grow at a much faster pace, losing more and more to sprawl, a fate that is common to most North American cities.

I have not spoken of housing prices, but I must point out that Sapporo is a very affordable city by most standards, even compared to Montréal, which is pretty affordable for a big Canadian city. Here is a short report on average housing prices provided by Suumo.jp for the central ward of Sapporo. 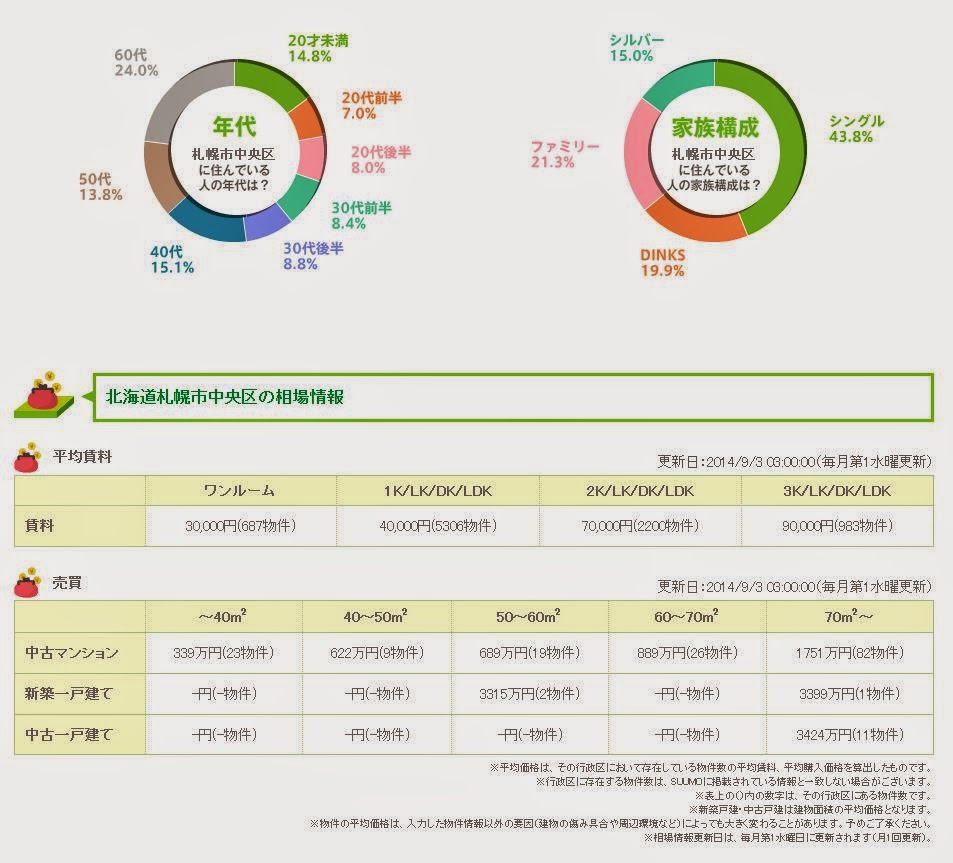 Some people say higher densities correlate with higher housing prices. This doesn't seem to be the case for Sapporo.

Again, much can be learned from the Japanese mode of development. Though some may be put off by the resulting dense neighborhoods of eclectic buildings, it seems to me that we ought to reform the way we build cities more in the Japanese way. Without necessarily dropping everything and copying them wholesale, there are quite a few aspects of their way of doing things that ought to be emulated.
Posted by simval84 at 3:11 AM