The importance of speed in transport mode selection

Urbanism cannot be studied without looking at transport. Basically, all urban developments at all times follow the primary transport axes. In Québec, where I live, most large cities, meaning Montréal, Québec, Trois-Rivières, Saguenay, Saint-Jean-sur-Richelieu and Gatineau, are all located on the shores of important rivers. That is because the rivers used to be the major "roads" of the time, as most transport, especially freight, took place on rivers.

Similarly, the character of developments is strongly influenced by the type of transport link they happen on. A city built around a railroad track will be much different from one built at an highway interchange.

When there is competition between different transport modes like walking, biking, transit and cars, what is the #1 factor that determines which transport will be dominant? Why is it that only 37% of all trips in Munich use cars whereas 88% of all trips in Houston do?

In one word: speed.

Okay, there are other factors, like cost (non-negligible in developing countries), safety and comfort, but the main factor is speed. More precisely the relative speed of each mode compared to others. A mode of transport can be supremely comfortable and be free, but if it takes you 3 hours to get anywhere on it while you can be there in 15 minutes by opting for another mode, you will never take it.

So, the faster a mode is, the more attractive it becomes. And in terms of speed, cars have a huge natural advantage. They can go much faster than people can walk, run or bike, and unlike public transit, people in cars do not have to stop frequently to let passengers get in or get out, neither is there a waiting period before you can take it.

In fact, if all modes share a street, with pedestrians on the sidewalk but without reserved lanes for transit, then cars will average around 30 km/h (because of stops and lights), buses with a lot of riders will have a commercial speed of around 15 km/h and pedestrians walk at 5 km/h.

Considering the previous information, what would a basic city with only basic streets look like? Well, people tend to choose where they live largely based on proximity to work and to businesses, like about 30 minutes to get to work, and 30 minutes to the downtown if it's strong. If the city has streets in the form of a grid, with streets in east-west and north-south axes, there will be three "layers", three different typological zones of the city, looking a bit like this: 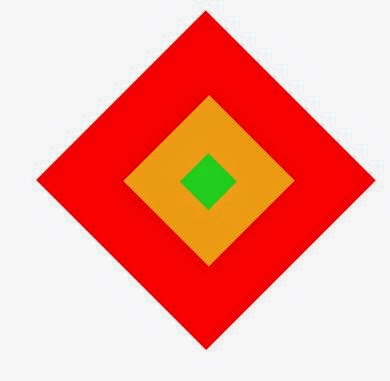 The green zone is the walkable zone, where walking is a convenient way of getting to the jobs and businesses of the downtown area. In the orange zone, walking takes too long, but transit still does the job. Finally, in the red zone, both walking and transit take too long, the car is essentially the only mode that can get people to downtown in an acceptable time.

These zones represent more than just transport trends, they represent different kinds of neighborhoods. The  green zone will be very dense with a lot of mixed uses, as pedestrians do not need much space to get around, but they do need much proximity. The orange zone will be a bit like the green zone, as transit also doesn't require much space and people there will want proximity businesses so they don't need to take a bus to get a carton of milk, but it will be a bit less dense and will have likely less offices. Finally, the red zone will be sprawl, as cars necessitate wide roads and plenty of parking, plus people do not like living near congested streets, so uses will tend to be separated.

Note that this doesn't mean that all people in the green zone will walk, or all people in the orange zone will take a bus. A car remains a viable mode of transport in all zones, some short trips may be done by walking in all zones and some in the red zone will not have cars and will require some form of transit, even if travel times will be excessive. But the zones demonstrate what transport mode should dominate.

Of course, cities can look differently. They can have various "centers" that reduce the importance of the traditional downtown for example. But if we look at the basic unit of the city and ignore these complications, there will be another factor surrounding speed that will strongly influence how a city develops: rapid links.

It is rare that big cities only have 50 km/h streets where all users share the street. There are frequently rapid links that essentially come in two forms: highways and rapid transit (trains, subways, LRTs, trams, BRTs...).

The highway is a transport link reserved for cars, they can use it to go at a constant speed, never needing to stop for there is no at-grade intersection, no stop signs nor traffic lights. People can only get on the highway or get off at interchanges that can be kilometers away from one another. Generally, traffic will move at around 100 km/h, even when the speed limit is supposedly lower.

Rapid transit links are a bit similar... they have a limited number of stops like highways have limited numbers of interchanges, they are located on exclusive right-of-way where they can often reach higher speeds than are allowed on regular streets. But since they still need to stop regularly at each station, the average speed will instead be around 40 km/h maximum (trains and subways), but it can be around 30 km/h if they are on the surface and have parts of their route where they are on the street and forced to slow down.

These rapid links are essentially shortcuts... but highways are shortcuts available only for cars. Pedestrians are forbidden to use highways and even if they could, they wouldn't go any faster, except by hitch-hiking. Buses can take them, but as they cannot stop on the highway, they can only be express buses, which offer no flexibility and poor service for most people, unless they happen to head exactly where the express is going.

Here is what the city will look like. The highways are the dark lines, the interchanges are the white bubbles. 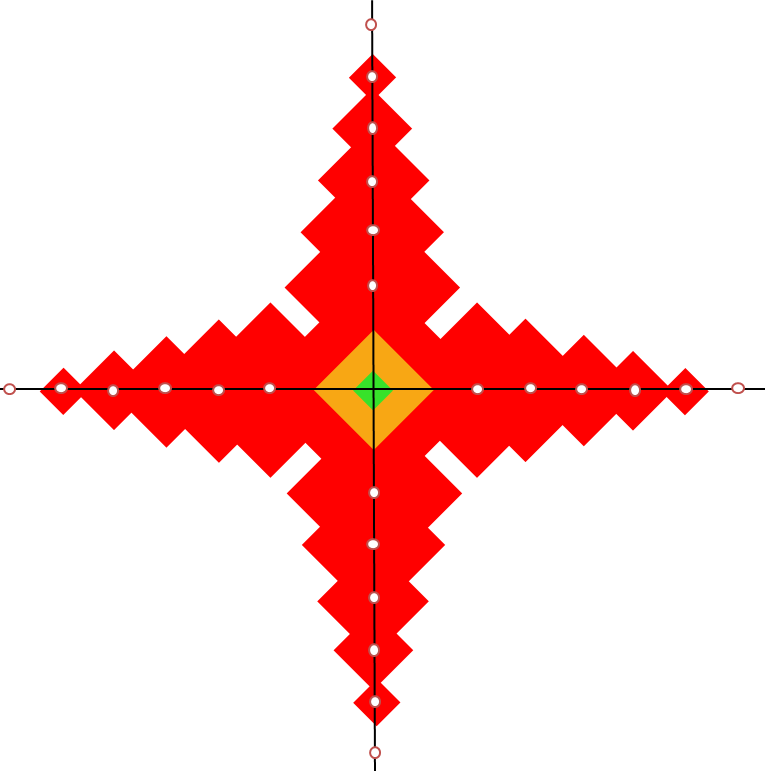 The green and orange zones are still the same size, but look what happened to the red zone. It has spread far and wide and dominate even more the city. Almost all the city is now sprawl as the only way to get around worth a damn is the car.

This is what most American cities have done, building lots of urban highways but few if any rapid transit. The only way to get around the city is thus the car, there is no choice. Therefore the modal share of the car is around 90%, if not higher.

But what if we don't build highways, but subways instead? In fact, on the same lines where the highways used to be, let's build two subways, with regularly spaced stations, accessible to transit users and pedestrians. The subway thus doubles both as a shortcut in a transit trip and in a pedestrian trip. The result is very different. 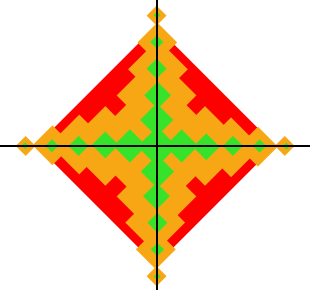 As we can see, the subway just made a completely new city. The majority of the city has become reachable by transit and a significant area is in fact accessible on foot (and subway). There are few terrains where the car is the only viable way to get around. The result is a much more walkable and denser city.

Remember that the car is still a viable way too get around in the orange zones. In fact, the green and orange zones both represent CHOICE between different viable transport, they do not impose mode of transport.

Subways can also sometimes act as shortcuts for car trips, using park-and-rides, with people parking their cars at stations and doing the rest of the trip in the subway. 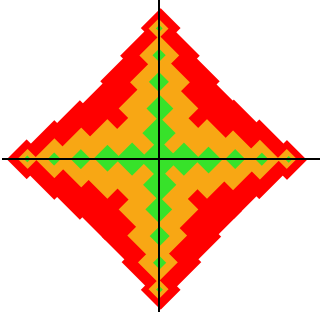 Doing this adds red zones, but overall the picture remains the same: a dense, walkable city.

All these previous images aren't to scale with each other, so let me put them all on a single image to see what they would look like compared with one another in terms of size. 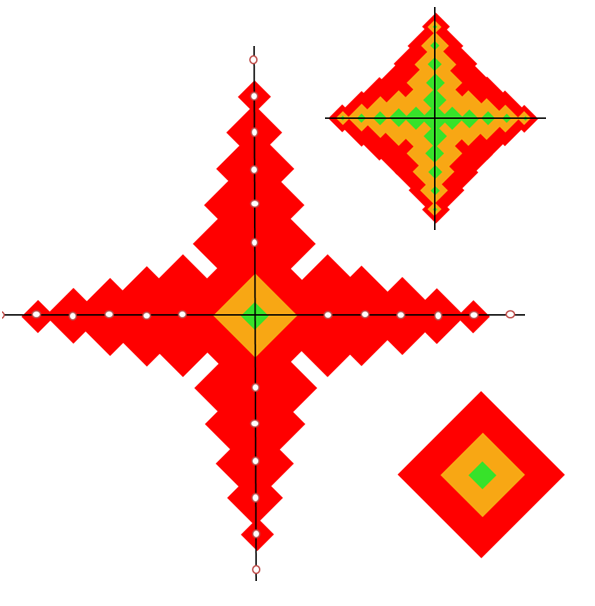 The highway city will sprawl much farther than the basic city or the subway city, thanks to the greater absolute speed of cars and highways. This means that as soon as you add an highway in an urban area, you open lands to development which will necessarily be car-dependent. Look what happens if you build the highways AND subways of the previous examples in the same city: 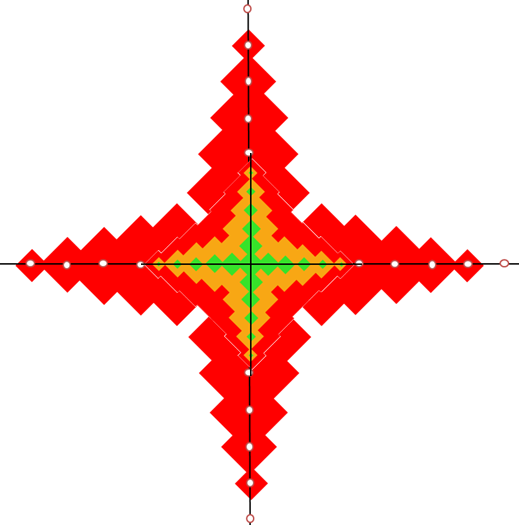 The green and orange zones are still biger than the base city, but even rapid transit cannot compete with the speed of the highway. Most of the city will be sprawl.

By the way: congestion

Congestion is an equalizer here between transit and the car. When streets and highways are congested, the average speed tumbles significantly. If transit has ways to go around the congestion, the speed gap between transit and cars is much reduced. However, congestion cannot be seen as an appropriate way to equalize the different modes, for it is present only during peak hours. The rest of the time, without congestion, cars reestablish their advantage.

A congested city may have a better balance during peak-hour commuting, but will stay be as unbalanced as non-congested cities in terms of the speed of the different modes of transport.

If we assume that building cities offering multiple viable alternatives for transport modes to a majority of residents is a shared objective, then there is an unavoidable conclusion: highways have no place in an urban setting. If they are already present, they should be converted into urban boulevards, reducing the practiced speed without reducing the capacity of the road, this will allow a reduction in the amount of city land where only the car is a viable transport mode. Also, rapid transit is essential for big cities, because they have a major impact on the increase of walkable and transit-friendly areas, since they can counter the inherent speed advantage of cars.

So, in a city, highway NO, subway YES.

This doesn't mean that we shouldn't build highways, by all means, build them BETWEEN cities, but not IN them.

This lesson seems to have been well-learned by other peoples. For example, Germany is well-known for its highway system, the fame autobahns where many places have no speed limit. However, these autobahns only link cities together, they generally do not penetrate cities in themselves, leaving vehicles on urban boulevards limited to 50-60 km/h. Autobahns go around cities, they do not go through them.

Here is Munich, a major city that has a strong industrial base and has never been in Eastern Germany: 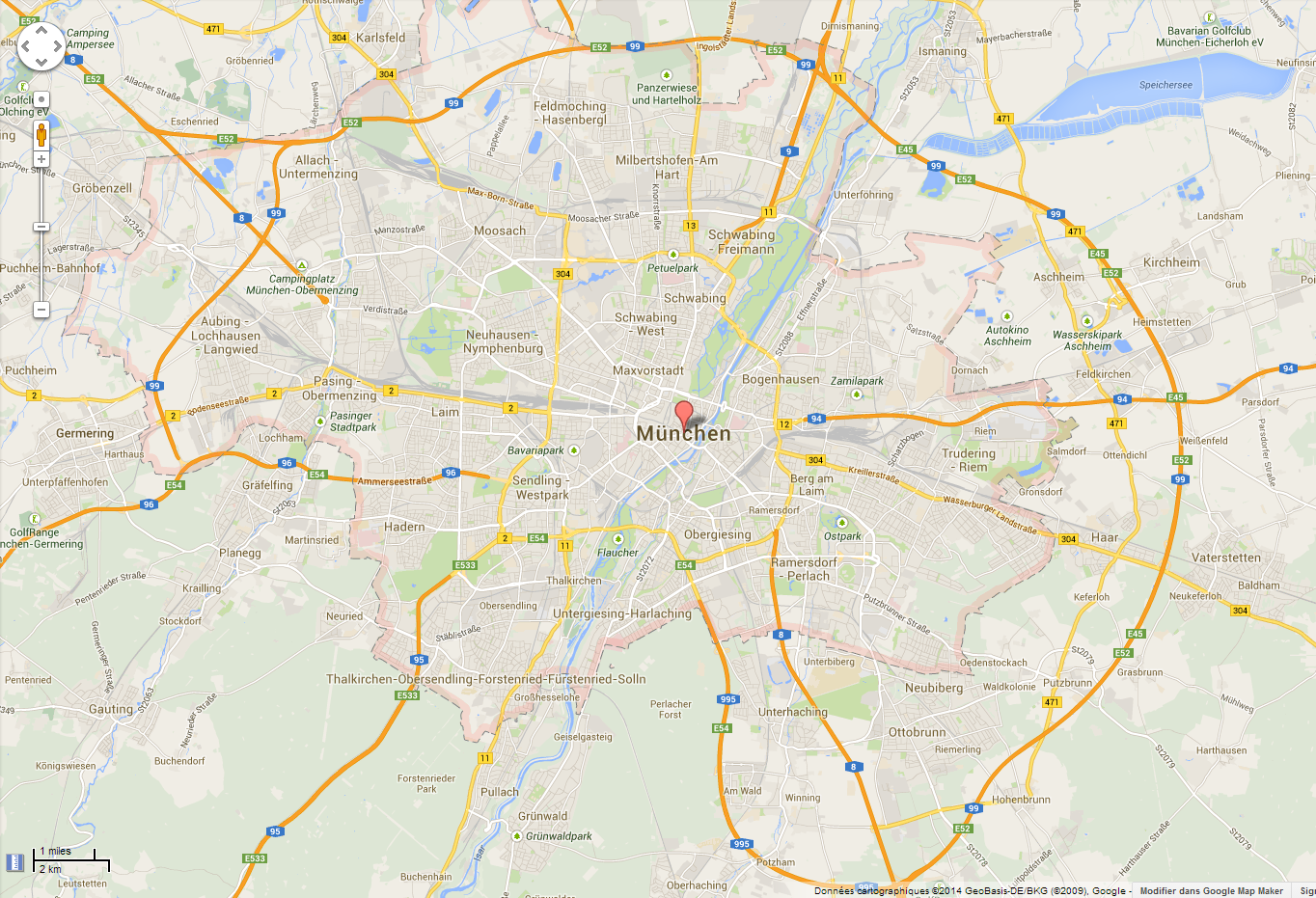 The autobahns are the dark orange lines, the yellow lines are regional roads or boulevards. Note how the core of Munich has no highway within a few kilometers. In fact, there is a 150 square kilometer zone without any highway inside the city.

But if we look instead at rapid transit links... 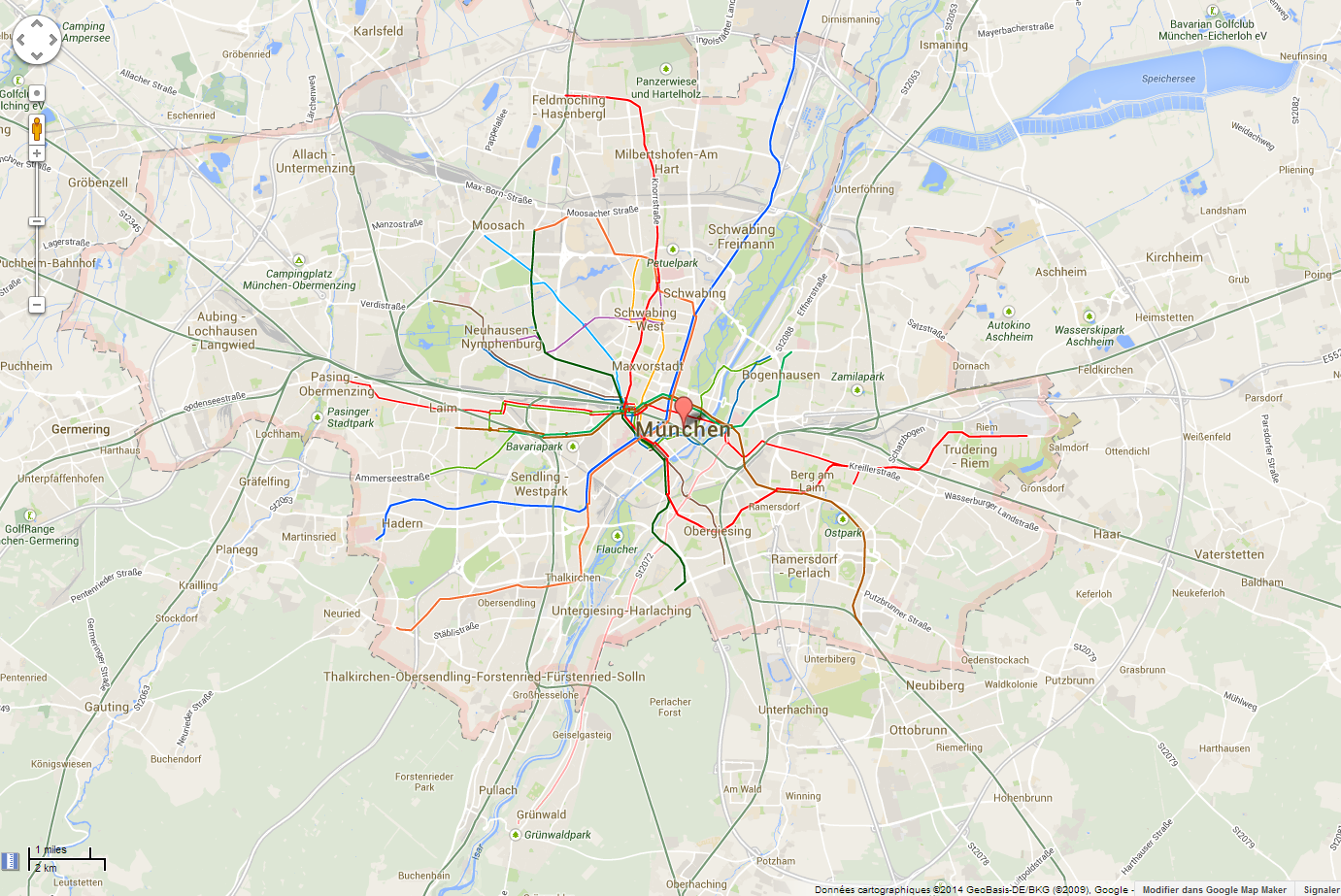 We notice a very well-developed and far-reaching rapid transit system. Including stadtbahns, the half-tram, half-trains the Germans use to provide rapid transit to suburbs (the dark green lines). That way, even suburbs further out are still linked with flexible and decent rapid transit to the city, making the car not essential to traveling in the region.

This is why only 37% of trips in Munich are by cars. This represents a very balanced level between private vehicles, transit and active modes of transport (walking and biking).
Posted by simval84 at 7:30 PM