Indeed, speed is vital for transit. Not only relative speed to other modes of travel as speed is probably the greatest factor to determine what mode of travel people will opt for, but also absolute speed, and for a simple reason: the cost of transit is directly impacted by the speed at which they travel. That is because a major part of the cost of transit is the driver, and he is paid by the hour. Furthermore, the slower each vehicle goes, the more vehicles you need to buy to be able offer the same capacity.

I know it is evident for most people who read this, but let me explain in detail through an example.

Let's take a given bus route:
Let's simulate this for 3 hours of the peak period. 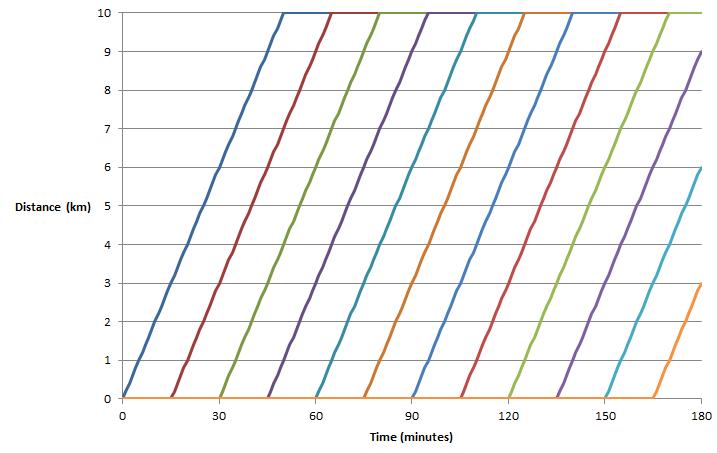 The result? You need 4 buses instead of 3, as at the worst time, you will have 4 buses running the route at the same time, you will also require 8,85 vehicle-hours of running time for buses. In short:
So just being 20% slower has just increased costs by around 25% and may increase ticket prices by even more than that if the slow speed gets people back into cars (and buses have to self-fund). The problem is evident: transit needs to be fast to be cost-effective, if transit is slow, then it is going to be unattractive and very expensive.

Overall, in this case, the cost of the transit service in relation to speed can be represented the following way:
In practice, the effects of faster service are probably not as pronounced because of layover time between routes for bus drivers and the like, but the dynamic is still there.

This is likely what happened to old streetcars. When they were introduced at first, roads were largely empty of vehicular traffic, with only pedestrians and a few horse-drawn vehicles around, generally keeping to the sides of the street or to the sidewalk. As traffic speed was about 5 km/h (3 mph), ie walking speed, there was no need for signalization at the vast majority of intersections. No traffic lights and no stop sign, some cops directing traffic at a few major intersections. So streetcars in that context almost only had to stop to allow passengers to get on or get off. Even if they couldn't quite go fast, their average speed was still pretty decent. Since labor was cheap, they even had another employee besides the driver, the conductor, whose job was to collect the fare from riders, so that passengers could pay the fare after boarding and thus avoid losing time dwelling at stops.

Some sources mention an average speed of 10 to 12 miles per hour (16 to 20 km/h) for streetcars in the US in the early 20th century (Source and source). Though it doesn't look that fast, take into account that the average speed of buses in New York City nowadays is 7,5 mph (12 km/h). In Montréal too, the average speed of buses in Montréal during the peak hours (when most people take transit) is about 12-13 km/h, around 7-8 mph. Despite nearly 100 years of technological advancement, transit is slower than back then.

Though data is scarce on the early 20th century (at least as far as I can find on the internet), most sources mention growing congestion as more and more cars came on the road. Traffic lights and stop signs started appearing in the 1910s and 1920s to deal with the higher vehicular traffic. These signalizations, though they ordered traffic, also had the effect (and still do) of causing delays on arterial roads. Even a well-programmed traffic light at a relatively little used intersection will frequently incur around 10-20 seconds of delay on average to cars passing through. So if you have one traffic light every 500 meters (around a third of a mile) on a 10-kilometer trip (6-mile), you will likely lose 3 to 6 minutes at traffic lights. So if you used to be able to do that length at an average speed of 20 km/h (12 mph), now you could have seen your speed actually fall down to 16-18 km/h (10-11 mph).

I imagine visually this is how traffic should have evolved:


In old sources, often streetcars were blamed for congestion, due to the windshield perspective of those who used to have access to the media and the attention of the powerful. This is for a simple reason: most streetcars actually had tracks in the center of the street, in the left lane, the fast lane. How did passengers board? Well, at first, passengers waited in the street, forcing cars to slow down not to hit them. As traffic became more ordered, here is how it worked, and still works in Toronto:

Is it any wonder then that car drivers seethed at the sight of streetcars that blocked two lanes of cars when allowing passengers to board or alight? And why car drivers were so receptive to arguments for replacing streetcars by buses?

So, anyway, some posts back, I made a graph about the average speed of transit lines depending on how many stops they had to make and their maximum speed. I will re-use this to illustrate the effect of congestion on streetcar lines.

First, the original situation where streetcars largely had to stop only for passengers and faced little to no congestion to slow them down.
Now combine this fact with the earlier fact about how slower transit is more expensive to run for the same capacity. This means that an operator in this situation has a choice of either reducing the capacity of transit lines by 30 to 40% or increasing the number of vehicles by 50% to maintain the same capacity. No matter what, it results in an increase of costs per passenger of at least 50%.

More importantly, this thought experiment reveals that streetcars, far from causing congestion, were actually a VICTIM of the congestion caused by cars. Car congestion increased transit operating costs and lowered their average speed, making them more expensive and less attractive at the same time.

Streetcar companies, that used to be profitable, started requiring influx of public funds to stay afloat, many were bought by cities. Even when the streetcars were replaced by buses, it didn't help matters, and transit companies, now public, often require up to 70% of funds to come from public money and not fares. A result of three factors:

The lesson we can take from these facts and what happened to streetcars should be clear: in highly motorized cities, transit requires reserved right-of-way to protect itself from congestion. In some small cities, maybe they don't need it yet, but if they plan on growing, they should do it as quickly as they can, because when congestion becomes common, taking any space away from cars will be more and more politically contentious.

This is a lesson I think developing cities especially need to take to heart. As people start being able to afford motorbikes or cars, they risk overwhelming streets and causing monstrous congestion. When this happens, bus services running in mixed traffic will suffer most, because the speed reduction will result in transit companies either requiring massive subsidies to keep running, or going bankrupt, thus pushing people into private motorized transport. Even worse, those who will not be able to afford motorized transport will have to walk in congested roads where they are likely to be hit, wounded or killed. Congestion may also choke cities and lead to good jobs and wealthy residents fleeing to sprawl, copying the North American mode of development that left desperate poor people in urban areas.

Considering this, I think developing cities need to implement transit-only lanes and BRT quickly, because it will only get harder to implement as more and more people get motorized. BRT exists here to essentially protect buses from the congestion that cars and motorbikes create and safeguard transit riders' access to an acceptably fast and safe form of transport. If buses are left in mixed traffic, transit use will simply evaporate over time.

For developed cities, modern tramways on their own ROW or even better, grade-separated LRTs and subways, should be preferable, because their lower labor requirement means they will cost less in the long-term and be more attractive to people who already have cars. But even bus lanes to go around congestion will do a lot of good in order to provide for more affordable transit that is more attractive to people.

Eventually, developing countries should also invest in rail, I think, for as they become richer, labor will become more expensive and the buses that used to be cheap will become more and more expensive. Rail can avoid that issue, and also provide for much higher capacity for less space.
Posted by simval84 at 9:58 PM