So I read an article recently about the "Soviet City", (http://www.newgeography.com/content/004830-looking-back-the-ideal-communist-city) which made a link between the Soviet city planning and the urbanist movement. The author noted that, like urbanists, Soviet city planners were focused on walkability and transit, and sought density, building big concrete apartment blocs. She said that they were imposing their vision in an authoritarian manner, contrasting this with North American suburbs, that she describes as emerging organically from the desires of consumers. The whole piece is meant as a warning against urbanists not to impose their vision on an unwilling population.

You may consider this post as a rebuttal. I believe that despite the author's claim, both North American suburbia and Soviet suburbs (yes, they were suburbs, not cities) share many basic design points.

First similarity: both were planned from above and imposed on the population

The most glaring error of the text is that it supposes that North American suburbia is a spontaneous emergence from consumer preferences. The reality is very, very different. Though the United States as a whole likes to boast of capitalism and property rights, in terms of development policy, it is one of the most controlled countries in the world.

American elites in the middle of the 20th century were clear about their vision for the future of the country. The American Dream would be about owning a house on a plot of land, with cars to travel around, like a miniature version of the estates and villas of the rich. Renting was out. Mixed use was out. Multifamily housing was out... even outright "un-American" according to some of these elites.

As a result, American cities and governments adopted strict policies to make almost anything that wasn't suburbia was harder and more expensive to build... if not outright impossible.

Cities implemented Single-Family Detached (SFD) only zoning, forbidding anything else but detached housing in most of their area. Any attempt to convert houses to multifamily housing would face quick backlash from the defenders of this zoning. Regulations would mandate huge parking lots to make sure traveling by car was easy, even if they made walking, biking and transit very inconvenient.

The Federal Housing Administration offered mortgage insurance only to places that fit the standards of suburbia. Redlining, where whole areas were denied government-backed mortgage insurance, is often associated with race, but it was also singling out urban areas, based on ideas regarding urban planning that are opposed to best practices today (mixed use was wrong, street grids were wrong, cul-de-sacs were great, etc...).

Advantageous fiscal advantages were put in place for homeowners to make paying back a mortgage cheaper than renting.

Not only that, but State governments would destroy entire neighborhoods to run highways through cities to allow suburbans quick automobile access to entire cities, without which the suburbs would have been unable to sprawl farther as distances (in minutes) would be growing too great to support the sprawl. These highways would be free of charge to use, subsidizing suburbs that depend on them by using tax money from other areas. Transit would choke faced with this subsidized competition.

Canada has a bad tendency of doing whatever big brother America does, so much of these policies were imported North.

Of course, in a time of great population growth (the babyboom and mass immigration), when you destroy urban housing for "urban renewal", ban new urban housing from being built and subsidize sprawl, it is no surprise that sprawl is what gets built and where most people start living in. Whether or not there really was consumer preference for this type of housing, we will never know because of the imposition of that model and its subsidization. Price is part of consumer preference, an essential part of it, by subsidizing a certain lifestyle and increasing costs of other lifestyles, you change what consumers will opt for.

If you only look at buildings, there seems to be no similarity between North American suburbia and Soviet suburbs.
However, even if the Soviet example is very dense, very tall and is multi-family housing, that alone doesn't make it an urban form of development. In fact, the Soviet example is an accomplished case of "tower in the park", Soviet suburbs are often full of greenery with blocs facing trees rather than each other. Just like the detached single-family homes of North America are separated by distance and often use trees to isolate themselves from other buildings and the street. 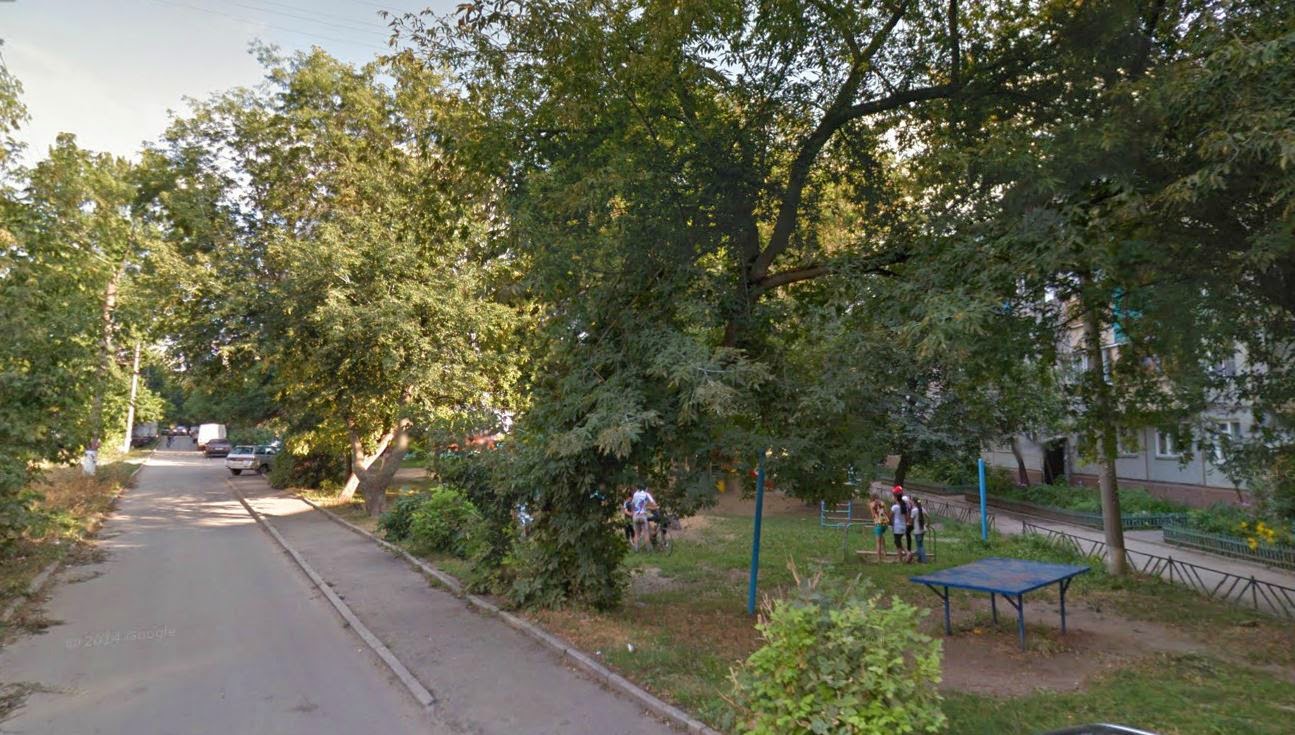 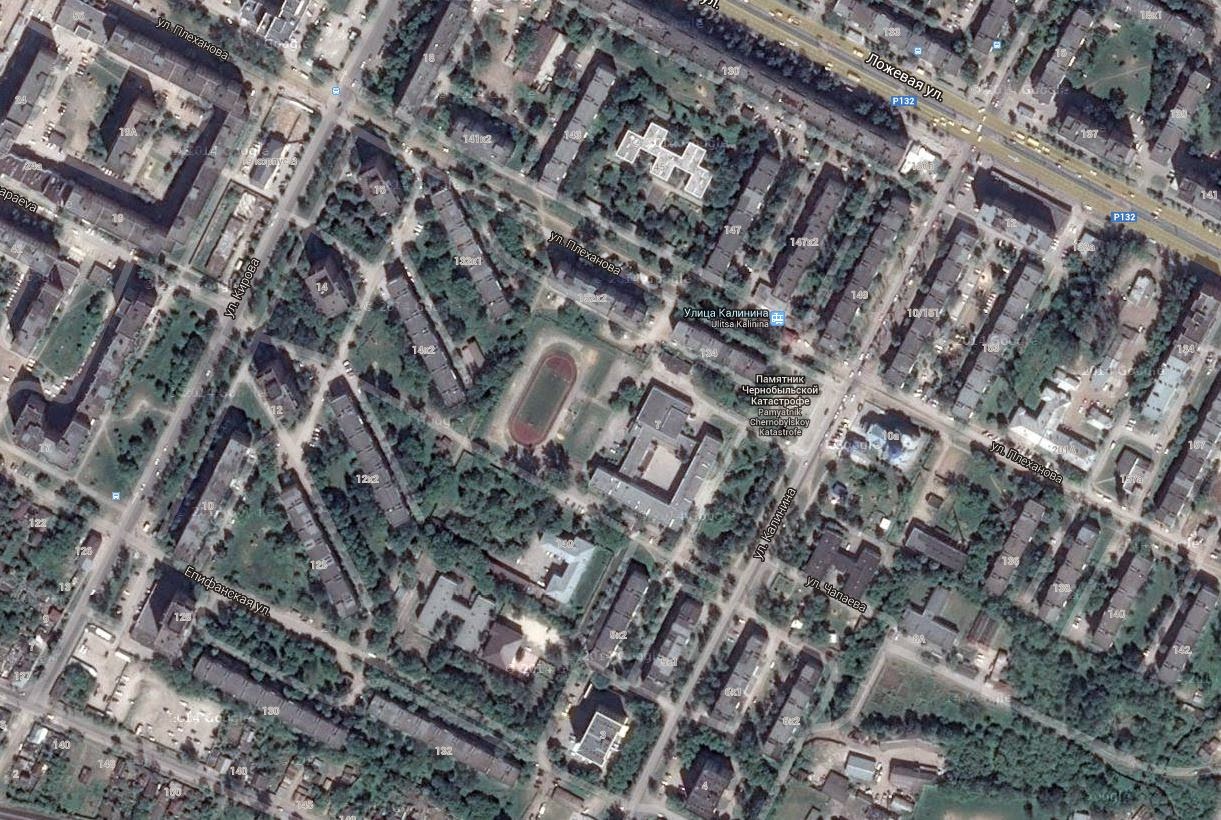 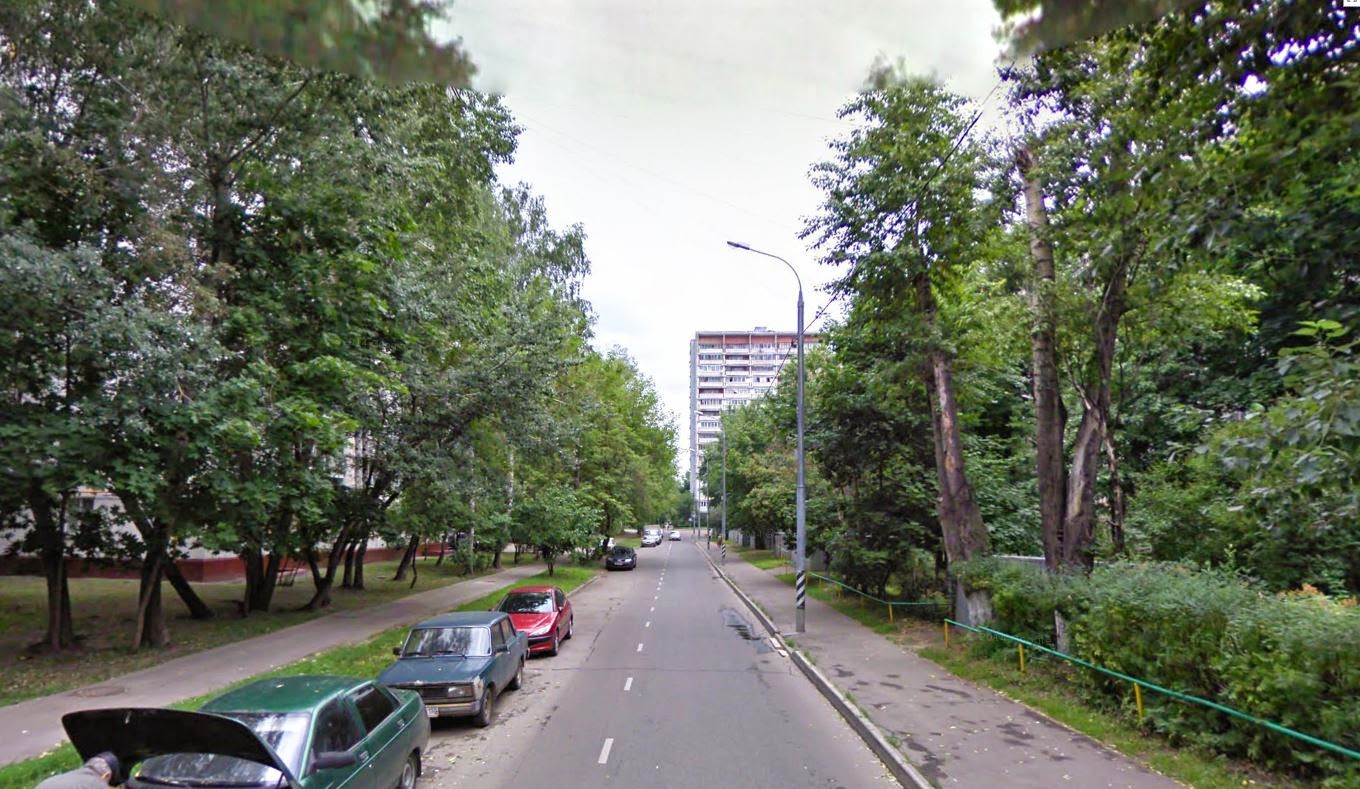 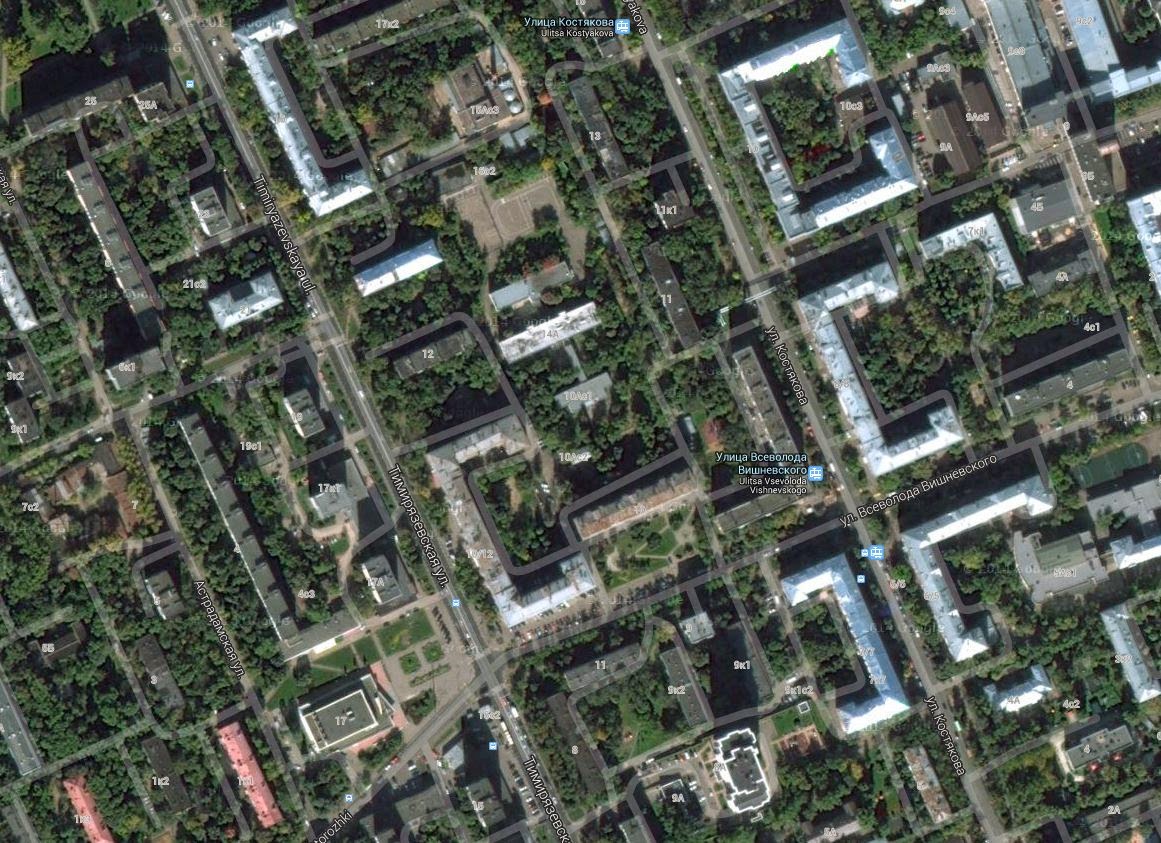 Both the single-family home of North American suburbs and the apartment blocs of Soviet suburbs are designed to be isolated, to provide a feeling of being close to nature, not to a city. In order to achieve that effect, they use green buffer spaces next to the building on its lot so that other buildings are reasonably far away. In fact, both house and apartment building share the same basic design of a building in the middle of a lot, kept at distance from other buildings:
In fact, take a typical villa-type SFD, stretch the lot to make it bigger then build one big building that is essentially homes built side-by-side and one over the other, and you have the Soviet apartment building. In both cases, some kind of isolation is the result, as the units over the ground floor are effectively isolated from any activity on the street. As opposed to single-family homes built with only small setbacks and low-rise apartments with balconies built next to the street, which are less isolated from the street.

Green buffers are used to destroy the urban fabric, meaning the appearance of a dominance of built areas in cities, of buildings forming a coherent whole, enclosing the street and public areas (bringing buildings in contact with the street). By creating these gaps between buildings and filling them with greenery, the goal is to make "natural" landscape dominant, as if one was walking in a park or a forest, not in a city.

Note that this use of green buffers isn't an efficient use of space, not at all. In the case of SFD homes, it represents a huge waste of space that reduces density to a minimum and forces all trips to be motorized. Only mass motorization and the subsidization of high-speed roadways can allow such waste of useful land to go on. And indeed, US suburbs MANDATE that waste. Residents and pro-sprawl planners react with holy terror when the rules that impose green buffers (mandatory setbacks, minimum lot sizes, etc...) are questioned, because they know that without them, many lot owners would seek to make the green buffers productive by building on it, and it would raise the value of land, making the big estates they like more expensive.

In the case of the USSR, I think it goes without saying that this waste of land was also mandated by the government. However, as the USSR was much poorer and planners knew that they would need to rely on walking and transit to move around their population (another nail in the coffin of the canard that cars are cheaper than transit), they still insisted on density, resulting in very tall buildings full of small housing units. That way, they could match the older, dense neighborhoods while maintaining the green buffers. But while they managed to salvage spatial efficiency by doing so, they sacrificed housing affordability as tall buildings are more expensive to build, even the cheap, mass-produced stuff they built. To compensate, they made the housing really, really cramped. If your housing costs twice more per square foot to build, just build units twice as small, right?

It seems to me that everywhere green buffers are abundant, it has been mandated by government in some way. Huge setbacks and distances between buildings is simply not an economically efficient use of space, it is wasteful, so the only way to make sure it remains frequent is to require it.

What does a city that doesn't mandate green buffers and allows individuals to do what they want with their property looks like? Look to Asia for the answer (but not China, which is also planned like the USSR, even if it's less "tower in the park"-y in some places). People are probably getting tired of me bringing up Japan, so here are:
You can also look at old European villages, which have a lot of similarity with Asia. In any case, these loosely regulated cities are completely different from both North American suburb and Soviet suburbs. They have strong urban fabric and could even be called buffer-less cities. Motivated by economic reasoning, they have created dense cities where buildings are built very close to one another, which only rise to the skies when the demand for it is actually there.

So I hope that I have made a convincing argument that North American and Soviet suburbs actually both originate from modernism that rejected traditional cities and wished to tear apart the urban fabric, using green buffers to isolate buildings and people, and try to create the impression of living in a park or a forest rather than in a city. In both cases, the government used different tools to impose the vision of their elites on their population, often until the population just figured this was how things are and always will be. So they are two flavors of the same idea, not two diametrically opposed ideas, and the differences there are were largely dictated by transport needs and wealth level.

I'm not saying that such suburbs are terrible and should be banned. Some people do crave the isolation they bring about. I do not resent their choices. However, I don't think that these preferences should be imposed on people nor subsidized by having everyone pay for the transport infrastructure this kind of development requires to be viable. The idea that North American suburbs emerged organically and represent consumer preferences perfectly also needs to be confronted. It is incorrect, it is a myth, and the fear of development deregulation by promoters of sprawl shows that even they acknowledge that without these regulations imposing sprawl and the subsidies distorting price signals, a lot of people would opt out of sprawl.
Posted by simval84 at 9:32 PM