Porches, front yards and the (North) American way of life

So last weekend was my favorite holiday: Halloween. The well-known celebration of Halloween originated in the United States, a combination of many different influences, and it has migrated to Québec by the time I was born. As a kid, I loved going trick-or-treating, walking the streets, looking at houses with fake graveyards in front of them and the like. It got me thinking about the intersection between the celebration of Halloween and the built environment of North America.

If there is one thing that defines North American architecture, especially in single-family areas, it is an openness of design. Traditional urban houses in much of North America is open to the street, with plenty of wide windows, porches and details to make the house look good to the street. Front yards have also been common for a century or more, and these are rarely fenced-in, and even when they are, they remain largely visible from the street or sidewalk. These front yards used to be of moderate depth before cars came around, but they have gotten deeper as time has gone on.

This openness of design can be contrasted with many European countries who have buildings with plain façades built right on the property line (note: the apparent density may be deceptive, in many cases, houses have huge back yards so that overall density may be only 20-40% higher than traditional single-family areas in North America)...

...or even if they have significant front yards, they often use fences to hide the front yard from the street.

(Note that some countries in Europe have more of an intermediate position like the Netherlands or England and that newer suburban areas often have front yards, even if they're usually fenced-off, or walled-off)

If you look at the images contrasting the North American and European cities, you can notice one major difference: in the European cases, there is a very clear break between public and private realm, the public realm is the street and sidewalk, owned and administrated by the city, and just outside it, walls, either the façade of the buildings or walls built at the limit of the property to make the front yard more part of the private realm than of the public realm.
In North America, the openness of housing design and the presence of unfenced/clearly visible front yards introduces an entirely other part of the public realm: privately owned land that is nevertheless designed to complement the public realm, to serve as a public display of the owner's personality. This means that shaping the public realm is not just the duty of the public authority through the city, but also of the community, of the individual residents who take care of their front yards, porches and other publicly visible elements of their dwelling.

This specific communal space in the public realm in North American societies can have a strong impact on community life and on the manifestations of cultural events. Indeed, without that space allowing a public showcase of each household, it is hard to imagine Halloween and Christmas proceeding as they do currently, with decorations that reshape the public realm temporarily for the duration of these holidays, all without involving the city.

People in urbanist circles sometimes look down upon front yards as meaningless space wasters, reducing density while not providing a larger private area like a back yard. But I think that this front setback does serve a purpose, even more than merely providing a buffer to protect residents' privacy, and that it defines a certain North American way of life to which many people are emotionally attached. I'm not saying this particular way of life is really superior, it has its good points (fostering a certain community spirit and involving people into contributing to shape the public realm) but also its drawbacks (inciting people to consider other resident's front yards as being semi-public, legitimating by-laws to control what one may or may not do with it or inciting them to build social pressure to conform to certain standards).

But if we want to get people to accept a drive for more walkable, urban areas, I think we have to account for this preference and try to conceive of ways to reconcile higher densities with this approach to communal construction of the public realm through front yards and setbacks. That is not necessarily impossible to achieve, traditional American cities, even today, frequently have residential densities of 50 to 100 people per hectare (20 to 40 per acre) with single-family homes and duplexes, and Montréal has some neighborhoods where residential blocks have densities of 150 to 200 people per hectare (60 to 80 per acre) while still having small front yards and balconies for units above ground. 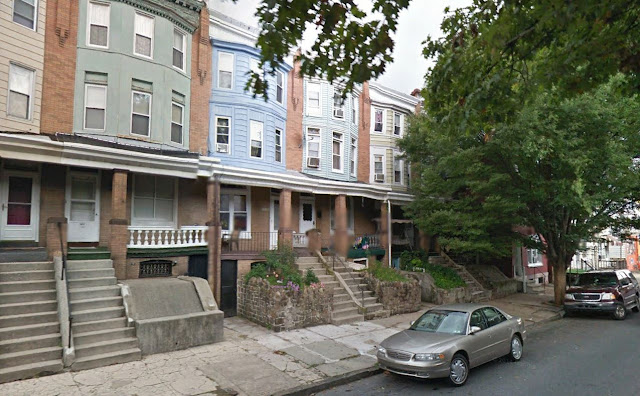