In order to build environments that are human-scaled and friendly to pedestrians, one of the first things we tend to favor is narrower streets. But the reality is that proximity is desirable to shorten walking distances, but not the only thing that matters.

Here is an example of two narrow streets, one in Québec city, the other in Bruxelles.

So, these two streets are really narrow, but how do they feel to you if you were asked to walk there? For me, these are pretty terrible places to walk, and not a place where I would want to hang around. In fact, they feel very claustrophobic to me. So what's the problem here? They are narrow streets after all, like we often ask for.

So what is it that makes someplace comfortable for pedestrians? Is it simply the space from building-to-building, the wider it is, the better it is? Let's take an example, very wide street with a lot of space between buildings.
Okay, so that's not it either. This is even worse than the previous two. So what's the deal here?

I think that the main factor here is width, but not street width, it's the width of the pedestrian corridor and pedestrian-friendly areas.

In the two first cases, this corridor is extremely narrow, it's essentially two sidewalks of about 1,2 meter (4 feet), stuck between walls and parked cars. The parked cars are important here, some urbanists like them for the fact that they make a barrier protecting pedestrians from moving cars, but they forget that they serve another purpose: they make a barrier to pedestrians, telling them to keep to the sidewalks, that on the other side, only cars are allowed. In other words, they represent a permanent claim cars have made on the street, they represent a frontier between "car space" and "pedestrian space". You will also often notice a propensity of cyclists to bike in the pedestrian space unless there are clear counter-indications (like bike lanes) in the presence of long lines of parked cars.

These streets were likely fine prior to the car, but once they arrived in great number, 75% of the street were given exclusively to cars, transforming comfortable walking areas into tiny corridors where it's hard to walk two across, stuck between the walls of the buildings on one side and a wall of cars on the other.

What would they have looked like had cars not taken over the street permanently through on-street parking? Probably a bit like this:


In the Japanese case, the walking corridor is very wide because there are no sidewalk nor parked cars to indicate to pedestrians that they don't belong there. So despite buildings being very close to one another, even closer than in Bruxelles and Québec city, it's still a comfortable place to walk because to pedestrians, their corridor is extremely wide as there is no place off-limits to them.

Another aspect to consider is what is next to the pedestrian on the outside. Just like the presence of parking lots incite car drivers to drive faster even if the street they are on is narrow as they feel that the area just outside the street is still part of their corridor, the presence of lawns, porches and semi-private areas is beneficial for pedestrians, who consider these areas as part of the pedestrian corridor, or at least as a pedestrian-friendly area.

In the first two cases, Québec City and Bruxelles, there is no such area, the sidewalk ends with the walls of the houses, and the proximity between pedestrians and the private area inside homes means that windows will likely be permanently shuttered, because who wants passer-bys to be able to see you inside your home? So people will take steps to protect their privacy by transforming the facade of their homes, despite the door and the windows, into blank walls.

Now here is an example of places with setbacks:
The case of the Plateau-Mont-Royal is interesting because of the setbacks of the buildings to the sidewalk. To save space, builders took the stairs to upper-floor apartments outside, characteristic of Montréal buildings (and copied afterwards in other cities in Québec). The setback also provides some privacy without shuttering windows and allows for the building of porches and balconies, which most Montréal walk-ups have. Note also how big the sidewalks are. They are maybe about 3 meter-wide at their widest (10 feet), so wide they planted trees on them.

For pedestrians, this front yard, though it is private property, is still somewhat welcoming to them because it is an human-friendly area. There may also be interactions between people in these areas and the pedestrians on the street. Which helps make streets living areas instead of just places of transit from one place to another. Note also that in commercial areas, if the facade of the buildings are windows and allow people to look into stores and restaurants, then these private areas are still considered human-friendly.

Here is a more recent street in Montréal that is a modified version of the Plateau, losing much of its attractiveness:
So you have 2-3 story buildings like on the Plateau. On-street parking is still very present, exterior stairs and balconies too. Yet, this is far from as pedestrian-friendly. The major problems here are that:

1- The sidewalks have been made much narrower in comparison to the Plateau, reducing the pedestrian corridor
2- A lot of the setback is used by driveways leading to garages, which is not an human-friendly buffer zone
3- The street has been made much wider
4- There are no trees 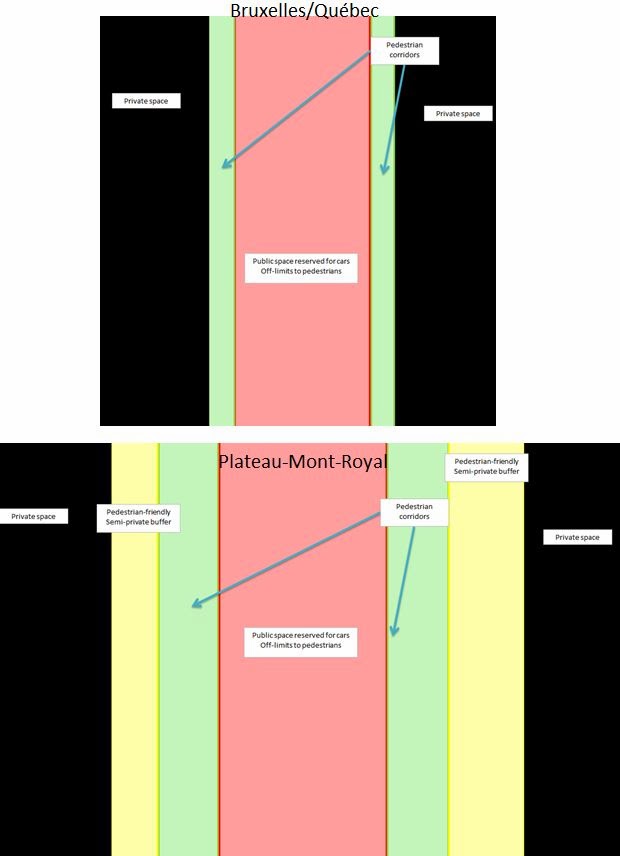 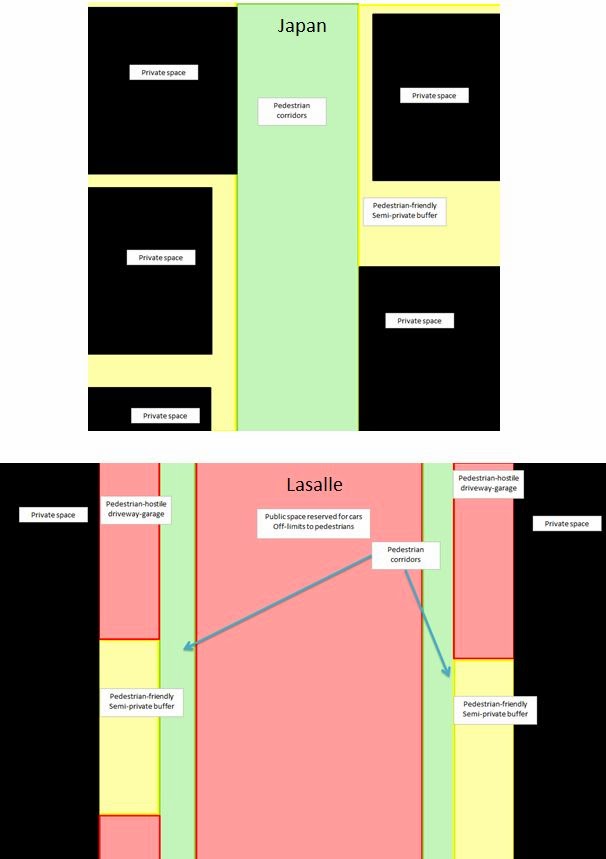 What you want is to maximize the green space. Then, to make sure that as much of the rest of the area is yellow, to reduce the red to a minimum.

This also reveals an issue with the typical suburban model of a single-family detached home with a driveway in front. The regular one with a very wide house is not much of a problem. Well, the density is atrocious and no one is going to walk anywhere because there is no place reachable by walking, but otherwise the walking environment is not necessarily bad. But if we try to densify these areas by making lots narrower, we come to a big problem: 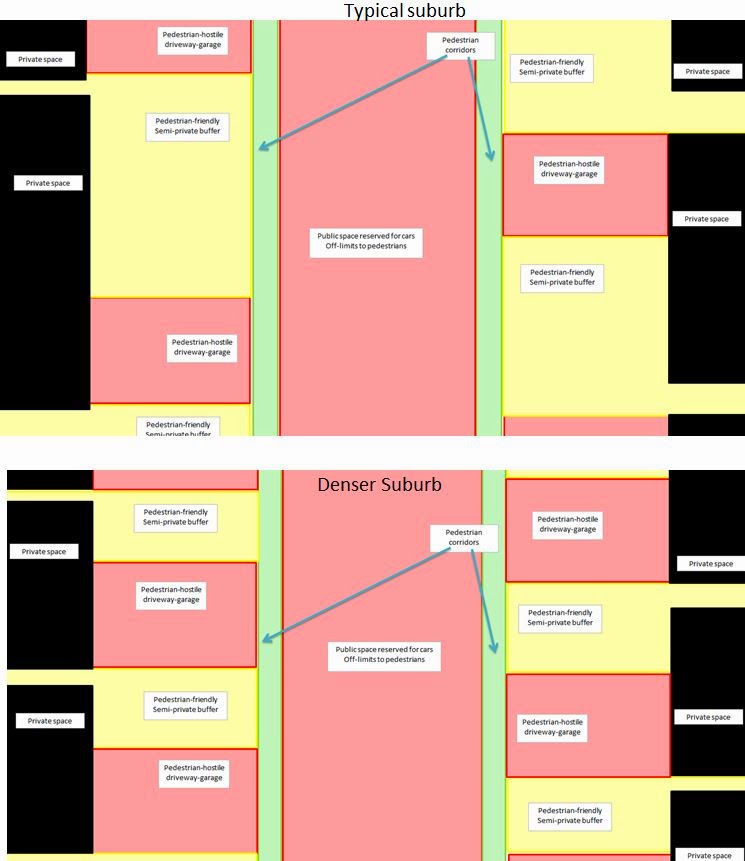 Note we are losing the yellow space, the pedestrian-friendly buffer, replacing it with pedestrian-hostile driveways and garages? We're making the area less and less pedestrian-friendly as we densify. That's probably why New Urbanists want to remove driveways to the alleyway. The alternative is to make driveways smaller or less intrusive, like the Japanese do, to make the driveway seem to be part of the front yard.
Posted by simval84 at 5:04 PM