As a quasi-follow up to the previous article about height and zoning, a comparison, between Toronto and Montréal, which despite being two Canadian cities have followed very different development models.

Montréal's housing stock is overwhelmingly made up of what is called a "multiplex", essentially duplexes, triplexes and more, apartment units built over each other in a same building. The main difference between them and apartment blocs as we see it is that:
1- They are 2- or 3-stories high
2- There are multiple doors to the outside, generally one per apartment

I'm not joking when I say it is overwhelmingly represented, we have square kilometers of the stuff, as the following picture I took from Mount Royal demonstrates. Basically all you can see there is multiplexes:
(All images are clickable for larger formats)

When Montréal started growing with the first urban migration, the multiplex was the building that people decided to build. And one very particular characteristic of Montréal housing is the exterior staircase. 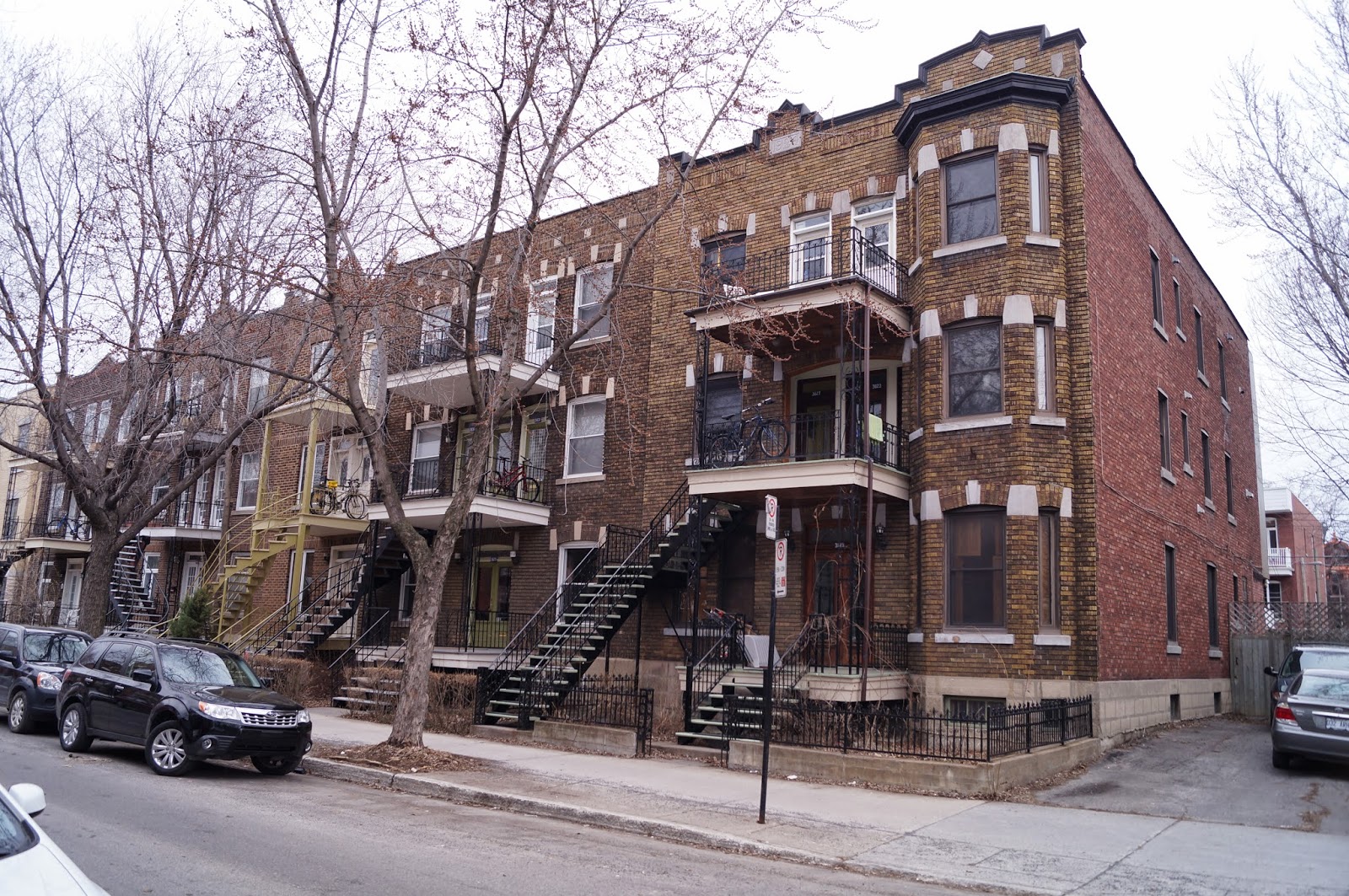 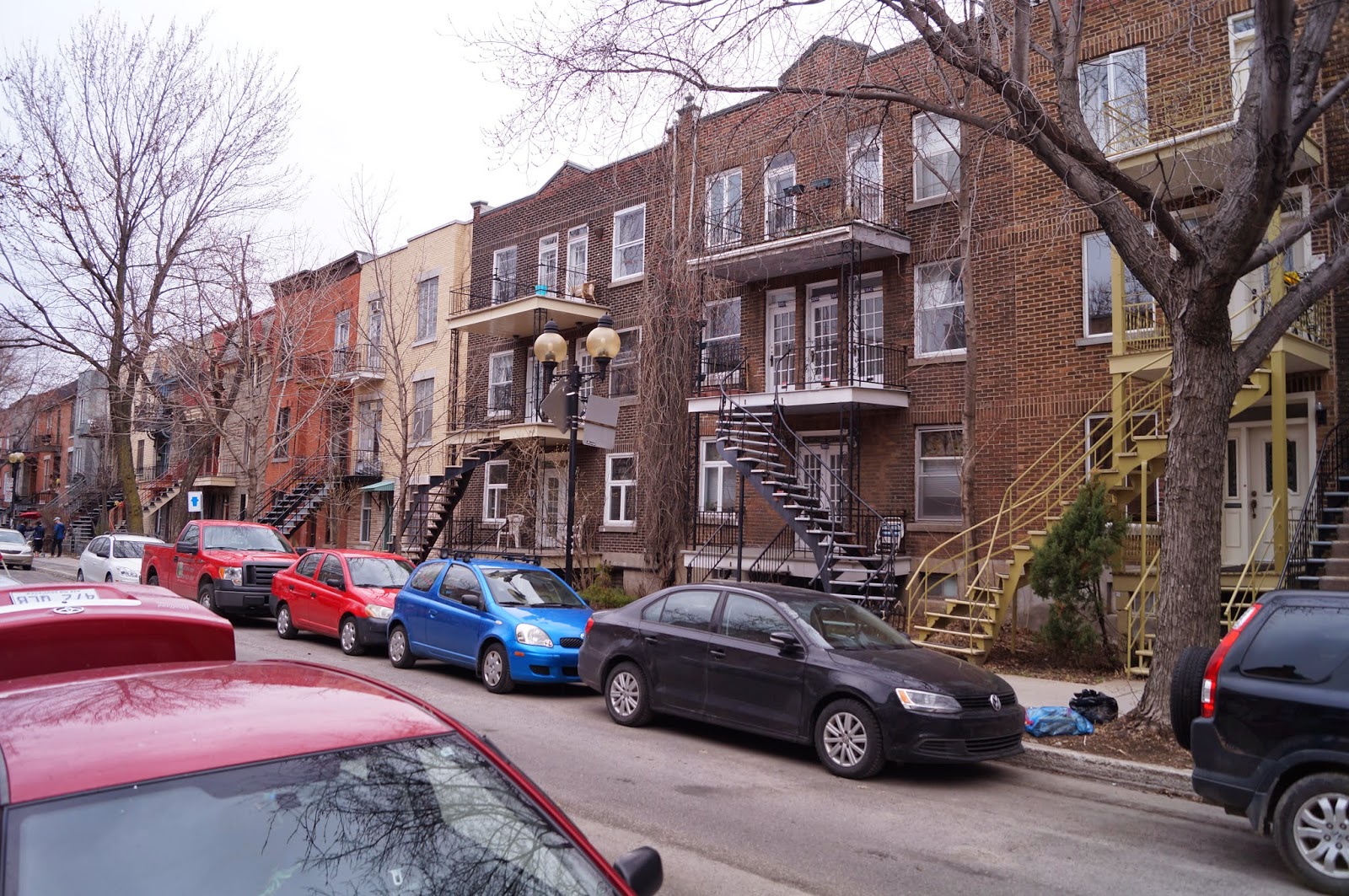 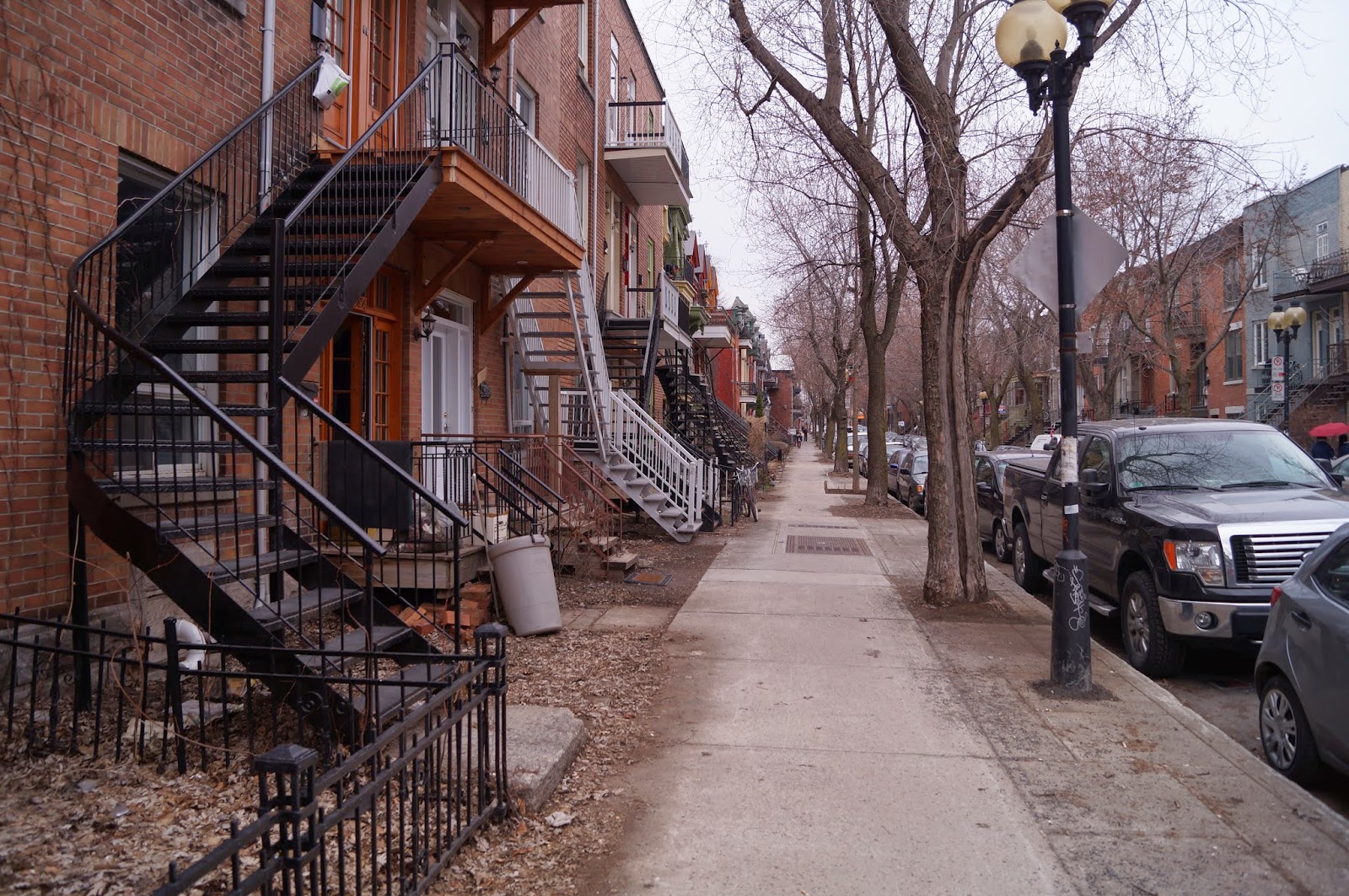 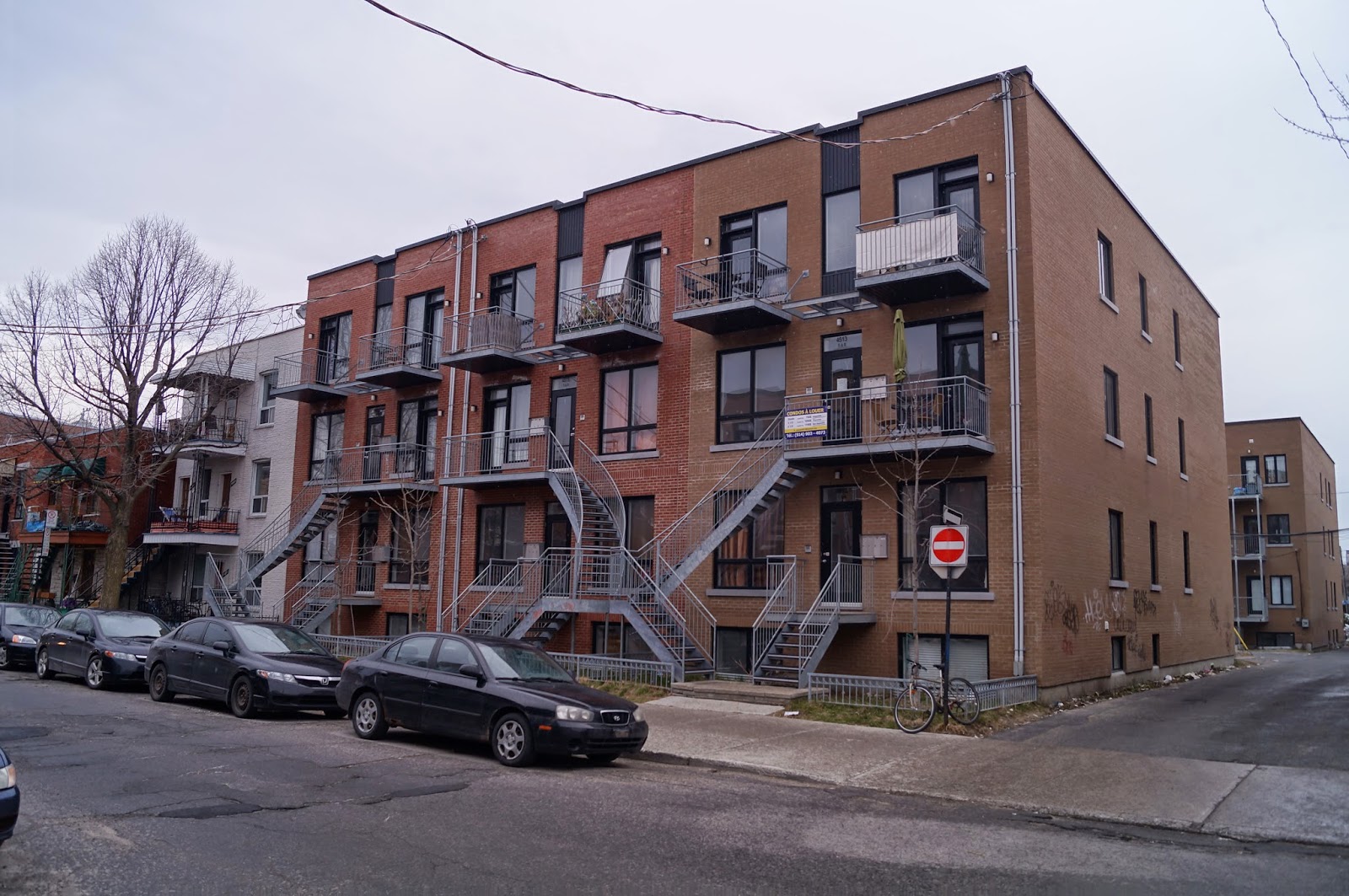 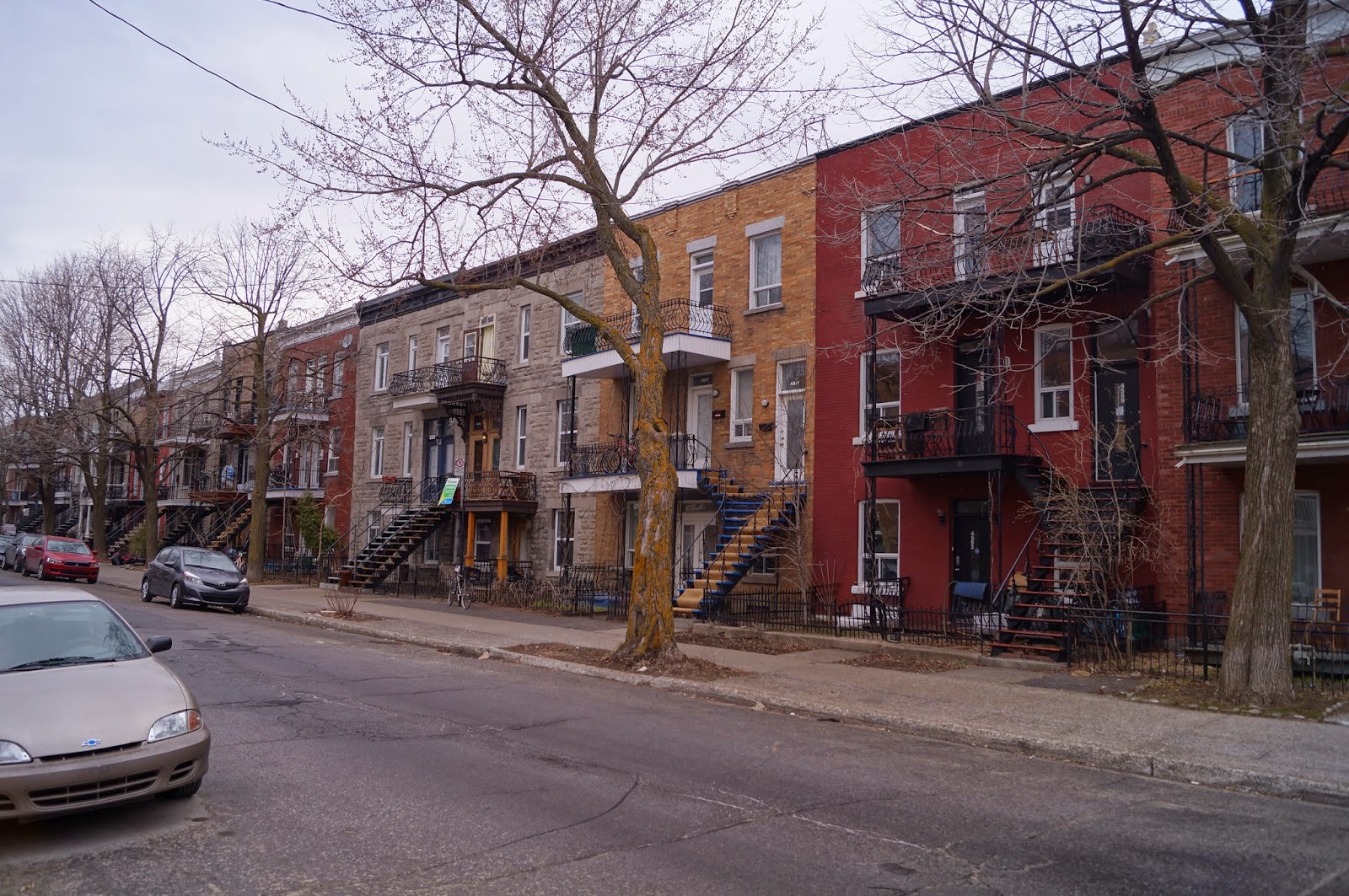 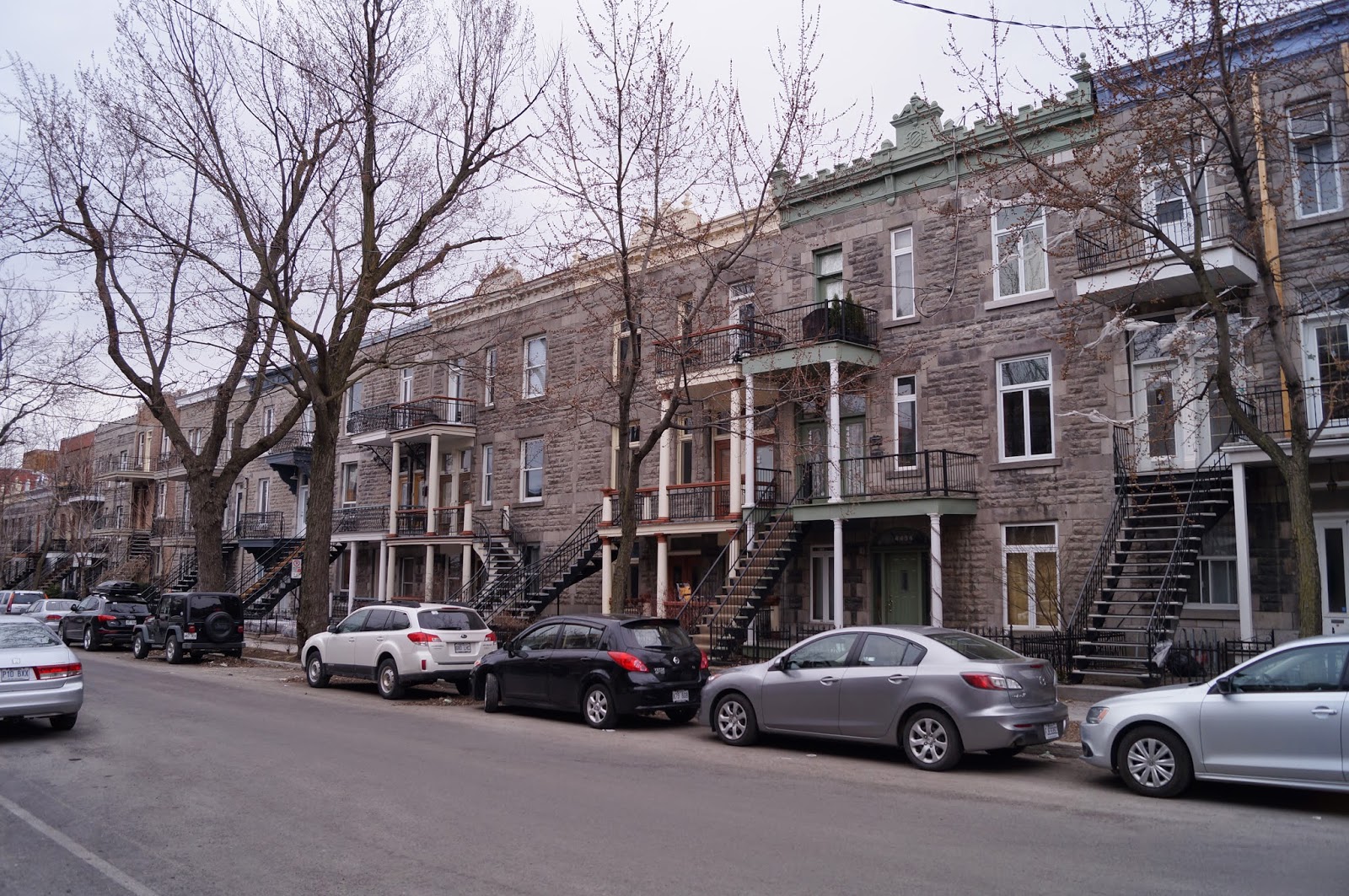 These photos run the gamut from poor housing to rich housing, from old buildings to new ones.

Tourists often find this astonishing, considering how we have ice and snow 5 months a year that residents need to climb up and down metal staircases many times each day. The reason for them is not well known, I've heard two theories.

The first is that the city government wanted to avoid having buildings too close to the street, so they mandated setbacks, which reduced the amount of each lot on which buildings could be built. So to save space, the builders chose to take the stairs to apartments outside of the building.

The second is that builders wanted to reduce communal interior space so as to reduce the amount of useless space they would have to heat during the winter, so with stairs to apartments being outside, only the apartments themselves had to be heated during the cold months.

Anyway, we're stuck with them, and we're in fact even proud of them as a defining characteristic of our city.

Anyway, that is what most of Montréal looks like, blocks upon blocks of multiplex apartments, with a variety of apartments in each, some bigger, some smaller.

The towers of Toronto

Toronto is a more recent city, and it shows, as the traditional North American housing dichotomy of single-family homes and huge towers is in full swing there. In fact, on a trip there, as someone used to Montréal neighborhoods, I was shocked to see the dearth of low-rise apartments in Toronto. Here is what it looked like from the CN Tower:
Okay, it's hard to see these houses that are 1 or 2 kilometers away from the towers, so I'm going to use Google Street View to show what they look like. 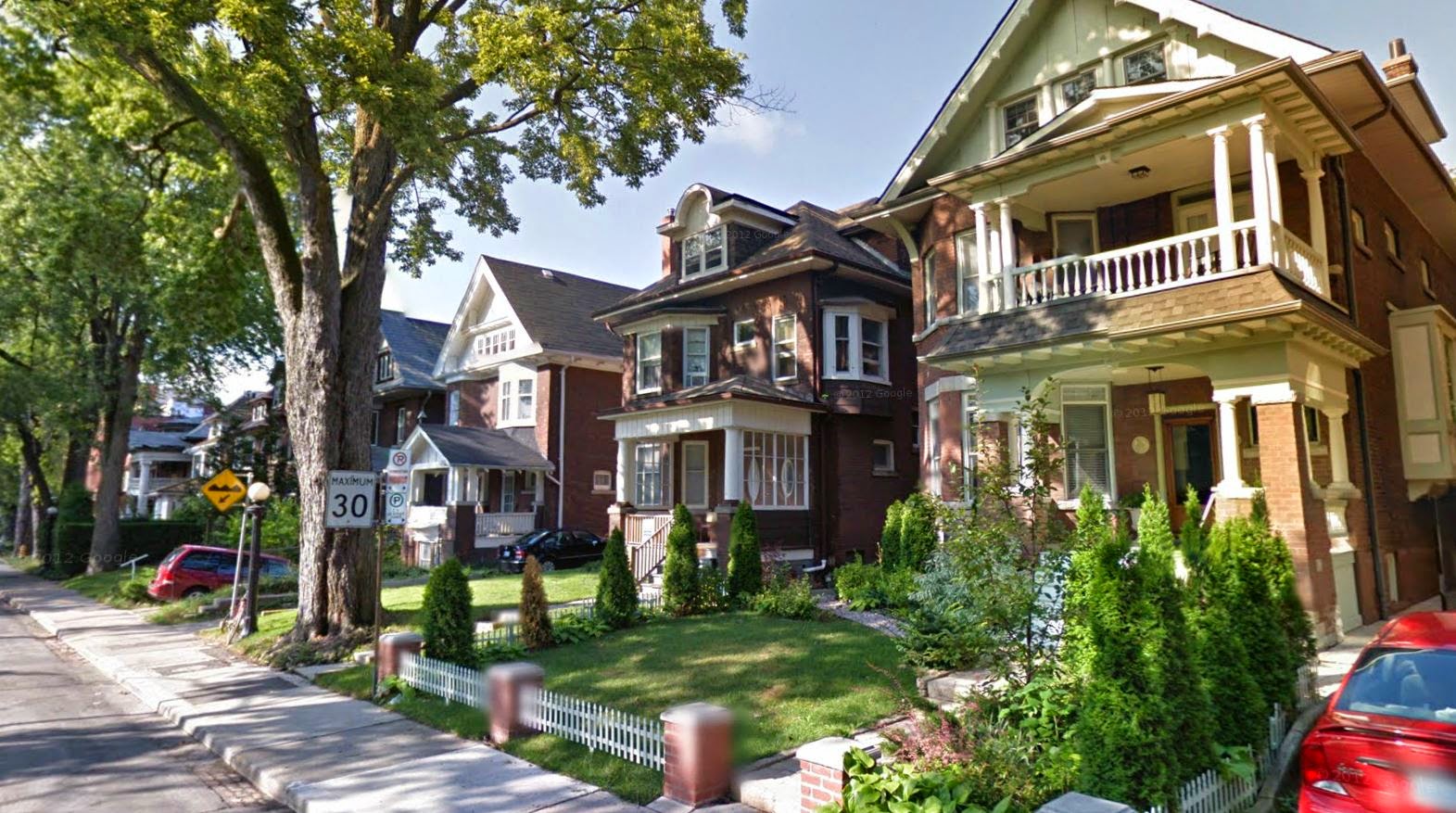 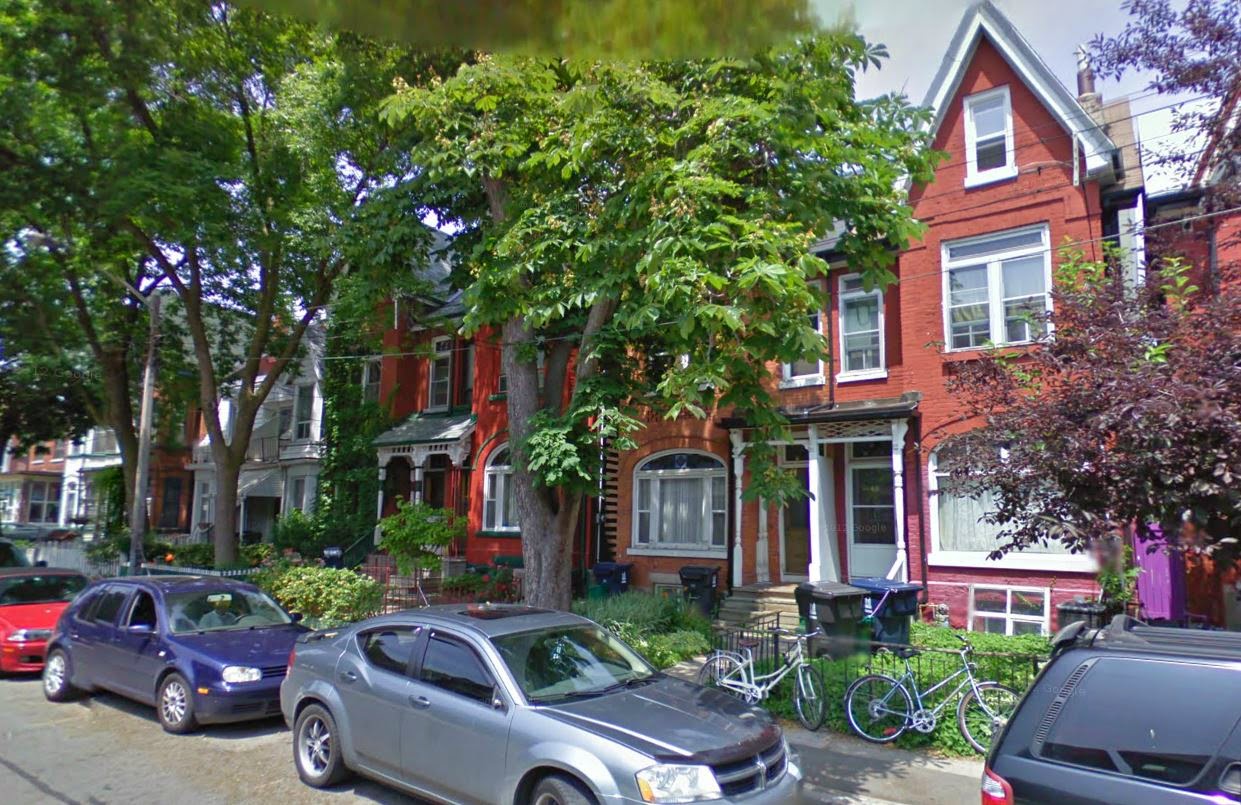 Now, to be fair, for single-family homes, detached or semi-detached, they are pretty dense. 25 to 35 units per hectare. But this is still very far from the Montréal multiplex neighborhoods that have 100 units per hectare and more, and up to 20 000 people per square kilometer.

So Toronto has really little middle-ground in terms of housing between these houses and the condo towers closer to subway stations and to downtown. Low-rise and even mid-rise apartments are rare.

Fortunately, I found some numbers to back me up if some accuse me of stereotyping. The census that the federal government does every few years also counts the types of dwellings, and they make a fortuitous difference between low-rise apartments and mid-rise and high-rise apartments. So here is what the housing stock looks like in Montréal, Toronto and Vancouver, for fun.

So I wasn't kidding when I said that multiplexes dominated Montréal. Add apartments with less than 5 stories and duplexes together, and they make up 72,6% of all housing units in the city of Montréal! Meanwhile, detached and semi-detached houses make up a mere 10,8% of Montréal's housing units. On the other hand, in Toronto, duplexes and low-rise apartments make up less than 20% of the housing stock, but over 40% of units are in apartment buildings of 5 stories and more, and 33,2% of Toronto's housing is in the form of detached and semi-detached houses.

For comparison's sake, Vancouver is closer to Toronto too, with very, very few low-rise apartments. There is a significant amount of duplexes, which they favor over semi-detached houses it seems. I've made a mistake in importing the data for Vancouver (my Excel is in French and uses commas for decimals and spaces for thousand separation, census data uses dots and commas as thousand separation, no end of problems for me, thanks to GRIDS Vancouver for pointing it out).

Now, both Montréal and Toronto were merged with former suburbs, so let's see what housing looks like over the entire metropolitan regions, to compare apples to apples.

OK, so including suburbs, we see a major increase in the proportion of houses, of course. But even then, multiplexes and duplexes make up most of Montréal's housing. Toronto still has a very small amount of low-rise apartments and duplexes, but even the suburbs have big apartment blocs. Vancouver seems more balanced here, largely because the suburbs, especially Richmond, have a lot of low-rise condos.

If you're curious, here's what the housing stock of the suburbs look like (in other words, the CMA houses minus the main city)
Even in the suburbs, in Toronto the amount of units in big apartment blocs is nearly the triple of those in low-rise apartments.

And does this mean that Montréal is less dense than Toronto and Vancouver? Not really. Though Vancouver's and Toronto's highest density neighborhoods have higher density than Montréal, Montréal has much more mid-density neighborhoods (7 000 to 15 000 people per square kilometer). So the population-adjusted average density for the CMA of each city is 5 400/square kilometer for Toronto, 5 000 for Montréal and 4 500 for Vancouver.

Now, why this difference? Well, either I'm obsessing over this or it's really at the root of everything, but I think the answer is zoning. Euclidian zoning is all about imposing a certain housing type on developments and protecting current neighborhoods from changing their housing mix. It's simply that Montréal, as an older city, had already begun building the next step in the typical evolution of cities (sparse houses -> dense houses -> low-rise duplexes and apartments -> mid-rises -> high-rises) when zoning hit. So as there was already a lot of low-rise units around, the zoning code simply allowed them in a lot of the city. On the other hand, Toronto was smaller when zoning arrived, so what got frozen was the dense houses of the time. Since building apartments is illegal in most areas in Toronto, even near the downtown area, they build extremely dense and tall apartment blocs in the land where they can build them. Same thing for Vancouver, but to a lesser extent as they have been allowing low-rise condos near downtown or in certain areas (like Richmond).

Here are the zoning maps for Toronto and Vancouver as proof:
The orange is zoned for high apartment buildings (condo towers and the like). The map throws a curveball in that the yellow area includes 5 different zones: Residential, Residential Detached, Residential Semi-detached, Residential Townhouse and Residential Multiple Dwelling. Most of these have limits on density that make it hard to build apartments though.

All the zones in white on that map are zoned exclusively for detached houses. Though they have allowed laneway houses to densify them through the back door. It would have been better (though politically more difficult) to simply permit the replacement of houses with low-rise apartments piecemeal. The yellow zones also allow duplexes, and that's it (be careful, what looks like yellow sometimes is pale orange, which is the "multiple dwellings" zone, for low-rise condos). The few places that allow low-rise and mid-rise conversions create an artificial land shortage for new developments near the downtown area. This increases the value of land to the point where it is so expensive that low-rise condos are actually no longer cheaper than high-rises.

Over time, the allowed housing types in the city may "infect" the culture. For instance, even Toronto suburbs keep to the central city dichotomy of tall apartment blocs in a sea of houses, whereas Montréal suburbs still build a significant amount of low-rise apartments and condos.

Anyway, I think this demonstrates my point in the last article. When your zoning restricts low-rise and mid-rise density in most of the city, you get a lot of high-rises, because that's the only way the city can keep growing with zoning as it is. Montréal had the chance of having a lot of low-rise walk-ups when zoning hit, which allows them to be built as of right, which reduces a lot the pressure to build high-rises, and offers more family-friendly housing besides houses. Consequently, though high-rises do sprout up in a few places in Montréal, they have been much less common.
Posted by simval84 at 9:20 PM