The importance of impressions: how on-street parking gives a false impression of car dominance on urban streets

On-street parking is one of the main points where I strongly disagree with the New Urbanists, I've already spoken about it a few times, but I wish to come back to it. New Urbanists tend to favor on-street parking for a few reasons:
I don't really disagree with what they say, I just think that these things are true only based on certain assumptions, basically taking a classic American suburb then tweaking it rather than really challenging its basic design. I would counter:
One of the points I would add against on-street parking, especially urban areas, is how much of a claim it represents for cars on urban streets. What I mean by that is that on-street parking leads to the near permanent presence of dozens on cars on urban streets, wherever you look, you will always notice large amounts of cars everywhere. What is wrong with that?

I think we must not underestimate the effect that impressions have on people's willingness to favor or oppose certain reforms. The fact is that the constant presence of dozens of cars on an otherwise pedestrian-oriented street gives the impression that cars are much more numerous and essential than they really are. This impression then supports the feeling that we cannot afford to take space away from cars. Cars are always occupying most of the space that was given to them, so if anything, the feeling we get is that they need more space, not less.

But in truth, on many urban streets, cars are actually pretty few, here is an example I've spotted recently, Sainte-Catherine street in Montréal, a main commercial arterial I've talked about many times. It's a one-way street with two travel lanes and parking on both sides of the street. Here are some pictures I took of it last week. This was a bit after the Friday PM peak, around 6 to 7 PM.

There's a lot of cars, isn't it? In every photo there is a least a dozen cars in the foreground. But what happens if I remove the parked cars? Sadly, I don't have Photoshop, but I'll add black blocks to cover them.

In all these cases, there tends to be one car moving per 30 to 100 meter of roadway. That's a quite small amount of cars traveling on the street. Meanwhile, the sidewalks are full, not least because about half the sidewalk is given over to trees or crap like parking meters and poles.

Any proposal to reduce the space for cars gets met with roars of disapproval and shock. And why shouldn't they? There are tons of cars parked permanently on the street, even when one leaves, another takes its place. So visually, people feel like cars actually need all of their space, meanwhile, half the sidewalk is largely empty because objects block the path of pedestrians and force them to stick to an unobstructed corridor that's only half the width of the actual sidewalk. Even pedestrians come to feel like car drivers need all the space they currently have, and maybe more.

That is part of what I mean when I say parked cars "claim the street for cars". The other part is in how they signal to pedestrians "stick to your sidewalk, on the other side of us is car space". Parked cars are like flags flying on the street, reminding us all that "the street is for cars".

Out of sight, out of mind... but when you're always in sight, how can people ever get you out of their mind?

By the way, why put objects so far from the curb into pedestrian space? My guess is because parked cars are too close to the curb, so we put poles, trees and other fixed objects far from the curb to keep a buffer between them and cars and to allow car passengers to exit without dinging their door on objects near the curb. On the other hand, if you'd have 4 travel lanes rather than 2 lanes and 2 parking lanes, since moving cars stick to the middle of their lane rather than hug the curb (people maintain buffers while driving, but once parked want their car to be as far from moving cars as possible), you don't need to put objects far into pedestrian space. 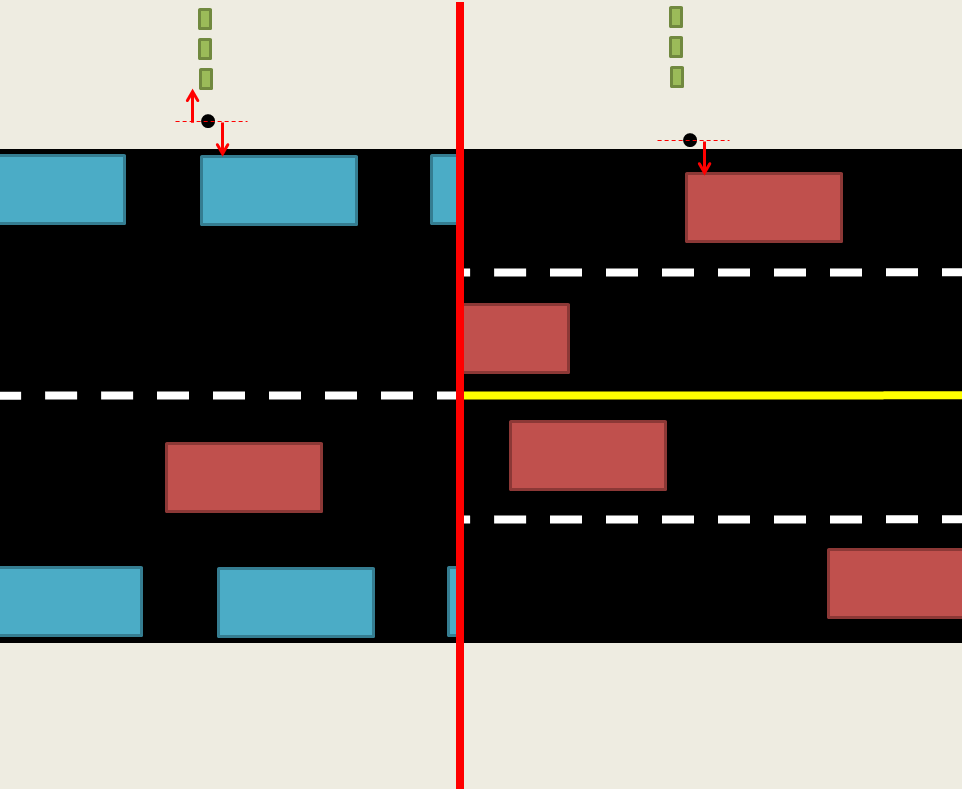 In this image, moving cars are red, parked cars are blue and pedestrians are in green. The black circle is an object (pole, tree, etc...). On the left, it's a 2-lane, one-way street with parking like Sainte-Catherine, on the right, it's a 4-lane 2-way street without parking. As the cars next to the curb are farther from it if they're moving in their own lane rather than parked, objects can be moved closer to the curb while maintaining the same buffer with the closest cars.

My point is that impressions matter, and parked cars maintain the impression that cars are far more present and essential to the health of urban areas than they really are,. If we remove cars parked on the street, I think it would make it easier to get people to support narrowing streets or to reintroduce two-way streets.

Though here I spoke specifically of one street in Montréal, I think the same observations could be made on a lot of streets all over North America.
Posted by simval84 at 4:31 PM