To setback or not to setback, that is the question

As a kid growing up in a suburb, in a bungalow on a roughly 650-square-meter (around 7 000 square feet) lot, I learned young that the house I wanted in the future was one without a lawn. I thoroughly hated mowing the lawn and saw it as completely useless. Especially the front yard, that I saw as "too public to be an effective private space, and too private to be an effective public space". Yet bylaws made sure every house had to have a large front yard because of a mandated minimum setback, a distance between the building and the curb, and a duty to respect a building line to maintain harmony so that houses' facades are built on one single line.

From the point of view of creating a good cityscape, massive setbacks are counter-productive. Not only do they often reduce density by imposing deeper lots, but they go against the feeling of enclosure that makes walking and even just being in a place comfortable.

To setback or not to setback?

First, what might the point of a setback be? When looking at the front yards of most North American homes, the answer seems to be: nothing. They are extremely rarely used for anything. Back yards are more useful and often house pools, parties with friends and the like, but the front yard is most often an empty space, just a bit of lawn, maybe one or two trees, and a driveway.

However, setbacks do serve some purpose even if they're not actively used.

For one, they provide a space between the street (public space) and the building to protect people's privacy. If you have no setback and you reside on the ground floor, you will be compelled to close the shutters in order to protect your privacy. This is seen especially in France where it's not rare for single-family homes to have essentially no setback despite having deep lots. 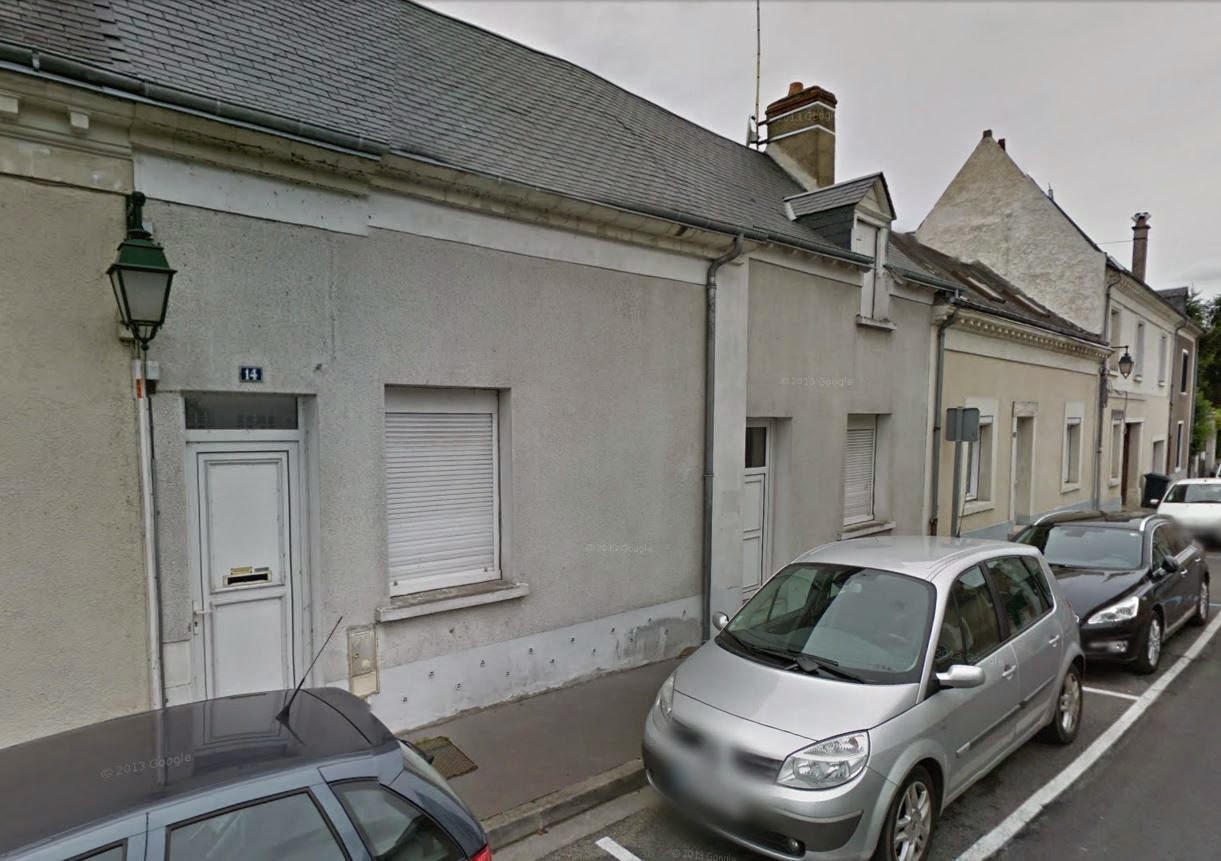 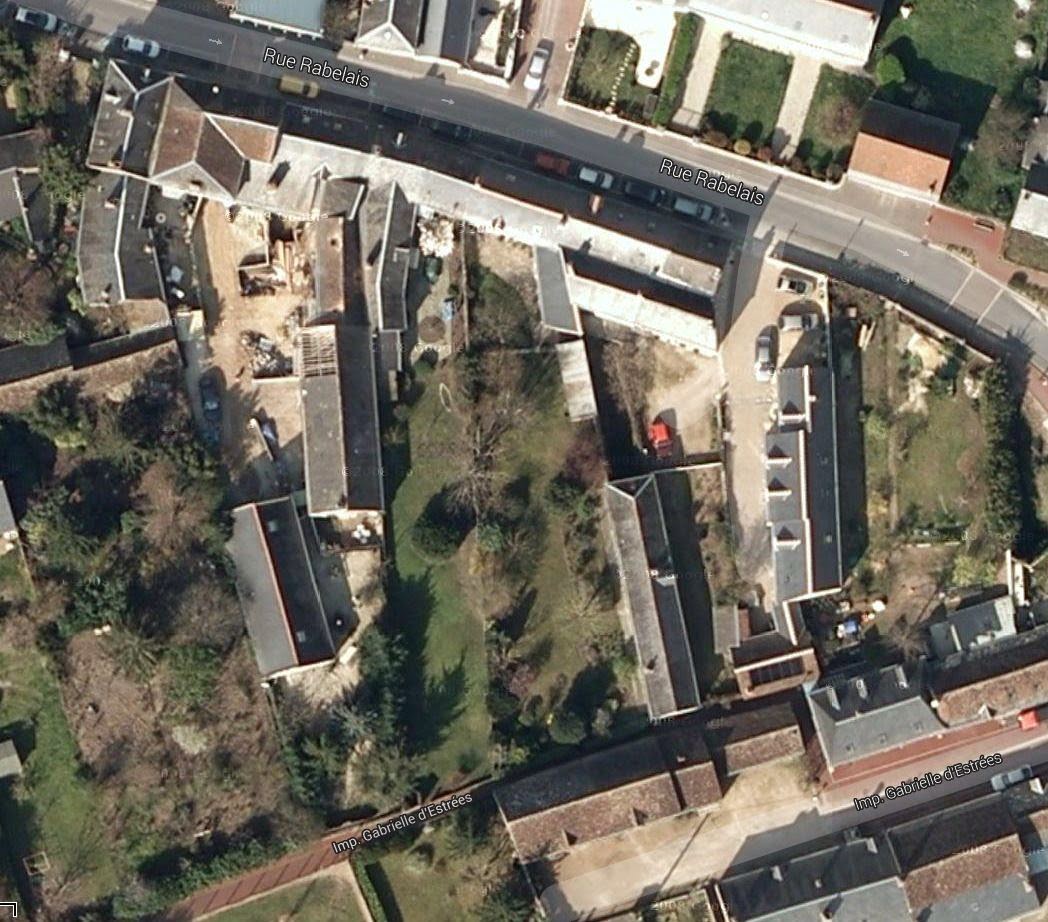 The result is that houses are almost built like besieged castles, with windows, at least on the ground floor, shuttered to protect the occupants' privacy. The walls are often bare of details. This is especially true in places where pedestrians are limited to sidewalks, thus being forced to hug the walls of buildings. With shared, narrow streets, this issue is less important as pedestrians can walk farther from buildings and are not forced to walk within arm's reach of the house's front wall.

The second purpose of the front yard is as a public facade. It allows people to participate in shaping the environment, for instance by decorating for Halloween or Christmas, or creating pleasant facades of their houses, like creating a display for themselves, some personalization of their home. I think it may be a very good thing to have in order to create a feeling of community and openness.

So I see the point for a setback for single-family houses, since there is a single owner of both the house and lot, the front yard is theirs to arrange how they see fit. For multi-family houses, setbacks aren't as important, most people tend to live over the ground floor and so do not require a setback to protect their privacy and the status of the front yard as a shared property or as the property of a non-occupant owner means that if there is one of some size, it is likely to be completely unused (a reversed tragedy of the commons if you will).

However that leaves the question about how large should a setback be?

It seems to me that most of recent setbacks are at least twice as deep as they need to be to fulfill their actual role. Looking at old single-family houses in North America built before the car, we can see that setbacks were much, much smaller, even when lots were very deep.
In all these previous examples, we can see similarities. There is a setback in most cases, but it's about 3 meters on average (10 feet). Many of these houses also have porches as a physical buffer between the public realm (the sidewalk) and the private realm (the house).

The setback has basically tripled, from 3 meters to 10 meters on average (10 feet to 34 feet). What's interesting is that, though the space has increased, people will very rarely use that additional space, when they do some work to make their facade look good, they will concentrate on the area right next to their door and leave the front half of their front yard completely bare, or with only one tree.

I think the car happened. This increase in the setback is no longer there to protect our privacy or to provide some space to build a facade, it exists to create a buffer between the building and the traffic on the street. Sometimes, they are used to park cars, but many houses have driveways built not in front of the house but to the side.

But still, cars happened in Japan and Europe too, yet they tolerate much smaller setbacks than we do, why? And why does it seem not to bother them?


What do we do that is different from these countries and that leads us to build these huge buffers?
I think the main reason is that we have frequently built residential streets to the standards of highways, with lanes 3,5-meter wide (12-feet) plus shoulders, which is absolutely ludicrous in areas where there is plenty of off-street parking and therefore cars will only rarely be parked on the street. Shoulders as a whole do not belong in urban areas.

So we have too often designed residential streets as through streets rather than as access streets. They are built to allow easy car movement through an area by providing enough space to eliminate friction with other vehicles and street users. Without friction, cars move much faster, and fast-moving cars are more dangerous and noisier than slow-moving cars. It is natural that we would prefer to be further away from them. On the residential streets of Europe and Japan, cars generally go at speeds of 30 km/h and lower (20 mph and lower) because of the narrow streets and the presence of objects close to the roadway.

Propose such streets in North America, and many people panic... yet, we have plenty of access streets that are also shared spaces in our cities, with narrow lanes and solid objects surrounding them. Want to know what I am talking about? This: 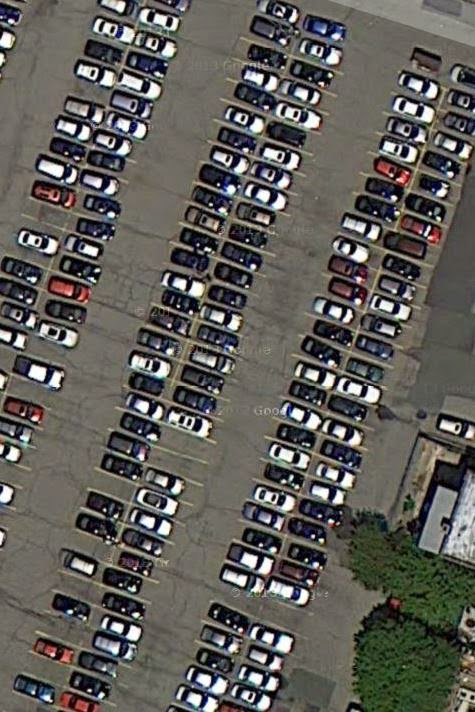 The average parking lot alley is about 6-meter (20-foot) wide, with cars right at the extremities, leaving a narrow corridor in which two cars passing each other will have to slow down. This corridor is also shared with pedestrians, making parking lot alleys a shared space. Yet in most cities, proposing 6-meter wide streets with trees right on the other side of the curb, that cars have to share with pedestrians, would likely give a few planners and engineers heart attacks. But these same people would likely have come to the meeting in cars, driven and walked in such "streets" without noticing when they parked their cars and walked to the building.

Granted, there are quite a few accidents in parking lots, but almost all of them involve cars parking or getting out of parking. Otherwise, the area is safe enough that people do not feel afraid of walking through parking lots, else no one would be driving anywhere!

Human-scaled setbacks are probably a good design for single-family homes in order to provide more privacy and a customizable space to the owner to allow them to participate in making the public realm more appealing, including participation in community celebrations (Halloween, Christmas, National days, etc...). But in most North American cities, most setbacks are much too deep as their true purpose is to create a buffer between traffic on the street and where people live. Much could be gained by narrowing the streets to make them access streets rather than through roads and reducing by half or more the current setback. Though hard to apply to built areas (well, you can narrow streets, but reducing setbacks would involve rebuilding every house), this needs to be taken to heart for new developments.

If anyone says such narrow streets are unacceptably dangerous, point out to parking lot alleys which are designed in almost the exact same way, but which no one seems scared of.
Posted by simval84 at 12:56 AM