An example of how neighborhood design matters: Lasalle vs Plateau-Mont-Royal

I spoke earlier about streetcar suburbs, using the Plateau-Mont-Royal borough as a prime example of one.  It was designed in a particular way, namely commercial areas were built around main streets on which the streetcars used to run, with high-density housing around the commercial area.

The Plateau is also a high-density neighborhood with multiplex housing that have around 20 000 people per square kilometer and over 100 units per hectare (40 per acre).

The result is a neighborhood that shows strong multi-modality, with transit and active modes of transport (Walking and biking) having very high mode shares.
Now, this was an early 20th century development, but what I've realized is that the neighborhood I currently live in, Lasalle, is essentially an adaptation of the Plateau.

Like the Plateau, Lasalle is built with a commercial zone on its main streets, with residential areas flanking the commercial zone. There is also a hgih-frequency bus line that runs down main streets, for the biggest street, the Newman Boulevard, that line is the 106, that has around 250 buses traveling its two directions every day. During the peak hour, the buses have an headway of 3 minutes, for around 1 000 passengers per hour per direction in capacity. There are also additional bus lines on side streets.
The Plateau's form of housing is Québec's traditional multiplex with outside stairs and each unit having its own door to the outside. Well, Lasalle's main housing form is a form of the multiplex, but adapted to the era of the car, with front-loading or side-loading garages in order to fulfill minimum off-street parking requirements (of 1 per unit).

So there are plenty of similarities:
So how does Lasalle fare in mode share?

Not that well actually. I mean it's still pretty good in a North American context, but it's nowhere close to the Plateau:

So Lasalle has twice the car use rate as the Plateau, and three times as high for internal trips. The number of transit trips is much closer, but walking and biking take a severe drop.

Exploring the reasons why Lasalle fares much poorer than the Plateau is important to underline the point that, in terms of urbanism, urban design matters. It doesn't suffice to have the same blocks to achieve the same result, the interaction between these blocks are vital.

Why Lasalle is no Plateau

One of the biggest differences between Lasalle and the Plateau is the street network. The Plateau famously had residential streets going straight to the commercial main street without any detour. Lasalle on the other hand has a street network built to favor speed on the main streets by reducing the number of intersections, and so the porosity of the street network. It also created streets to discourage through traffic in residential areas. In fact, on average there is one intersection every 50 meters (170 feet) on commercial streets in the Plateau, but only one every 250 meters (800 feet) in Lasalle. 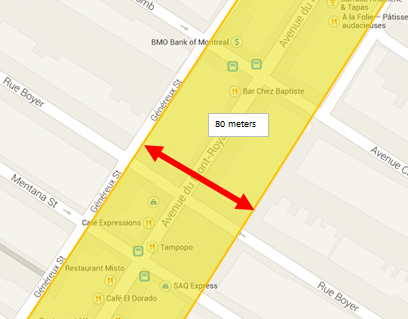 In Lasalle, it is three times as wide, at around 250 meters, with little or no housing therein. 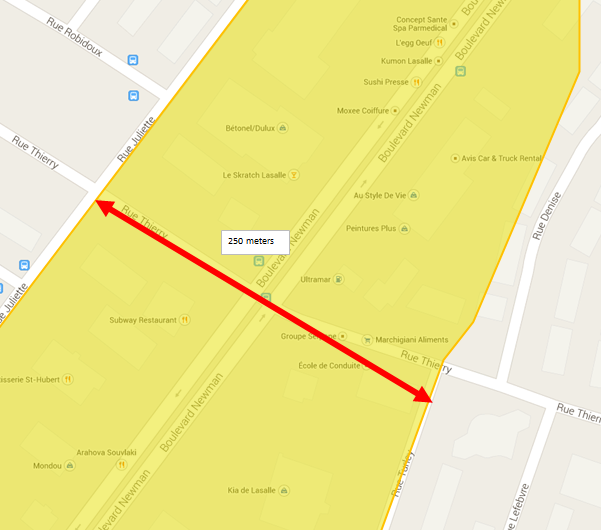 The Newman Boulevard is also a 6-lane boulevard with a median, which is hard to cross for pedestrians, unlike the Avenue Mont-Royal in the Plateau, which adds another barrier to pedestrians and cyclists. The result of this is that there are very few people who reside within 300 meters of any business in Lasalle. Even if you have high-density housing, if it's located beyond comfortable walking distance, you're not much better off in the end.

This is crucial because the decision to walk is very distance-sensitive. People within 300 meters (1000 feet) of their destination are unlikely to do anything but walk to it. But beyond that, walking mode share falls very quickly. Having residential areas built right next to commercial destinations and having residential areas built at 300 meters from commercial destinations, supposing a density of 20 000 people per square kilometer, is probably the difference between having 10 000 people who would opt to walk and having just 5 000 people.

Lasalle is also not comfortable to walk, as you can see from the pictures above of the typical Lasalle housing, streets are generally very wide, with pedestrians stuck on narrow sidewalks between cars parked on the street and driveways on which cars are sometimes parked, with few trees around. As to the commercial street, it is nothing short of a disaster in Lasalle, with huge parking lots in front of 1-story buildings where each unit tend to be wide but shallow, the opposite of the narrow but deep commercial units of the Plateau.
So not only is the commercial street harder to access, but once there, walking alongside it is a chore, not a pleasure. The presence of plenty of free parking also incites people to take their car, whereas parking in the Plateau is rarely free.

Some commercial malls are also built with barriers separating them from residential areas, like I talked about in my most recent post. 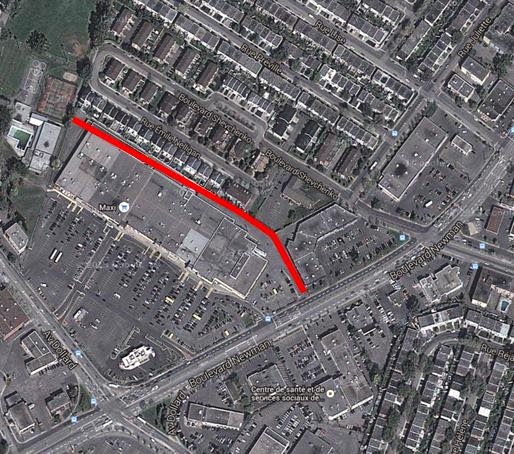 What I hoped to illustrate in this blog post is that good urbanism requires good urban design and to provide an example of the consequences of the barriers and detours between uses and of the dendritic street network that favors vehicular speed over providing direct access and short distances. Despite the Plateau and Lasalle having many basic similarities in terms of design and housing, due to the differences in street network and in the fine details of the urban environment, the walkability of Lasalle is much inferior and results in the dominance of the car as a mean of transport.

So it doesn't suffice just to build dense residential areas or to put them adjacent to commercial areas and providing transit lines along commercial avenues. Design matters.
Posted by simval84 at 11:35 PM