What place for buses in a properly designed city?

One thing I noticed quickly when I found a document grouping together trip surveys for many Japanese cities was how low bus mode share was, everywhere, almost never more than 10%, even in big cities often only 3 or 4% of trips were made on buses. That led me to wonder why it was so low.
One explanation is that the Japanese attitude towards transit, namely that it always must pay its own way rather than seeing it as a public service that deserves subsidies hurts buses a lot. For instance, recently the Tokyo Metropolitan government canceled a night bus route for having run a 34 000$ deficit in the last year... keep in mind the average subsidy per bus route in New York City is 7,3 million dollars a year. To pay back their operating costs, they either put fares that are too high, discouraging use, or have little to no service outside of peak periods. Which is a pretty bad news for the efficiency of buses.

Another may be that most Japanese cities have very few straight roads, and to offer good service levels (good speed and comfort), buses need the same type of road that cars need: straight, wide with high speed limits (the same kind of road we largely do not want in our cities). Yes, if you want fast buses, you need the same kind of streets that leads to fast cars. These are often rare in Japan... but there are exceptions, like Kyoto, which follows a grid of wide avenues built in an Imperial Chinese style, and the cities of Hokkaido (Sapporo, Asahikawa, Obihiro, etc...), and buses aren't much used there either. The lack of bus lanes certainly do not help, as I wrote about, congestion is the main transit killer as it lowers speed, makes it less attractive and makes operating costs higher.

Thinking about it more, I think I have come to a conclusion that some people may not like very much: buses simply do not have a large role to play in a properly designed city.

What is a properly designed city as I say it?

A properly designed city as I describe it is a city that has the following features:

My demonstration, a mode race

So let me do a quick exercise here, a race if you will between different modes of transport. First, let's start between walking, at 5 km/h on average, a bus, supposing a high frequency of one bus per 6 minutes and frequent stops, going at a commercial speed of 15 km/h (about average for buses in urban areas) and a subway, going at an average of 35 km/h, at the same frequency as the bus. The transit modes both require walking to and from stops, which compound the wasted time in their trips. (divide by 1,6 for mph)

The three colors on the vertical scale represent the zones where each mode is faster than the two other modes. Basically, it means that below 800 meters (half a mile), walking is the fastest mode of all three, buses are fastest between 800 meters and 1 500 meters (roughly half a mile to a mile), for anything above that, subways, if present in the traveling corridor, are faster.

That is pretty dire situation for buses. They're almost perfectly squeezed out between just walking and subways, only the absence of subways can save them, but if the cities follow a transit-oriented development pattern along subway lines, it's not good for them.

Worse, in the following, I will add bikes in there, the green line: 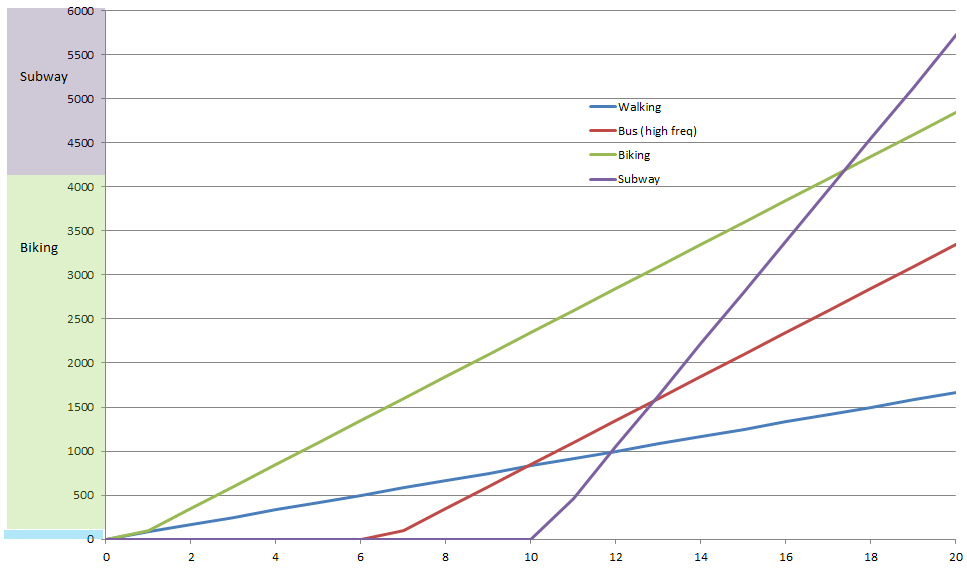 Here, bikes completely squeeze out buses, and not just by a little. They also squeeze out walking. They do so largely because of the absence of waiting time or need to walk to a given stop and having roughly the same speed as buses.

The only thing that saves buses is that not everyone wants to bike or even can. Cyclists are exposed to elements and are rarely given adequate infrastructure to travel upon, and some people are disabled and unable to bike for long periods of time. Some people may find biking too exerting or dangerous, or hills can convince people not to bike.

But even if we ignore bikes it still looks pretty bad for buses. With buses being slower than walking for distances under 800 meters, that means that the walkshed of any given point, supposing a grid, would look like this:
That area is 1,3 square kilometer. Supposing a residential density of 6 000 people per square kilometer, the lower end of what I considered a "well-designed city", that's about 8 400 people living in that area, and up to 26 000 people using the higher end of the residential density I described. If you have proximity stores or neighborhood stores like groceries, in a well-designed city made to reduce distances, you'd get a pattern of nodes of neighborhood stores looking a bit like this:
If I were to draw the "catchment area" of each store, they would look like diamonds or hexes of semi-regular dimensions, so that everyone lived within about 1 kilometer maximum from the nearest grocery, which is barely out of the zone where walking is faster than buses. So the vast majority of people in Kooriyama can get to the closest grocery faster on foot (or on a bike) than they could on a bus, even supposing there was a bus line taking them straight to the grocery.

My home suburb of Boucherville has 5 groceries for a population of 40 000 people, that's 8 000 people per grocery, so that means that the walkshed I illustrated above would have enough population to sustain one grocery store even at the lowest acceptable density of 6 000 people per square kilometer. Restaurants and convenience stores and other neighborhood stores could also be present as they require even less potential customers to subsist. The result is that most daily needs could be satisfied with trips of a distance of less than the 800 meters under which walking is faster than buses. Using transit would only be required for longer trips like for commutes or to go to malls with specialty stores (electronics, large clothing stores, etc...).

That's not even mentioning cars here.

So overall, it seems like buses are not really destined to be a major mode of transport in a well-designed city. For most neighborhood trips and trips to local stores and restaurants, walking would likely be faster than taking a bus, no matter how frequent they are. We can see this with the mode share of Japanese cities, or even with the mode share for internal trips in the Plateau-Mont-Royal neighborhood I spoke of in my article about streetcar suburbs:
If you create an entire bike path network like what is seen in the Netherlands (or in Japan considering they shamelessly use their wide sidewalks on arterials as multi-purpose paths), local buses will never be widely used. That's the case in cities in the Netherlands that lack tram services and other forms of rapid transit like Eindhoven, which has a 40% mode share for bikes, but only 5% for public transit (source). However, rapid transit can still be dominant for long distance trips in such a case, especially for commuting.

That's not to say that buses are irrelevant for urbanism. They still fulfill a niche role of providing mobility to those who have trouble walking or during climatic conditions where people do not want to walk, much less bike, long distances. However, as I said in my earlier comparison between Sapporo and Montréal, a very high mode share for local buses is probably not a good sign in terms of urban planning and sustainable urbanism and likely a symptom of poor zoning and of an automobile-centered urban design that forces people to use motorized vehicles to get around even for short local trips. Buses can also suffice for small cities that are relatively compact so that they do not justify investing in rapid transit, but even then, investment in biking facilities could probably yield better results.
Posted by simval84 at 9:46 PM